Netflix (NASDAQ:NFLX) has stepped up its efforts to grab a larger piece of India's booming video-on-demand market, where it has fallen behind local players and Amazon's (NASDAQ:AMZN) Prime Video service.

So far, it looks like Amazon has a better understanding of the pulse of the Indian customer as it has racked up an estimated 9.5 million Prime Video subscribers there since launching in December 2016, while Netflix is estimated to be languishing at just 4.2 million subscribers despite being in India for over a year.

Netflix's growth in India has been hampered by premium pricing (INR 500 per month for standard definition, or $7.75 at the current exchange rate) and a limited content library. Amazon, on the other hand, offers its video subscription service as part of Prime for around $8 a year. So it doesn't make sense for a customer to choose Netflix given the shortage of content.

However, Netflix is now looking to mend its biggest weakness to make its service more attractive to Indian customers. 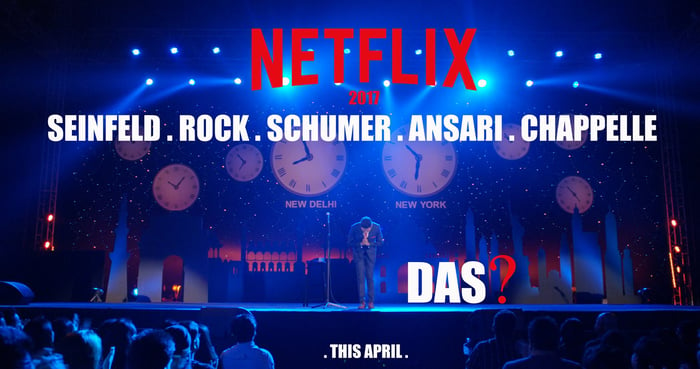 Netflix steps on the gas in India...

Netflix is reportedly ramping up its investment in India this year to drum up more content and compete with Amazon's ever-growing online library. The online streaming giant could spend as much as $300 million on new, India-focused content, according to livemint.com. Netflix had originally made just 7% of its total library available in the Indian market, giving it a major setback in acquiring subscribers.

But it is now ready to stream its first India-specific comedy special -- Abroad Understanding -- featuring well-known Indian comedian Vir Das. This is the first original production from India to be featured on Netflix globally, and should ideally lead to subscriber growth as comedy is the second-most watched genre in India.

Additionally, Netflix users in India can start streaming content produced by Red Chillies Entertainment and Viacom 18 Motion Pictures -- two well-known production houses in India -- from the current quarter onward. The Red Chillies deal will allow Netflix to exclusively stream 30 movie titles, along with any new films produced over the next three years.

Netflix's dynamic optimizer technology will reportedly allow subscribers to stream 30 hours of content at the expense of just 2 GB of data, without compromising the apparent quality of the content. This will be useful in the Indian context as data costs are high as compared to other nations.

Netflix has been slow to develop its content library in India as Amazon Prime Video has taken the market by storm. Amazon has a diverse library of more than 50 Indian movies, and is on track to produce 18 new original shows for this market.

What's more, the e-commerce giant is reportedly going to spend $75 million this year on developing India-specific content, having already tied up with 15 production houses in the country. Additionally, Amazon's investment toward developing local content is greater than that of domestic rivals Hotstar and Voot, indicating its aggressive stance in this market.

Amazon's improving content library and cheaper subscription plan give it an inherent advantage over Netflix, and the gap may widen if the latter doesn't do something about its pricing. Of course, Amazon will increase the price of its Prime service in India to INR 999 (roughly $15.50 at the current exchange rate) per year once the introductory offer is over. But even then it will be much cheaper than Netflix, which might find it difficult to grow its subscriber base despite huge investments.