Despite a second consecutive record-breaking quarter, Intel (NASDAQ:INTC) -- even after increasing guidance for the current period by $500 million and its leading position in the data center market explosion -- hasn't done much for its shareholders. With its stock price down nearly 2% in 2017, Intel clearly hasn't won over industry pundits, which is one reason the best is yet come.

Like many out-of-favor tech stocks in today's digitized world, Intel is undergoing an across-the-board transformation away from a reliance on PCs -- though the market remains surprisingly strong -- and become a data center first provider. Reaping the rewards of CEO Brian Krzanich's plans for Intel's future, however, requires patience, which is not something every investor possesses. But for those who do, Intel warrants a good look. 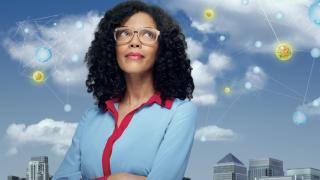 In some respects, Intel is a victim of its own success as it relates to the PC market. Long hailed as a "dying market" by pundits, Intel's record-breaking quarterly revenue is seen by some bearish investors as a short-term positive. To those that believe the PC's best days are behind it, Intel's fortunes are inexorably linked.

Of Intel's $14.8 billion in revenue to kick off the year, $8 billion was from its client computing group, home of PC-related sales. Thing is, the 6% year-over-year increase in PC revenue was matched by a 6% jump in data center sales to $4.2 billion.

Last quarter also included an 11% improvement for another key unit, the Internet of Things (IoT), to $721 million and an impressive 55% gain in its non-volatile memory division to $866 million. Combined, these critical aspects of Intel's transformation make up a larger piece of the revenue pie with each passing quarter. If there was anything bearish about Intel's first quarter, it was the 1% drop in data security revenue to $534 million.

With the advent of IoT -- which seems much more than a passing fancy -- and the cloud, the sheer volume of data available today is almost unimaginable, and it still growing. One estimate suggests that data centers will generate over $32 billion in sales in three years.

In addition to powering the world's cloud-based data centers, Intel's growing security segment represents a significant opportunity. Even though the security segment accounts for a relatively small part of total revenue, Intel's results there still disappointed and are worth monitoring in the quarters ahead.

Beyond data centers and IoT, Intel also has plans to make a splash in cutting-edge markets including artificial intelligence (AI), self-driving cars, drones, and virtual reality (VR). Of course, some of Intel's largest competitors including NVIDIA (NASDAQ:NVDA) also have plans to conquer these same markets.

NVIDIA's latest graphic processing units (GPUs), the GeForce 1070 and 1080, are already VR industry standards and they're winning over customers including HP and its new OMEN gaming PC. Self-driving cars are also on NVIDIA's radar, just as they are for Intel.

If there were any doubt about Intel's commitment to autonomous cars, its recent $15.3 billion deal for Mobileye should put them to rest. Intel's push into new opportunities are key components of why the best is yet to come, but there are also more immediate reasons.

By virtually every valuation method, Intel stock is exceedingly inexpensive relative to its peers. One measurement often used for comparison's sake is the price-to-earnings (P/E) ratio. On a trailing basis, Intel is valued at a touch over 15 times earnings, compared to the industry's 25 times. Looking ahead offers an even better view of Intel's relatively inexpensive stock price.

On a forward P/E ratio basis, Intel is trading at a minuscule 12.6 times earnings. There's also the not-so-small matter of its 3% dividend yield to help ease investors' wait as its transformation continues. Record sales, cutting-edge new markets, and extreme value are why the best is yet to come for Intel.