Please ensure Javascript is enabled for purposes of website accessibility
Log In Help Join The Motley Fool
Free Article Join Over 1 Million Premium Members And Get More In-Depth Stock Guidance and Research
By Leo Sun – May 15, 2017 at 3:42PM

InBev, Diageo, and Molson Coors can easily cover your beer tab with their dependable dividend payments.

Alcohol stocks are often considered non-cyclical and recession-resistant plays. But in 2015, annual global alcohol consumption dipped for the first time in nearly two decades, and the industry faces new headwinds like growing craft beer brands and the threat of higher import taxes.

Yet alcohol stocks still remain fairly reliable investments for conservative investors, and several of the top names in the industry are also dependable dividend plays. Let's examine three beer stocks which can definitely cover your beer tab every year with their dividends. 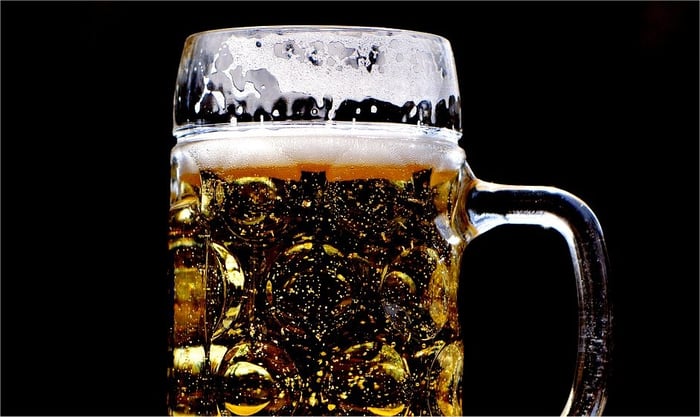 InBev's quarterly revenue has risen by over 30% annually over the last two quarters, and Wall Street expects it to post 26% growth this year. However, most of that growth can be attributed to the completion of its merger with SABMiller last October. Its earnings are expected to jump 49% this year.

But after those annual comparisons normalize, analysts expect InBev's revenue and earnings to respectively rise 4% and 15% next year, fueled by the ongoing "premiumization" of its top beers. That bottom line growth should give it plenty of room to continue its seven year streak of dividend hikes. InBev currently pays a forward dividend yield of 3.6%. Its payout ratio currently exceeds 100% due to the SABMiller purchase, but it should drop to more sustainable levels after its operations are fully integrated.

London-based Diageo's (DEO -2.93%) portfolio of alcoholic beverages includes Johnnie Walker, Crown Royal, Smirnoff, Captain Morgan, Baileys, Tanqueray, and Guinness. Its vodka, rum, and ready-to-drink sales have been tepid this year, but that softness was offset by robust sales of spirits and beers. 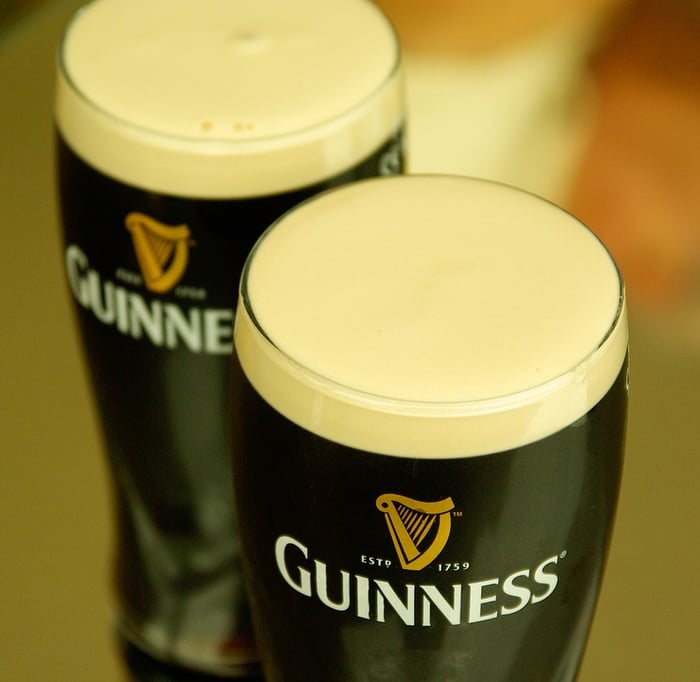 Diageo's revenue rose 14.5% annually in the first half of fiscal 2017. Much of that growth was attributed to Brexit fears devaluing the pound, which boosted Diageo's revenue from overseas markets. On an organic basis -- which excludes currency impacts, divestments, acquisitions, and other one-time charges -- Diageo's revenue rose 4%. Its adjusted earnings grew 21% during that period.

Wall Street expects Diageo's revenue and earnings to respectively rise 14% and 19% this year. Diageo currently pays a forward dividend yield of 2.5%, which is supported by a payout ratio of 61%. Diageo has hiked its dividend annually for nearly two decades -- making it a solid pick for conservative income investors.

At first glance, Denver-based Molson Coors' (TAP -2.99%) forward yield of 1.8% seems less impressive than InBev and Diageo's yields. Yet Molson Coors has two potential advantages over both companies. First, its lower payout ratio of 17% gives it more room to hike its dividend -- although it hasn't done so since 2015. Second, it pays a quarterly dividend, compared to InBev and Diageo's semi-annual ones -- which might matter to investors who need steady income.

Molson Coors' reported revenue (which includes MillerCoors in year-over-year comparisons) fell 2% and its non-GAAP earnings rose 2% last year. But for the current year, Molson sales and non-GAAP earnings are expected to respectively rise 1% and 7% as the company eliminates redundancies and scales up its business.

Alcohol stocks are decent defensive plays for a volatile market, but they often underperform the overall market. The S&P 500 has risen about 17% over the past 12 months, compared to InBev's 4% decline, Diageo's 10% gain, and Molson Coors' 5% drop. Therefore, investors should note that while alcohol stocks can be reliable income generators, they are often overlooked during bull markets.