It's not unusual to hear negative opinions about Tesla, Inc. (NASDAQ:TSLA), whether it's that the company is wildly overvalued, trying to do too much with acquisitions such as Solar City, facing emerging culture issues, or burning through cash and diluting shareholders with capital raises. But one person you probably never expected to lose enthusiasm for Tesla would be one of the automaker's largest supporters on Wall Street: Morgan Stanley analyst Adam Jonas.

On Monday, Jonas wrote a note to clients that detailed concerns about increasing competition from tech companies and lowered his rating on the automaker from overweight to equal weight. For those not familiar with the terms, "overweight" simply indicates that a stock is expected to produce a greater return than the average in its industry, while "equal weight" indicates it's expected to perform in line with its peers. While it's not unusual for Wall Street analysts to flip opinions and ratings on companies faster than you can flip your pillow to the cool side, this downgrade was a surprise since it comes from perhaps the most bullish Tesla analyst out there.

"The bull case on Tesla is that it can become the next Amazon or Apple. We see such firms as competitors ultimately. We question whether the risks of going head-to-head vs. the tech giants is sufficiently discounted in the price," Jonas wrote in the note to clients, according to CNBC. "We expect much larger and more well-capitalized competitors to unveil strategies that directly address sustainable transport and mobility." 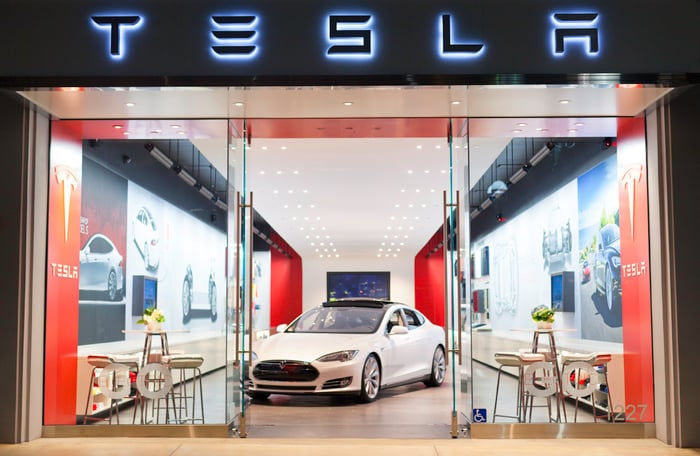 And sure enough, the downgrade quickly hit the news feeds and Tesla's stock stumbled a slight 2%-3% during intraday trading. But file that under "stocks go up, and stocks go down," and keep in mind that Tesla has been soaring so far in 2017. 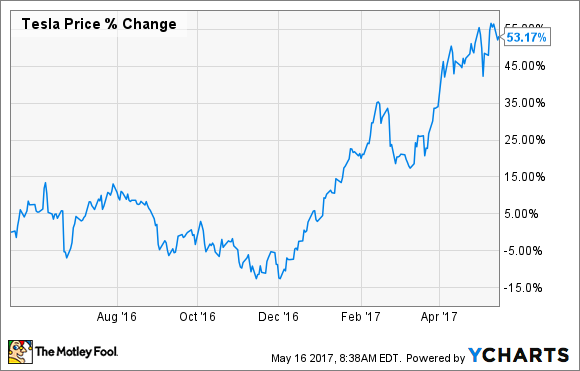 Of course, no one knows for certain what the future will bring for any stock. But the truth is, Jonas' stance is probably an accurate reading of the situation. It's fair to say that many investors didn't anticipate competition heating up so quickly. Perhaps they believed that massive technology companies would be cautious entering into the automotive world, or that ancient automakers would adapt too slowly. Instead, tech companies have quickly entered into partnerships to develop autonomous-driving technology, and automakers such as General Motors (NYSE:GM) have quickly adapted to electric vehicles and smart-mobility projects.

Let's take General Motors as an example: It just announced that its Maven mobility brand has logged over 125 million miles driven across all Maven products. In only a year and a half since its inception, Maven is offering its on-demand car services in 17 cities across North America. The company also launched the Chevrolet Bolt EV, with an EPA-estimated range of 238 miles, and has plans to use it in ridesharing services in California. You could argue that the Bolt is really a forward-looking product, rather than a Tesla fighter, anticipating a day when GM's partnership with Lyft blurs the lines between selling cars and sharing them as a service. GM is adapting at a rate few would have foreseen only a few years ago.

In a way, Tesla's stock has made many investors wealthy merely as a story stock, not based on its fundamentals or financial success. And it's true that bursting onto the scene as a young automaker and kick-starting an evolution toward electric vehicles and autonomous technology is a phenomenal story. But the euphoria behind that story won't last forever. Perhaps in the coming years Tesla will stop burning through cash and its Model 3 will succeed beyond expectations, but if a longtime bull like Jonas is tempering expectations, it's clear that the story is becoming tougher to buy into without evidence of results.