Please ensure Javascript is enabled for purposes of website accessibility
Log In Help Join The Motley Fool
Free Article Join Over 1 Million Premium Members And Get More In-Depth Stock Guidance and Research
By Daniel B. Kline - Updated May 18, 2017 at 1:31PM

There's a correlation between customer service and stock price, but the impact can vary by industry.

In recent years, the American public has learned about a number of major companies having inexcusable breaches in customer service. For example, United Airlines' (UAL -3.40%) botching of the removal of a customer from one if its flights certainly got a lot of media attention. Those reports, and CEO Oscar Munoz's early poor handling of the situation made the company the subject of late-night talk show jokes and cast it as a sort of poster child for bad corporate customer service.

What the situation did not do was impact the company's stock price. United Airlines shares did dip in the immediate aftermath of the bad news, but they have since recovered.

That's markedly different from what happened with Chipotle (CMG 0.20%) after its 2015 E. coli scandal. That company not only saw its stock price fall, but sales plummeted as customers stayed away. The same can be said, albeit on a slower timetable, with Wells Fargo (NYSE: WFC) after its fake account scandal.

The United situation may be an anomaly or it could just take more time for the impact to be felt in its share price, according to Phil Bak, CEO of ACSI Funds, a sister company of the American Customer Satisfaction Index (ACSI). He told The Motley Fool in an email interview that treating customers poorly generally does drag share prices down.

"Our research has shown a direct correlation between changes in customer satisfaction levels and subsequent earnings surprises, which stands to reason since the customers are the people who directly contribute those earnings to public companies," he wrote. 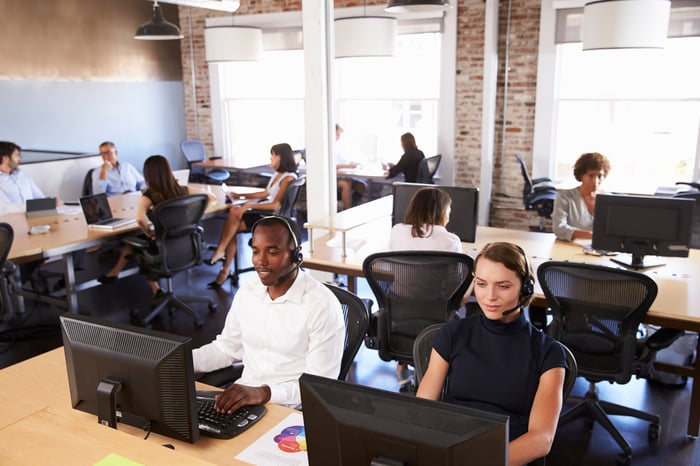 Sometimes you have to wait

Even with all the negative attention surrounding United, it's not easy to cancel a travel plan and book it with another airline and in most cases there are fees involved. In addition, some flyers, even if they want to punish an airline, or fear flying with it, may have limited choices when it comes to reaching their destination of choice. That, according to Bak, can give companies a lag before drops in customer satisfaction levels impact earnings.

"Ultimately, as we are seeing now with cable companies and certain airlines, no company can suffer dissatisfied customers forever," he wrote. Bak explained that it's easier for a customer to avoid a restaurant he or she has a bad association with than it is to go to a new bank or in some cases switch airlines.

"When Chipotle is in the news with food poisoning complaints, it can have an immediate and dramatic effect," he wrote. "On the flip side, when Wells Fargo had issues, the damage was contained since changing banks is a significantly more involved process."

It hurts in the long run

While the impact of treating customers poorly is not easy to measure, Bak said his company's research shows it does eventually catch up. That may not mean a company tanking in the stock market, it could just mean a successful brand like Comcast (NASDAQ: CMCSA) not being as successful as it could.

"Citigroup analyst Jason Bazinet estimated that a 10-point improvement in the ACSI would translate to an increase of 500,000 basic video subscribers for Comcast," Bak wrote, citing a Reuters article.

Essentially, by having poor customer service, Comcast either lost or never added customers it might have kept had it treated them well or gained if it had good word of mouth. Adding 10 points is not an inconceivable target for the brand either, as it scored a 62 in subscription television, eight points below the top score, and a 59 as an ISP, well behind the leading 2016 ACSI score in the category of 73.

Bak believes that many people, especially analysts in the business of picking stocks, make things too complicated. He wrote that it's important for people to not lose sight of the fact that they are investing in tangible goods or services that people interact with.

"Valuation matters, but there is nothing more important when forecasting a company than the question of whether their customers are happy and willing to continue doing business with them," he wrote. "Good customer satisfaction also leads to word of mouth referrals, and also allows the company to have pricing power over their customers."

Essentially happy customer, equals happy company. If a brand chooses to ignore that the impact may not be immediate, but if customers get the opportunity to hold them accountable by taking their business elsewhere, they generally do.