Shares of Advanced Micro Devices (NASDAQ:AMD) dropped on Wednesday in reaction to the company's Analyst Day event Tuesday afternoon. While AMD revealed new information about upcoming products and laid out long-term financial targets, investors were left underwhelmed. The stock declined as much as 9.7% Wednesday morning, settling into an 9.25% loss by 11:45 a.m. EDT.

AMD laid out its plan to return to profitability. The company expects to grow revenue by a low double-digit percentage in 2017, with the bottom line boosted by a rising gross margin. Positive non-GAAP net income is expected, although AMD didn't provide a specific target.

AMD expects to continue to grow revenue by a double-digit percentage annually through 2020, with gross margin rising above 40% and non-GAAP EPS reaching $0.75. A focus on premium products with high margins will be the driver behind the growth. 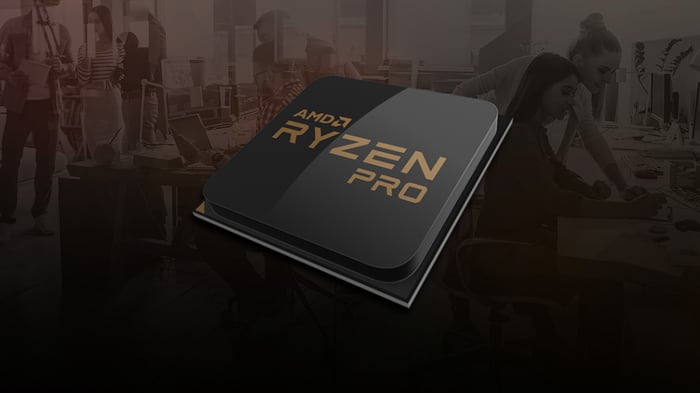 In terms of products, AMD announced that Ryzen Mobile and the commercial orientated Ryzen Pro will be launching in the second half, and the 16-core Threadripper desktop CPU will be available in the summer. AMD also announced the first product built around its high-end Vega GPU, the Radeon Vega Frontier Edition, which targets professional applications. EPYC, AMD's upcoming server processors previously codenamed Naples, will launch in June.

There are two things that could be responsible for driving down AMD's stock price on Wednesday. First, the stock already traded for 17 times what the company hopes to earn in 2020 going into Wednesday, a valuation investors may be realizing is too optimistic. Second, AMD failed to confirm a rumor that emerged on Tuesday that it had struck a graphics licensing deal with Intel. The lack of confirmation could mean that it's still nothing more than a rumor.

AMD is targeting the premium segment of both the PC CPU and GPU markets, where it will face stiff competition from Intel and NVIDIA. In the server CPU market, it will need to show its customers that its EPYC CPUs offer a clear value proposition compared to Intel's offerings. If any part of that plan gets derailed, AMD will miss its long-term targets, which are already baked into the stock price.

The slump on Wednesday is another instance of investors realizing that the optimism surrounding AMD was overdone. The stock nearly quadrupled in 2016, but it took a hit after a lackluster first-quarter report, and it's taking another hit after the long-term outlook simply wasn't enough to justify the stock price.

AMD may outperform its targets, with its new products performing better than expected. But the company has a history of over-promising and under-delivering, so I wouldn't bet on it.