Please ensure Javascript is enabled for purposes of website accessibility
Log In Help Join The Motley Fool
Free Article Join Over 1 Million Premium Members And Get More In-Depth Stock Guidance and Research
By Daniel Miller - May 18, 2017 at 9:10AM

Unlike Ford's earlier report of rebounding sales in China, results out of its Euro 20 did the opposite in April. Here are the details and highlights from Ford's results in Europe last month.

At a time when rumors of Ford Motor Company (F 3.68%) planning to cut a potentially large chunk of jobs are swirling -- though the company has only confirmed it would start by offering about 1,400 employees a voluntary early retirement option -- investors could use a bit of good news from the automaker. Unfortunately, one market that has been doing well for Ford this year, Europe, didn't provide a bright spot for an otherwise gloomy couple of weeks.

Ford's sales in its traditional 20 European markets (Euro 20) dropped 11% during April, down to 100,800 units. That cut its market share in those markets by 30 basis points, down to 7.3% for the month. Much of the pain was felt with Ford's passenger vehicle sales, which were down 13% in April compared to the prior year, but still accounted for roughly 75% of its total sales. Ford's commercial vehicles made up the rest of the company's sales but were also down 5% compared to last year's April. If investors are looking for a silver lining, it's that Ford's SUV lineup continues to gain traction in a market that has historically favored smaller and less profitable vehicles.

To that point, Ford of Europe's vice president for marketing, sales, and service, Roelant de Waard, said in a press release:

The strength of our SUV lineup was on full display in April as customers flocked to the complete range made up of Kuga, EcoSport and Edge. ST Line models sold especially well, and more than one in five Edge SUVs sold is a Vignale. SUV sales supported the growth of our market share in three of our largest European markets by sales volume -- Germany, Turkey and France.

What's important for investors looking at Ford's international markets is for the automaker to be able to generate better bottom lines using options and trims, because it can't rely on massive full-size truck sales to inflate its earnings. In that vein, the improvement in SUV sales is encouraging. 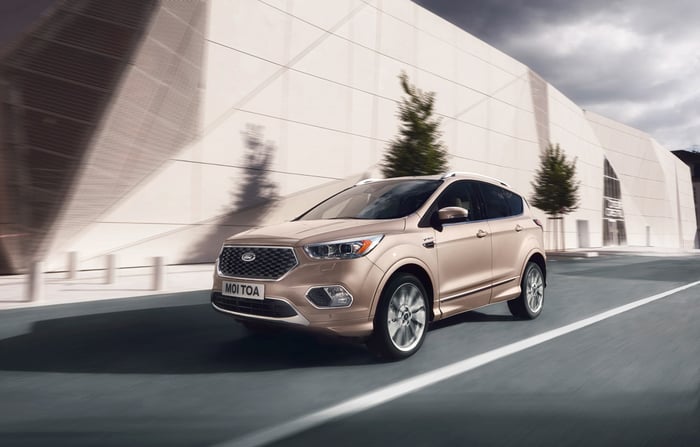 Digging into the details, Ford's SUV sales were up an impressive 17% to 17,300 units in April, again driven by strong demand for the Kuga (Escape), EcoSport, and Edge, and its market share in Germany, Turkey, and France increased to 7.8%, 12.4%, and 4.5%, respectively. The champion was really Ford's Kuga, which posted a 14% sales increase during April to 11,200 vehicles -- its best April since launching in 2008.

Another highlight in Ford's effort to improve profitability is sales of its high-end models. Titanium, Vignale, ST-Line, ST, and RS combined to generate 65% of Ford's passenger vehicle sales in Euro 20 last month, up 400 basis points from the prior year.

While Ford's Euro 20 sales in April took an 11% dive, its full-year sales are still up 4.6% compared to the prior year, which is better than the industry average of 4.1%. On the flip side, Ford's sales in China, which were down 19% through the first three months, rebounded for a much-needed 11% increase during April. And while Ford's sales in two critical markets are reversing direction, and scrutiny on the company's strategies is forcing Ford to make decisions such as cutting its workforce, investors would be wise to stay calm since much of the negativity has been priced in for some time.