Finally, Ford Motor Company (NYSE:F) investors have some good news out of China. After steep sales declines through the first quarter, it became evident that the country's increase in purchase tax, from 5% to 7.5%, was hurting demand for Ford vehicles. Most investors assumed the crippled demand would rebound at some point during 2017, and if April is any indication, that rebound could be sooner rather than later.

Ford and its joint ventures sold just under 94,000 units in China last month, a much-needed 11% increase after a decline of 19% during the first three months of 2017. Despite a rebound in April, Ford's year-to-date sales in the country remain 12% lower year over year, but April's results could signal that demand is back to normal.

"Ford sales bounced back strongly in April in China with gains across our lineup. The overall market remains strong and we expect to gain momentum as the year continues as we launch new products and new models to our existing lineup, like the Edge EcoBoost 245 Sport and Focus CTCC Edition," said Peter Fleet, Vice President of marketing, sales, and service for Ford's Asia-Pacific region, in a press release. 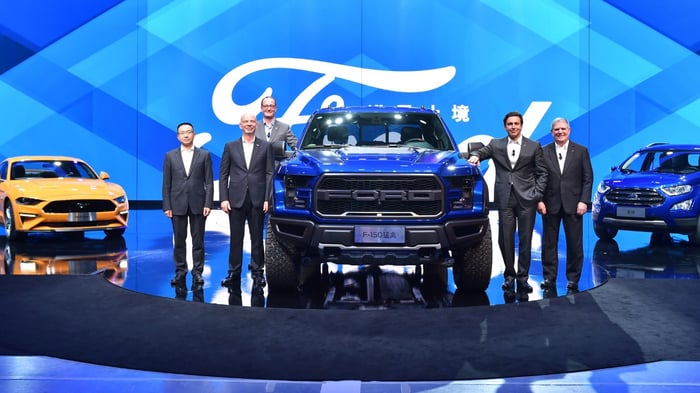 The increased purchase tax hit Ford harder than many of its competitors simply because the incentive was allowed on roughly 70% of Ford's lineup -- the tax (which had previously been halved, from 10% to 5%) was on vehicles with an engine smaller than 1.6 liters. That crippled demand for Ford's sedans, a trend that finally reversed in April. Sales of the Escort, new Focus, new Mondeo (Fusion), and Taurus combined for a 10% increase in sales compared to the prior year.

Not to be outdone, Ford's SUVs still checked in with a healthy sales increase. Sales of the EcoSport, Kuga (Escape), Edge, Everest, and Explorer jumped 4% last month, compared to the prior year. The standout of that group was the Edge, which posted an impressive 19% sales gain over the prior year. Sales of Ford's Kuga moved 9% higher, good enough to be its best month of the year.

Arguably the biggest story for Detroit's second-largest automaker has been Lincoln. While Lincoln has finally started gaining traction again in America over the past three years, it's started off well in China and continues to gain sales momentum. Lincoln sales soared 95% in April to just over 4,500 units. That brings its year-to-date total to more than 16,200, which is a strong 108% gain over the same time period last year.

Ford has made substantial sales progress over the past five years in China, but due to entering the market late, it's clearly still trailing its archrival, General Motors (NYSE:GM). GM's sales in China were down 2% in April compared to the prior year, but recorded nearly three times the amount of Ford sales, at 272,770 units. In fact, GM's Buick brand nearly outsold Ford by itself, recording more than 84,100 units sold in the country last month. And its Cadillac brand also remains a couple of steps ahead of Lincoln, recording its 14th consecutive month of double-digit sales gains with an April sales total of nearly 14,000 units.

All in all, while Ford has much work to do in terms of generating more sales and improving margins in China, investors can at least be optimistic that its first-quarter sales slump is over with.