Shares of Teekay Offshore Partners (NYSE:TOO) plunged on Thursday, down more than 15% at 3:15 p.m. EDT. Driving the sell-off was the company's first-quarter report, during which earnings fell versus last year because of a contract dispute with Brazilian oil giant Petrobras (NYSE:PBR). That sell-off was a key contributor to its parent company's double-digit plunge today.

Teekay Offshore Partners generated $141.3 million in total cash flow from vessel operations (CFVO) during the quarter. While that was a 4.8% improvement from last quarter, CFVO is down 14.9% from last year's first quarter. Meanwhile, distributable cash flow also increased from last quarter, up 41.6% to $30.6 million. However, that metric is still down more than 50% from the year-ago period. 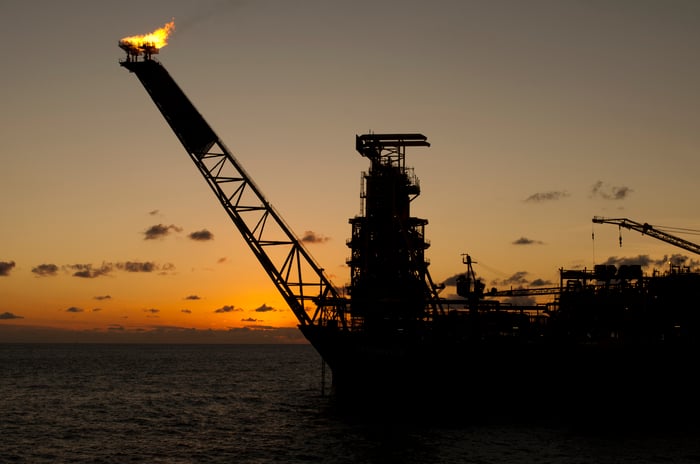 Driving the sequential increase was higher cash flows from the company's shuttle tanker and floating production, storage, and offloading fleets. That performance made the company's results come in better than its expectations.

But that's where the good news ended. CEO Ingvild Sæther stated in the press release:

Our results for the quarter continued to be impacted by the non-payment of charter hire on the Arendal Spirit UMS. We were recently notified by the charterer, Petrobras, of its termination of the charter contract on this unit. We are disputing the termination and are reviewing our legal options, while at the same time actively marketing the unit for alternative employment.

The company expects to record a $12 million increase in vessel operating expenses next quarter relating to this ship. As a result of this and other items, cash flow will fall sharply next quarter.

Teekay Offshore Partners has run into its share of problems over the past year because of the oil market's downturn. Not only has it had more than one customer end a contract earlier than anticipated, but one of its growth projects has also experienced delays and cost overruns that will probably push its timeline into early 2018. This string of problems has rattled investors, who are losing their patience with regard to the company's ability to turn things around.