Please ensure Javascript is enabled for purposes of website accessibility
Log In Help Join The Motley Fool
Free Article Join Over 1 Million Premium Members And Get More In-Depth Stock Guidance and Research
By Todd Campbell - May 22, 2017 at 10:02AM

A possible entry into mail-order pharmacy could significantly disrupt this massive market.

Patients may be able to get their prescriptions filled by Amazon (AMZN 3.66%) someday, and if so, it could significantly disrupt the retail pharmacy industry. According to reports, Amazon's been considering a push into pharmacy for a while, and they're finally getting serious about it.

According to CNBC, Amazon's creating an internal pharmacy benefit manager to serve its 128,000 employees, and it's developing a strategy that could allow it to provide prescription drug fulfillment to its customers nationwide. 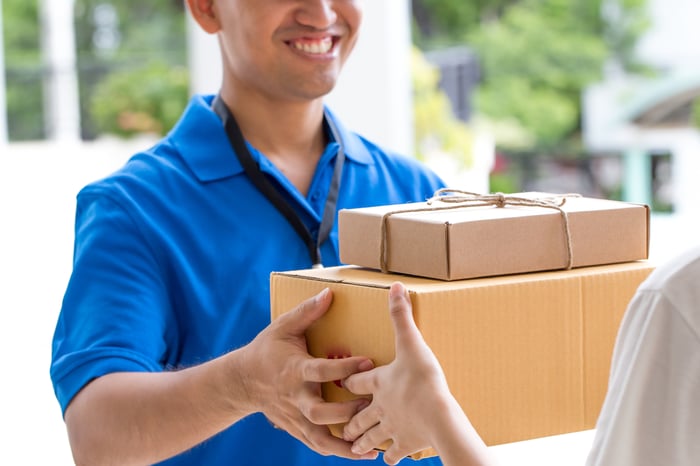 The project is reportedly being spearheaded by Mark Lyons, a former director at Premara Blue Cross who joined Amazon as senior manager of pharmacy benefits in April, according to his Linkedin profile.

CNBC says Amazon is in the process of hiring others to help it evaluate the potential associated with disrupting the retail pharmacy market, but a final decision to enter hasn't been made yet.

The market for prescription drug fulfillment is ripe for disruption. Americans spend $379 billion (yes, billion) on prescription medicine every year, according to the Kaiser Family Foundation, and lately, there's been a growing demand to rein in what many view to be runaway prescription drug prices.

Currently, the market is dominated by retail pharmacy chains, including CVS Health (CVS 0.26%) and Walgreens Boots Alliance (WBA 1.56%), grocers, mass merchants, and independent pharmacies. Patients may also get their prescriptions filled by mail-order pharmacies operated by pharmacy benefit managers that have been contracted by insurers and self-insured employers.

Pharmacy benefit managers, including Express Scripts (ESRX), pool together demand from health insurers and self-insured employers to negotiate prices with drugmakers to lower costs. They also manage programs for them to boost the use of generic drugs and patient adherence to medicine to reduce the likelihood of disease progression.

While big retailers and pharmacy benefit managers have some leverage to negotiate lower prices and eliminate some of the overlapping costs associated with managing drug distribution, inventory, and patient management, a player like Amazon could conceivably do even better.

Clearly, Amazon's got the purchasing and inventory management know-how to make a program like this work, and with same-day shipping in many markets, it could win away a lot of business from traditional mail order pharmacies.

Amazon's customers already use Amazon to subscribe to products that show up on a schedule, and it wouldn't seem to be a deal-breaker to develop a system that would make it easy for healthcare providers to send in prescriptions for patients, either. Amazon also has a ton of experience in data management and analysis that could provide it with an edge.

In Japan, Amazon already appears to be testing this concept out. In April, Amazon Japan rolled out a service to Prime members offering same-day delivery of pharmacy items, such as cosmetics and medicine. For fulfillment, it's teamed up with the Japanese pharmacy chains Cocokara Fine Inc. and Matsumotokiyoshi Holdings.

Amazon's also made category No. 1 drugs available on its Japanese website, allowing consumers to purchase prescription medicine after providing a medical history and having their order approved by a pharmacist.

Undeniably, there are inefficiencies in the drug supply chain that Amazon could erase to achieve cost savings, but Amazon's foray into pharmacy might work best if it wins buy-in from insurers and employers, many of which are locked into multiyear contracts with their existing pharmacy benefit managers.

Conceivably, Amazon could buy its way into this market, but building from the ground up would give it the best chance of creating a truly disruptive low-cost operation. If Amazon does go the build-it-from-scratch route, then companies including Express Scripts could have to cut already thin margins even thinner to maintain market share. That wouldn't be profit-friendly for them (or their investors).

Traditional retailers could stand to lose out most, however, if Amazon enters this market. They rely heavily on same-day service to drive foot traffic and impulse purchases. As Amazon same-day delivery becomes more common, they could be big losers.