AMD's Vega GPUs mark its return to the high end, but it needs to do better than last time.

Advanced Micro Devices (AMD -0.21%) hasn't launched a truly high-end graphics card since the Fury X nearly two years ago. The Fury X was the first graphics card to include high-bandwidth memory, which increased the rate at which the GPU could access data. This is particularly important for gaming at 4K resolutions.

The Fury X mostly closed the performance gap with NVIDIA's (NVDA 1.71%) high-end graphics cards, but that's all it did. Instead of leapfrogging NVIDIA, as AMD had done in the past, the best it could do was play catch-up with the market leader. NVIDIA's high-end dominance remained intact.

AMD has focused on the mainstream portion of the graphics card market since then, launching its Polaris GPUs about a year ago. These proved a bit more disruptive, as AMD priced the cards aggressively. But NVIDIA quickly countered with new mainstream graphics cards of its own, including the GTX 1060. AMD managed to boost its GPU unit market share to 28% in 2016, up from just 20% in 2015, thanks to Polaris. But that's still well below the roughly 40% share the company enjoyed prior to 2014.

With the Fury X nearly two years old, AMD has essentially no presence in the high-end GPU market. That will change with Vega. The first Vega card, the Frontier Edition, will be aimed at professional applications, not gaming, and will be available in late June. Gaming variants of Vega will launch later this year, but AMD has been coy about release dates.

AMD's computing and graphics segment is still not profitable, even with Polaris producing market-share gains. But Vega has the potential to finally return AMD's core business to profitability.

An unfortunate truth about AMD's mainstream-focused strategy is that mainstream graphics cards aren't all that profitable. According the company's internal estimates, more than 85% of all graphics cards sold are priced lower than $200. In terms of winning unit market share, going after the mainstream portion of the market makes sense.

But just one-third of the total gross margin dollars in the graphics card market is spread across those mainstream units. The other two-thirds is generated by the high end of the market, which accounts for less than 15% of the total unit volume. With NVIDIA dominating the high end over the past few years, it's no wonder that its bottom line has soared. 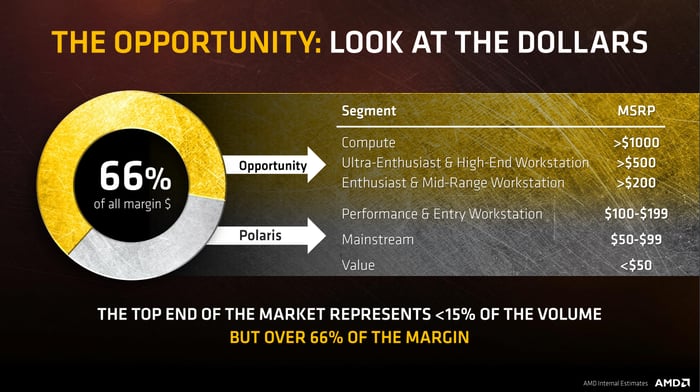 With AMD starting from nearly zero in the high-end graphics card market, any market-share gains will boost the bottom line. The stock has nearly tripled over the past year, so investors have lofty expectations. Vega can be a success and still fall short of those expectations. While Vega is all upside for AMD, investors need it to be home run.

One major risk: The longer AMD takes to launch the gaming version of Vega, the less time it will have before NVIDIA begins launching its next-gen Volta gaming products. NVIDIA has already announced the Tesla V100, a data center GPU powered by Volta, and there are some rumors suggesting that Volta-based gaming cards could be coming this year. If Vega launches late enough to allow Volta to steal its thunder, AMD may continue to have little presence in the lucrative high end of the market.

Whether Vega will be good enough compared to NVIDIA's current high-end products to win AMD a meaningful amount of high-end market share remains to be seen. AMD's last attempt at breaching the high end fell short, leaving NVIDIA with the lion's share of the most profitable part of the graphics card market. If Vega doesn't live up to the hype, investors betting on an AMD turnaround will be in for a rude awakening.