The stock market has done reasonably well so far in 2017, with the S&P 500 (SNPINDEX:^GSPC) enjoying total returns of about 7% and remaining close to all-time record levels. But some stocks have done a lot better than the overall market, and shareholders in those companies have made a killing. In particular, Universal Display (NASDAQ:OLED), Weight Watchers International (NASDAQ:WW), and Exact Sciences (NASDAQ:EXAS) have all doubled in the first five months of 2017, and some investors wonder if they have even further to climb in the near future. 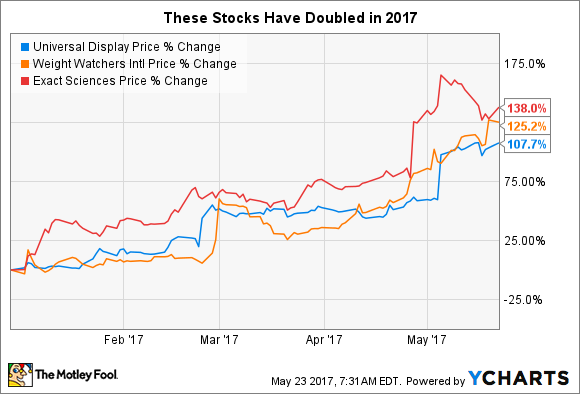 Universal Display is anything but flat

Universal Display has been a leading company in producing organic light emitting diodes for flat-panel displays, including both large formats like television sets and smaller footprints like mobile devices. The company has been working to expand its production capacity recently, and many investors have hoped that big orders for OLED displays would eventually come.

Most of the gains so far in 2017 have come from reports that Apple (NASDAQ:AAPL) is considering using OLED screens in its future iPhone products, and that could result in a huge boost in demand for the displays from Universal Display. So far, Universal Display has been a bit vague about the prospects for an OLED iPhone, but that's not unusual for a company seeking to do business with the mobile-device pioneer. With rising guidance for revenue and expectations for increased production, shareholders are betting that the iPhone effect will boost Universal Display's fundamentals going forward, and that's enough to justify a big move in the shares this year.

Weight Watchers International has been a popular stock recently, although it has also been a volatile one. In 2015, the stock rose more than fivefold in just a matter of months, and coming into 2017, the weight-loss specialist had seen plenty of ups and downs as investors weighed the impact of celebrity Oprah Winfrey's presence as a major shareholder and participant in Weight Watchers' prospects.

Yet this year, Weight Watchers has earned its upward moves through strong fundamental performance. In March, the company reported a 10% rise in memberships, with solid international growth pointing to opportunities for geographical expansion. May saw another strong quarter, with Weight Watchers reversing a loss in the year-earlier period and hiring former Home Shopping Network CEO Mindy Grossman to take over as CEO in July. Rising guidance also helped push shares higher, and Weight Watchers appears to have the business success to justify this year's stock price rise.

Exact Sciences has a winner

Finally, Exact Sciences has posted the biggest return of these three stocks, with gains of 138% so far in 2017. The company has found a hit with its Cologuard test for colon cancer, offering patients a chance to have a diagnostic test run for the disease without the discomfort and full cost of a colonoscopy. Demand for Cologuard has been extremely strong, with 100,000 tests done in the first quarter representing 150% growth in just the past year. Insurance reimbursement availability for the test has increased, and that has spurred more customers to consider Cologuard.

One problem that some investors have with Exact Sciences is that it hasn't yet been able to turn the explosive sales growth in Cologuard into bottom-line profits. Indeed, even the big rise in test sales was only enough to cut its loss in the first quarter by a little more than 25%. Few expect Exact Sciences to be profitable in 2017 despite calls for continued increases in test sales, and that explains why the stock has actually given back some ground since hitting higher levels in early May.

Stocks don't double in such a short period of time that often, and there's almost always a catalyst to explain the sudden move. From a fundamental perspective, Weight Watchers has arguably seen the most dramatic turnaround in its financials, but both Universal Display and Exact Sciences have potential that investors are banking on seeing in the near future.