In late March, FMC Corp. (NYSE:FMC) made a big, bold move that was widely applauded by Mr. Market. The company sent its health and nutrition segment and $1.2 billion to DuPont in exchange for a big chunk of its agricultural solutions assets. It immediately disposed of a business that had struggled to grow in recent years and diverted management bandwidth away from more promising long-term opportunities. And, of course, the move should allow DuPont and Dow Chemical an easier path to approval for their megamerger.

The transaction catapulted the company overnight to become the fifth-largest ag tech player on the planet (admittedly, there's a lot of distance between the top three and everyone else). It also condensed the number of operating business segments from three to two. Going forward, agricultural products will supply the bulk of revenue and cash flow, while the second and much smaller segment -- lithium -- offers the largest growth opportunities. The new dynamic is the real reason to love FMC Corp. stock. 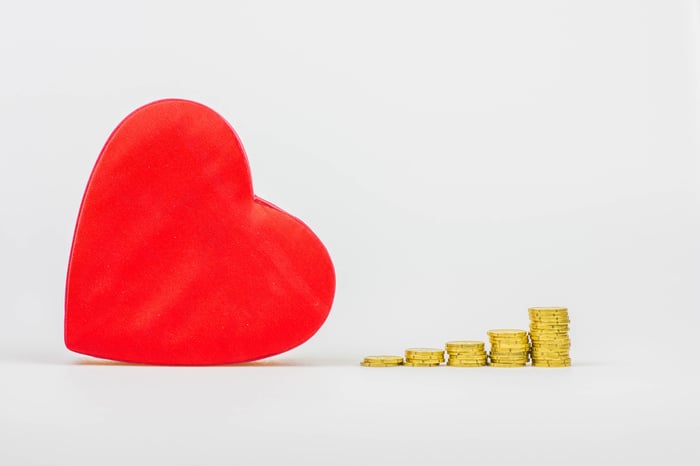 FMC Corp. has struggled to grow revenue in recent years. That may be an understatement. From 2014 to 2016, the top line reported $3.26 billion, $3.28 billion, and $3.28 billion, respectively. That was mostly due to growth in other areas of the business being offset by declining sales of the former health and nutrition segment, which posted sales of $828 million, $785 million, and $744 million in the last three years, respectively.

Stagnant revenue growth was one big reason investors were immediately optimistic about the recent acquisition of most of DuPont's crop protection business. The agricultural solutions segment is now projected to generate annual sales of $3.8 billion. The acquired assets alone -- including three of the world's best-selling insecticide products -- are expected to generate revenue and EBITDA of $1.5 billion and $475 million, respectively, in 2017.

In addition to the immediate injection of growth, the acquisition included leading research and development assets and capabilities, including a massive insecticide discovery library and robust pipeline of potential future products. So, the new products more than offset revenue lost from the divested health and nutrition segment, while offering even better growth prospects in the coming years. It was a clear win-win for investors. 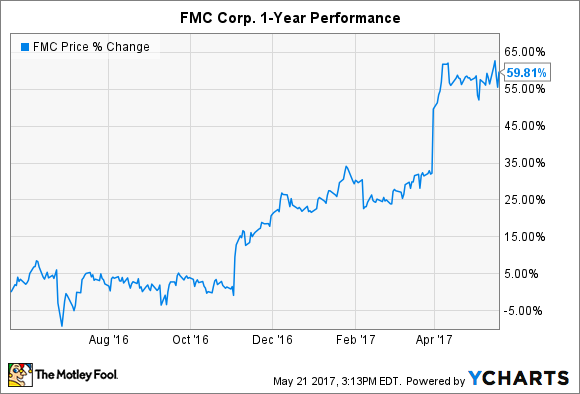 Importantly, the agricultural solutions segment will provide ample cash flow and stability for FMC Corp. to invest in and develop its lithium segment, which presents the most promising source of growth for investors. There are two driving forces behind the growth potential: favorable selling prices and production expansion.

Favorable pricing of lithium products made a huge impact last year. While lithium segment revenue grew just 11% from 2015 to 2016, operating income more than tripled from $23 million to $70 million in the same period. As a result, the lithium segment contributed 11% of total operating income last year despite accounting for just 8% of total revenue.

It's important to note that the fine print shows that favorable pricing offset impacts from lower sales volumes. That's due to a recent trend among the energy storage industry -- now the single largest consumer of lithium. While FMC Corp. and other lithium manufacturers sell less refined upstream products such as lithium carbonate, it's easier for battery manufacturers to start with more refined downstream products such as lithium hydroxide. As a result, demand for the former has waned (comparatively speaking), while the appetite for the latter has soared. Lithium manufacturers didn't have enough production capacity of refined products to keep up with demand in 2016, which resulted in soaring selling prices.

Other leading lithium producers are doing the same, but it still may not be enough to meet market demand in the long run. Consider that in 2016 the top 13 battery production facilities had an output of 29 GWh of energy storage products. By 2020, that is expected to climb to over 171 GWh. The amazing growth in energy storage markets hints that FMC Corp. has an amazing growth opportunity right around the corner, both in terms of revenue and profit expansion.

Today, FMC Corp. is primarily an agricultural solutions company with a lithium hobby. The smaller segment will likely contribute less than 10% of total revenue in 2017. However, the near- and long-term growth potential in lithium, especially more refined products, is tremendous. That certainly isn't lost on the company. In fact, in its most recent quarterly report, management disclosed that the ultimate goal is to spin off the lithium segment as a separate publicly traded company. That would create the first pure-play lithium stock for investors, and perhaps at the ground floor of a booming lithium market. There's no telling when that would occur or what might happen to change management's mind, but investors today can enjoy the growth provided by the soon-to-be growing segment and be first in line to own shares of any potential spinoff. What's not to like about that?