Anyone who reads articles about finance and investing has a right to be skeptical of what they read. Who's to say that the writer doesn't have an ulterior motive? Are they trying to get you do do something that will directly benefit them? There's also the problem of financial content providers offering up advice that they themselves wouldn't take.

So in the spirit of full disclosure -- and of eating one's own cooking -- I want to share with you the three biggest stock holdings in my portfolio: Apple (NASDAQ:AAPL), American Tower (NYSE:AMT), and Enterprise Products Partners (NYSE:EPD). Here's a brief explanation of why I continue to hold onto these companies. 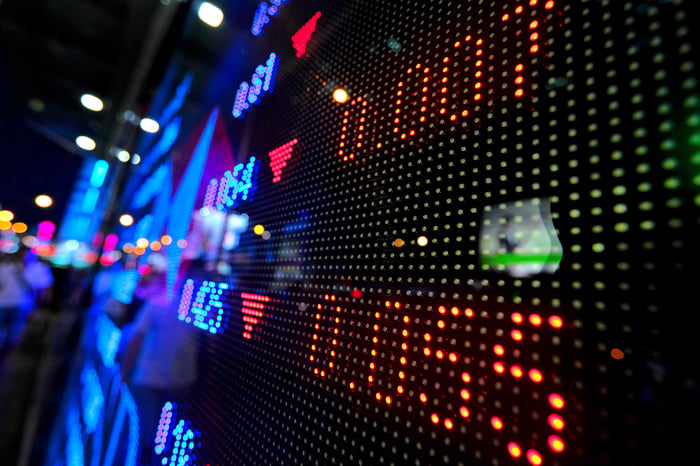 A non-tech approach to Apple

I'll be the first to admit that I'm not a techie. I'm usually the person who says "Why the heck would anyone want that," when a new device, app or service appears, only to discover I was completely wrong as it takes off. So I can't speak with any authority on the tech behind Apple's products. The reasons that it's one of my three largest holdings have nothing to do with it being a tech company, though.

Two factors make Apple appealing as an investment to me: pricing power, and shareholder-friendly buybacks and dividends. The one thing that even I can understand about technology is that it rapidly becomes commoditized, which typically makes competition in products such as smartphones and laptops a race to the bottom, where margins go to die. Apple has separated itself from its rivals in that regard, thanks in large part to the brand it has nurtured for all these years.

When the first iPhone was launched in 2007, the initial retail price was $499, which at the time seemed absurd to me. Yes, I even remember saying at the time, "My Nokia brick phone does everything I need already." Despite its high price, the iPhone sold like gangbusters, to the point that today it owns a 30% share of the U.S. smartphone market, plus significant market share overseas. Furthermore, rumors floating around suggest that the new iPhone 8 will start at $999. Sure, the tech in the iPhone 8 is far beyond what that first model offered, but what is incredible is that there's still such huge demand for the company's products at those premium prices when there are so many lower-cost options out there.

That kind of pricing power translates to almost unfathomable amounts of free cash flow -- so much so that there is no way Apple can spend it all on developing new products. So instead, it's spending tens of billions of dollars on share buybacks and paying an increasing dividend. While some may periodically criticize the company for the timing of those stock repurchases, it's hard to argue against the long-term impact of reducing its share count.

Perhaps this isn't the most insightful or eloquent investment thesis for Apple, but it's mine, and I feel comfortable riding it for several more years.

An unsophisticated investment approach to data

American Tower is another company leveraged to the world of technology, but it does so in the least technological way possible. It's a real estate investment trust that owns cellular network towers and leases space on them to wireless service providers. The most influential factor in why it is one of my largest holdings is it also happens to be one of my first stock holdings -- along with Apple, not surprisingly. The investment thesis I developed around American Tower is based on two things: the long-term trend toward greater data usage, and the long-term growth of its dividend payment.

Again, I'm not a tech guy, but it doesn't take a tech genius to look around and see everyone's faces buried in smartphones and realize it takes an impressive amount of infrastructure to support that much data usage. And when you look at the numbers, they're staggering. Total data traffic in the U.S. alone in 2016 was 13.75 exabytes -- or 13.75 trillion megabytes. That's 3.3 times more than total data used in 2014. Moreover, American Tower estimates that U.S. data traffic will increase to 34.8 exabytes by 2020 as wireless carriers start to roll out 5G service.

For wireless carriers, increasing data usage means they need to deploy more equipment to support their respective networks, and that hardware gets mounted on towers owned by companies like American Tower. And by leasing space on each tower to multiple tenants, those companies drastically improve their return on investment.

And naturally, the rising data use trend isn't just happening in the U.S. One of the most intriguing opportunities for American Tower is in the developing world, where wired connections are fewer and farther between. American Tower is investing heavily overseas in places where wireless penetration is high, but broadband penetration is still developing. In markets like that, the economics of cellphone towers are spectacular. 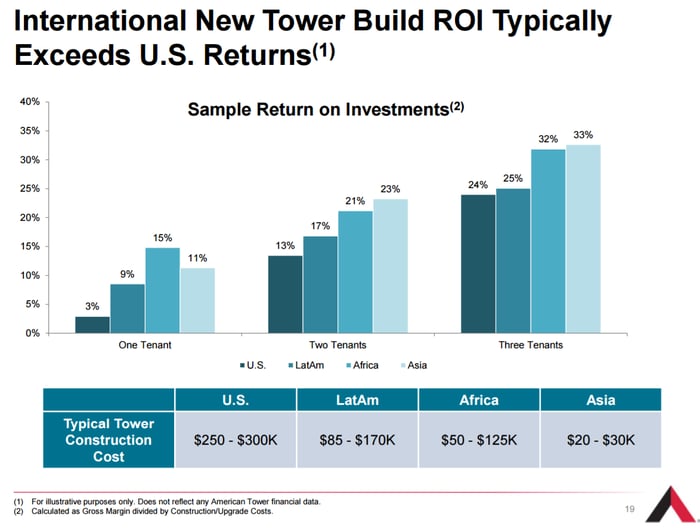 All that aside, here's what puts American Tower over the top for me as an investment: It's a business with high levels of recurring revenue and few maintenance capital obligations. Those factors make it ideally suited to generating free cash flow that can be returned to investors. While American Tower's 1.93% dividend won't wow anyone, management has grown that payout by 181% over the past five years.

American Tower is probably the most unsexy way to invest in the sexy trend of increasing data use around the world, but the company has proven thus far to be a great long-term investment, and it's one I plan to hold onto for a long time.

If I had to pick one energy investment, this is it

Of all the companies in the oil and gas sector, I can't think of one I would want to own over the long haul more than Enterprise Products Partners. As a midstream operator that focuses on the transportation, logistics, and processing of hydrocarbons, it has the benefit of being largely insulated from the ups and downs of oil and gas prices. As it stands today, more than 85% of the company's gross profits come from fixed-fee contracts with volume commitments. This type of contract structure ensures Enterprise has a relatively steady revenue stream that supports the sustained growth of its network, and allows it to pay a generous distribution to its shareholders.

There are a lot of similar companies in this business, and many of them share many qualities with Enterprise, like those fixed-fee contracts and handsome payouts. What separates Enterprise from the rest, though, is the way in which management handles the business.

One element where Enterprise's excellence first shows up is in its corporate structure. It doesn't have multiple subsidiaries below it, and the parent organization above it doesn't charge management fees (known in this sector as incentive distribution rights). Instead, that parent entity -- a holding company -- owns a significant portion of stock, but its holdings are of the same share class any retail investor can buy today. That means management's goals are more directly aligned with the interests of the other investors than is common among other companies in this business. This simpler structure also means Enterprise enjoys a lower cost of capital than rivals that carry the burden of incentive distribution rights. Also worth mentioning is that's it's just easier to understand Enterprise's financials because you don't have to follow the money through many corporate layers.

The other thing that sets Enterprise's management apart is they have been great stewards of shareholder capital over the years. They have struck a great balance of paying a high-yield dividend, giving themselves plenty of room to grow that dividend every quarter, and retaining enough cash to grow the business without having to rely exclusively on external capital sources like debt and equity. These traits don't lend themselves to the production of intermittent blowout quarters, but they do translate to steady returns that have, over the years, obliterated the S&P 500 on a total return basis. 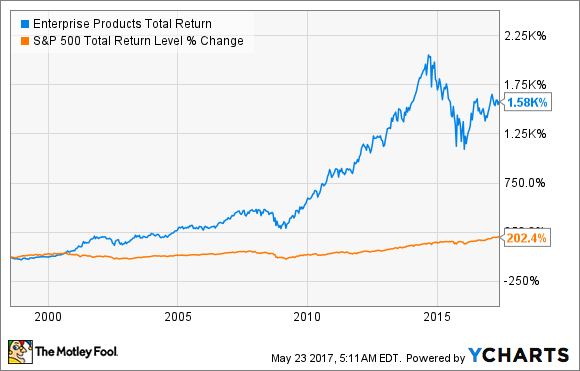 I don't know how much longer it will be before the U.S. and other developed countries start to shift away from fossil fuels in a meaningful way, but my guess is that it's still quite a few years away. As long as oil and gas provide the lion's share of our energy, then the company I want to own more than any other in this industry is Enterprise Products Partners.