High-performance athletic clothing brand Under Armour (NYSE:UA) (NYSE:UAA) reported slightly better earnings than expected for the first quarter. As covered in my earnings preview article, investors were interested in the results from its large North American and wholesale segments. Management discussed these topics along with providing insight into the new relationship with Kohl's. Missing was insight into retail traffic, specific results on what's happening in North America, and results from company's e-commerce efforts. All the while, Under Armour's largest competitor, Nike, and its biggest partner, Dick's Sporting Goods, are openly discussing e-commerce trends and results.

Let's take a closer look at Under Armour's perspective on the quarter, what management didn't say, and who's talking about e-commerce in the sports apparel retail industry. 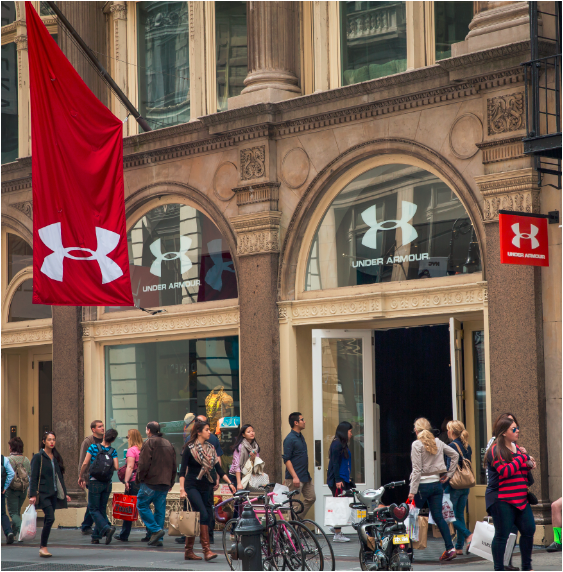 The numbers for North American wholesale

Under Armour's results are significantly weighted by the North American geography and its wholesale segment. Here are the company's growth numbers in these critical portions of the business.

As you can see from the table above, these critical business segments are seeing decelerating growth, and that has a significant impact on the overall top line. In my preview article, I had indicated that flat to 5% growth in these parts of the business would indicate stability. While wholesale hit the mark, North America came up a little short. Management explained that the negative North American comp was due to the promotional environment that continued into this year.

Kevin Plank, Under Armour's CEO, characterized first-quarter results as "stable and staying healthy even as segments of our wholesale business in North America fight through uneven terrain." Because of this "uneven terrain," I was looking for some context for the North American retail environment and was hoping management would comment on traffic at Dick's, North American retail stores in general, or early indications of successes with the Kohl's partnership. Turns out, I got one out of three.

While no specifics were provided on consumer traffic, Plank did mention that the Kohl's partnership was going well and "has exceeded our expectations to date." David Bergman, chief financial officer, went on to say that management knew Kohl's sales wouldn't "be enough to offset prior-year bankruptcies."

While Kohl's progress was not quantified, management did discuss its strategy in relation to the company's retail partners. Kevin Plank stated that the company is sticking with its current "amazing" partners and won't be adding more.

Plank goes on to say that the goal is to make the company's existing partners better. With this strategic view combined with the comments from the last call on the retail space, Under Armour reinforced that it wants to optimize the partners its has, and keep its commitments to its brick-and-mortar partners where they are today -- and no bigger.

Investors were disappointed that Under Armour management didn't discuss how e-commerce is affecting the company. In contrast, Nike and Dick's management teams are talking.

Even though Plank spent a considerable amount of time in last quarter's call explaining the benefits of investing in digital and e-commerce, all investors heard this quarter was him describing North America and retail in general as a "rapidly changing environment." No details were provided on progress on e-commerce results other than that its direct-to-consumer revenue growth was "balanced across all three concepts, factory and brand houses and e-commerce."

Nike's management does agree that there's a more promotional environment in North American retail, but they squarely named the cause as the consumer shifting to digital purchases. Mark Parker, Nike's CEO, discussed the broad impacts of this shift.

[The digital shopping experience] ... and other factors have shifted consumer patterns, especially in North America, impacting traffic, the economics of brick-and-mortar retail and is driving a more promotional environment in the near term.

In response, Nike has doubled down on its digital efforts (whether Nike or partners) to drive business in "direct service of the customer."

Dick's Sporting Goods is also adapting to the changing state of retail by investing in its e-commerce business. As a domestic company with 676 brick-and-mortar stores, the company has been hyper-focused on what had caused its competitors to fall into bankruptcy.

The table below summarizes the e-commerce results for these three companies from the most recent earnings reports.

In the fourth-quarter 2016 earnings call, Kevin Plank boldly claimed, "as DTC [direct to consumer] relates to e-commerce, I don't know if anyone can imagine that they can put enough money toward their digital businesses today." It's clear that management understands the criticality of e-commerce to Under Armour's long-term success, but the company has come up short in showing investors how it's doing.