When most folks think of "action cameras," GoPro (NASDAQ:GPRO) is generally the first name that comes to mind. As CEO Nicholas Woodman noted in GoPro's first-quarter earnings release, its HERO5 Black and assorted variations of the flagship product occupied the top three spots in the "digital image category." That's the good news.

Unfortunately, there are a few reasons GoPro shareholders have something to worry about, despite its dominant position in the consumer digital camera market. As one analyst put it, "the overall decline in stand-alone imaging products (camcorders / cameras) and increased saturation in mature markets like the U.S." will hamper GoPro's topline- growth for at least the next couple of years. And market saturation isn't the only hurdle GoPro faces. 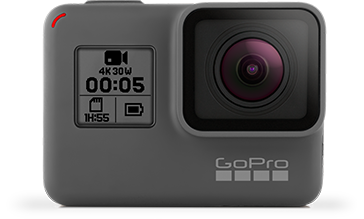 A road full of potholes

One of the reasons industry pundits are voicing concerns about market saturation is fairly straightforward: Let's face it, how many mountain climbers, extreme skiers, and scuba divers, are there? To GoPro's credit, it did report a 19% increase in revenue last quarter, to $218.6 million, and its much-maligned Karma drone outfitted with a HERO5 camera was the second best-selling drone priced over $1,000.

GoPro also noted that it added about $92 million to its balance sheet, improving its liquidity position. But like much of GoPro's "positives" from last quarter, there's a caveat. GoPro's balance sheet got a boost because it increased its debt load by $175 million following a convertible debt offering, not because of strong free cash flow, which would have actually been something to boast about.

Some bullish investors point to GoPro's Karma drone as a significant growth opportunity, one that would be welcome given the aforementioned saturation in the digital camera market. One recent study suggests drones will become a $100 billion market over the next three years. Good news for GoPro, right?

While a portion of the drone market opportunity is expected to come from the consumer market -- about $17 billion -- the vast majority will come from commercial uses. Military applications, not to mention everything from construction to farming, are where the opportunities lie, which is why big hitters including Intel (NASDAQ:INTC) have thrown their drone hats into the ring.

Intel's Falcon 8+ drone is specifically designed and marketed as "an advanced, Unmanned Aerial Vehicle (UAV) designed for professional use," which makes perfect sense given the vast majority of the drone marketplace is commercial-related. GoPro may be content focusing on drone-using consumers, but that's not where the real growth lies.

On the bright side (sort of)

In light of the expected slowing in GoPro's niche markets, Woodman has undertaken a cost-cutting initiative that's already paying dividends: Sort of. Operating expenses were down "over $50 million" quarter over quarter to begin the fiscal year. However, without the benefit of last year's first-quarter $14.3 million tax benefit, GoPro's net loss still increased year over year to $111.2 million compared to 2016's $107.5 million.

Continued cost-shaving efforts and the successful launch of the new virtual reality (VR) Fusion camera expected to roll out this summer could move GoPro closer to its goal of returning to non-GAAP (excluding one-time items) profitability by the end of the year, which would be a step in the right direction.

But let's face it, GoPro's primary revenue drivers -- action cameras and consumer drones -- simply don't offer much upside, which is by far the biggest reason shareholders have something to worry about. Toss in tech behemoths like Intel that have definitive plans to dominate the drone market, at least on the commercial side of things, where it matters, and where does that leave GoPro?

The answer to that question is, right where GoPro is and will likely stay for years to come: a star among a niche consumer market with very few growth prospects.

Why GoPro, Inc. Shareholders Have Something to Worry About @themotleyfool #stocks $GPRO $INTC Next Article
Current