Please ensure Javascript is enabled for purposes of website accessibility
Log In Help Join The Motley Fool
Free Article Join Over 1 Million Premium Members And Get More In-Depth Stock Guidance and Research
By Steve Symington – May 26, 2017 at 11:27AM

Shares of the footwear specialist jumped after a strong quarterly report.

Shares of Deckers Outdoor Corp. (DECK -0.17%) were up 16.7% as of 10:44 a.m. EDT after the footwear designer and distributor announced a surprise profit and better-than-expected revenue for its fiscal fourth quarter of 2017.

Quarterly revenue declined 2.4% year over year (or down 1.5% at constant currency) to $369.5 million, which translated to roughly flat adjusted earnings of $0.11 per share. Analysts, on average, were expecting an adjusted net loss of $0.06 per share on lower revenue of $357.6 million. 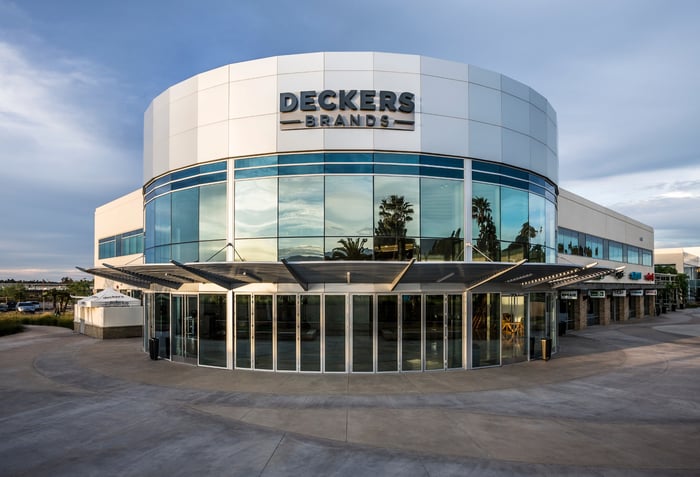 Deckers also provided an update on its cost-savings plan, telling investors that $150 million in cumulative savings coming from cost of sales improvements and reductions in sales, general, and administrative expenses should drive an operating profit improvement of $100 million by the end of fiscal 2020.

"I am proud of the work the team has accomplished, and I believe we have laid a solid foundation to execute on our savings plan," added Deckers CEO Dave Powers. "I am confident that these improvements will drive a significant increase in shareholder value over the long-term."

Finally, for the full fiscal year of 2018, Decker's expects revenue to be in the range of down 2% to flat over fiscal 2017, which should translate to adjusted earnings per diluted share of $3.95 to $4.15. By contrast, Wall Street was looking for lower fiscal 2018 adjusted earnings of $3.79 per share on a slight 0.2% decline in revenue.

This was a solid quarter from Deckers, despite its modest growth operating in a difficult market. As the company continues to drive improvements in profitability, it's no surprise to see Deckers stock up big today.