For at least two years now, the U.S. Navy has been trying to pick a new missile: long-range, affordably priced, and key to the Navy's new doctrine of "distributed lethality." The Naval Air Systems Command (NAVAIR) is choosing among three separate systems to provide its Littoral Combat Ships with an over-the-horizon (OTH) ability to strike targets at long range.

For at least two years now, Boeing (NYSE:BA) has been developing a new missile to meet the Navy's needs -- a "Block II Plus Harpoon" missile. Carrying a 300-pound warhead roughly 60% the size of a standard Harpoon, and sporting a brand-new engine, the new missile boasts an advertised range of 134 nautical miles. That's twice the range of Boeing's preceding version of Harpoon, and a longer range than offered by a competing Naval Strike Missile (NSM) from Raytheon (NYSE:RTN), although it pales in comparison to Lockheed Martin's (NYSE:LMT) Long-Range Anti-Ship Missile (LRASM), which also boasts a bigger warhead. 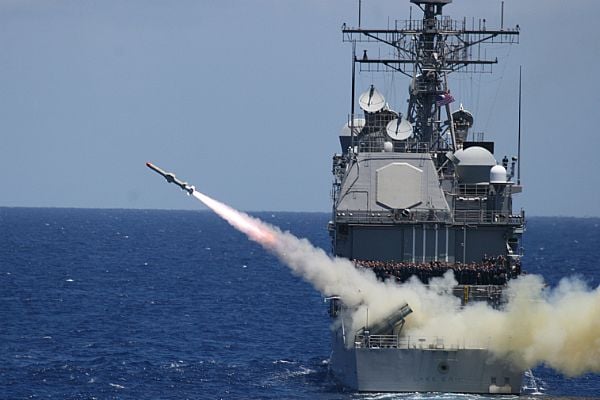 Boeing's Harpoon missile has set sail aboard Navy warships for decades -- but for how much longer? Image source: NAVAIR.

But here's the most serious impediment to Boeing winning the NAVAIR contract: Boeing has decided not to bid on it at all.

As reported earlier this month on DefenseNews.com, Boeing has pulled its bid from the competition, citing "Navy changes" to the requirements for its new missile. Says Boeing, "every iteration of the [Navy's request for proposals cut] the top-level requirements" for the new missile. In particular, Boeing said the Navy is no longer requiring that contractors offer it an "all-weather" missile, nor one that is "net-enabled" such that it could be guided to target by units other than the one that fired it. This, says Boeing, means that in any review of its bid, the company would not receive "credit to the full capabilities of the" new Harpoon.

"We've taken a hard look at that," lamented Boeing, and decided in the end "that at this point it doesn't make sense for the Boeing Company to bid on this."

In other words, the Harpoon that Boeing designed for one set of Navy requirements now exceeds the revised requirements to such an extent that other bidders would likely undercut it on price by offering less capable weapons. If that's the case, Boeing could lose this game before it even begins -- so Boeing has decided not to play.

That's a logical reaction, but it's still bad news for Boeing -- and maybe even worse news than many investors realize. If Boeing had succeeded in winning the OTH missile contract, the company could count on revenue from outfitting as many as 40 planned Littoral Combat Ships with missiles. (How much revenue will depend on how many OTH missiles can eventually be crammed onto each ship -- which currently aren't equipped to carry them. But it would probably run to the tens or hundreds of millions.)

More important, though, in winning OTH, Boeing would very likely have been hired to upgrade existing Harpoon stockpiles (7,500 Harpoons have been sold around the world over the past four decades) to the new Harpoon configuration -- a project that could yield billions of dollars of new revenue. While these prospects haven't disappeared entirely, and Boeing says it still expects to sell surface-to-surface, as well as submarine-launched and air-launched variants of its newest Harpoon, the added boost to the new missile's popularity that an OTH win would have given Boeing will be sorely missed.

What it means to Raytheon and Lockheed Martin

Conversely, Boeing's exit from the OTH competition is very good news for its former rivals, Raytheon (and its Norwegian partner, Kongsberg) and Lockheed Martin. Here's why: Boeing may think that the Navy's changing requirements turned Harpoon into more missile than the Navy wanted to buy, and might have hurt the missile's ability to compete on price. But in fact, the numbers I'm seeing suggest that Harpoon would have posed a very real threat to both Raytheon's and Lockheed's offerings.

Consider: Boeing estimated the cost of its improved Harpoon at $1.2 million, or roughly equivalent to a current-model Harpoon. For comparison, the U.S. Government Accountability Office estimates LRASM's cost at about $3 million per unit -- significantly more expensive than Harpoon. At the same time, other sources suggest that Raytheon's NSM would cost about half of LRASM's cost, implying a price tag of perhaps $1.5 million.

Conclusion: Despite offering capabilities superior to what the Navy is now looking for, it appears that Boeing's Harpoon would still have cost less than offerings from Lockheed and Raytheon, and have had a good chance of winning the OTH competition -- had Boeing decided to proceed. Whatever the company's real reason for backing out, the fact that Boeing is backing out is very good news for its erstwhile competitors.