The virtual reality (VR) market is expected to be worth about $34 billion annually by 2022. Tech investors are understandably excited about this expanding opportunity, particularly as giants like Facebook and Alphabet make huge plays in the space.

Those looking to benefit from this fast-growing market -- and receive a dividend at the same time -- should consider what Microsoft (NASDAQ:MSFT), NVIDIA (NASDAQ:NVDA), Qualcomm (NASDAQ:QCOM), Intel (NASDAQ:INTC), and International Business Machines (NYSE:IBM) are doing in virtual reality. 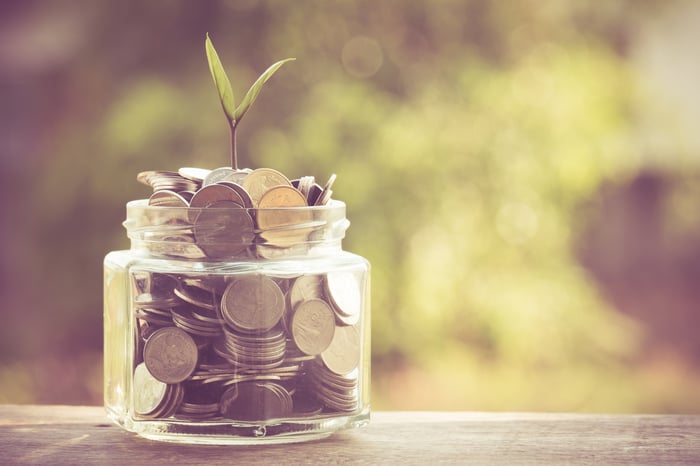 Microsoft folds its augmented reality and virtual reality pursuits into one category that it calls "mixed reality." That can be a bit confusing when it comes to parsing the success of the separate formats, but just know that Microsoft is making very early moves into what could become a transformative play in the virtual space.

The company's HoloLens headset is its most outward-facing mixed reality play right now. The device allows its users to see holographic images overlaid into the real world, and developers are exploring a wide array of possibilities for the tech. It can give people new ways to view industrial equipment, could be used in the training of surgeons by overlaying real-world images with digital information, and may transform how we communicate with others through telepresence.

But one of the most important aspects of mixed reality that Microsoft investors should focus on are its efforts to use it as the foundation of a new computing platform. Facebook CEO Mark Zuckerberg has suggested that virtual reality might be the next major tech platform, and the Windows-maker is treating it that way. As PC Magazine wrote back in April, "Microsoft is building a software and device ecosystem around the Windows Mixed Reality platform, formerly known as Windows Holographic."

Don't worry if you've overlooked NVIDIA as a dividend player in the past. The company only started paying one out back in 2012, and it's admittedly yielding far less than other companies in VR space; its current trailing 12-month yield is just 0.37%, with a payout ratio of 18.9%.

Despite it not being the most lucrative dividend stock, investors should keep two things in mind about this company: First, it has massive potential in VR; and second, the stock appears to have a lot of room to grow.

Gaming is one of the most important segments of VR, and NVIDIA's graphics processing units (GPUs) already dominate the discrete desktop GPU space -- which is key to gaming -- with a 70.5% market share. That means that when PC manufacturers are in need of high-end graphics processing power (which VR eats up by the bowl-full), they most often look to NVIDIA.

NVIDIA has been doing its own part to help the VR market expand by releasing a suite of APIs to assist developers in creating VR games and apps, and has even released its own VR game to show off the capabilities of its products. Additionally, NVIDIA is helping the PC market adapt by launching VR-ready graphics cards for notebooks, which helps expand the computing platforms that can fully handle VR beyond the realm of high-powered PCs.

Intel's bet on VR may be more muted than other tech players, but it isn't all that different than NVIDIA's in some regards. The chipmaker expects that more powerful (and expensive) processors will be needed to power PCs and VR headsets as this market expands, which it hopes will result in it selling more chips.

Intel is already marketing some of its chips for the VR market; for example, on its website, it says that its iCore 7 processor helps create "a great VR experience." To help show off its processors' capabilities, Intel is working its own VR headset, called Project Alloy, which has an Intel chip embedded in the device itself, allowing it to operate untethered from a computer. It's worth noting here that Alloy is expected to run a version of Microsoft's mixed reality software when it launches at the end of this year.

Intel is solid bet for both VR and income investors. Its shares currently yield 2.9%, and the company sports a payout ratio of about 45%.

Like Intel, Qualcomm is jumping into the VR fray through its processors and a headset developer kit. The company is putting its Snapdragon 835 processor into the standalone headset, along with other chips for wireless connectivity and memory.

The device will ship by the second half of this year and can be used without having to be tethered to a computer. In fact, at Google's I/O conference earlier this month Qualcomm and Google announced that the chipmaker is working with Google to bring untethered Daydream VR headsets to market later this year, which will also be powered by the Snapdragon 835 processor.

Aside from its growing VR opportunities, Qualcomm has an impressive dividend yield of 3.6%, and 14 consecutive years of dividend growth.

I know, I know -- IBM seemed like an unlikely VR play to me too -- at first. But it turns out that the company's Watson artificial intelligence platform has virtual reality applications as well. IBM recently partnered with game maker Ubisoft to incorporate speech recognition and cognitive capabilities from its Watson into the latest Star Trek virtual reality game. According to IBM, gamers will be able to speak commands in the game, and Watson will help the system parse what they're saying and respond appropriately in a way that games have never been able to do before.

The company also recently launched a developer kit specifically designed to help content creators incorporate natural language processing into VR software. As IBM noted in a recent press release, "We are only just seeing the impact of virtual and augmented reality and IBM is committed to providing developers with the tools they need to innovate and be competitive in this AI and Cognitive era."

IBM is just shy of Dividend Aristocrat status, having raised its payout every year for the past 22 years. Its current yield is a solid 3.7%, with a 46% payout ratio, which gives investors looking to profit from VR (and AI) a nice incentive to bet on IBM's prospects.