My wife and I were being pitched a timeshare.

Our salesperson was offering a value proposition she thought was unbeatable: If we paid $100,000 for this timeshare, we'd save roughly $150,000 (she was rounding) in lodging costs over the next 20 years. 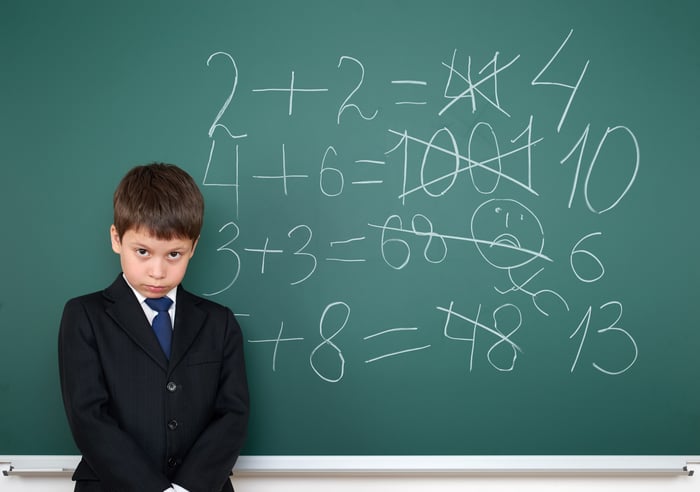 Before you send me back to second-grade math class, let's consider the time value of money: Money today is inherently more valuable than the same amount in the future.

"Obviously," you may be thinking to yourself, "since inflation reduces the value of money in future years. That's why my work gives me that 2% cost-of-living adjustment each year." So $100 a year from now might only purchase the same amount as $98 today. Which makes $100 today inherently more valuable.

But that's not actually the primary principle at play here -- it's what you can do with that money today to make it grow, so that it will be worth more a year from now.

I'm talking about investing in the stock market.

Over the past 100+ years, the S&P 500 (large-cap U.S. stocks) has returned an average of 7% annually after accounting for inflation.

For me, the key word in the preceding sentence is "average." To achieve 7% annual returns, you didn't have to recognize Amazon's potential early, pore through clinical trials to find the best HIV drugs and model out their sales, or shell out $400 for a (sham) day-trading course.

You didn't have to do something brilliant or have great foresight. All you had to do was be average. And invested.

With the advent of the index fund, whose job is to passively track an index (like the S&P 500) and deliver comparable returns, it's easier than ever to get those gains. (In fact, even the world's greatest stock picker recommends it.)

The timeshare salesperson didn't understand (or was ignoring) the time value of money.

To demonstrate the power of this principle, let's work the math on that timeshare I was offered. I will show you how $100,000 today is worth a great deal more than $150,000 over the next 20 years.

We came to that $150,000 number because my wife and I usually travel for about three weeks a year -- 21 days -- and expect to spend about $150 a night on hotels. That works out to $3,150 in lodging expenses this year. The travel industry has seen 8% inflation over the last few years, so the salesperson assumed that we'd see that annual inflation permanently over the next 20 years. That level of sustained inflation in discretionary spending is unheard of, but let's just assume it's accurate.

A massive win for time value of money -- to say nothing of the benefit of vacationing in a bunch of different places without being tied to wherever timeshares exist.

But only if you're smart about it

It is so easy to lose most of that extra cash if you don't maximize the time value of money.

Let's pretend, instead, that my wife and I decide that the $100,000 is our travel lodging fund for the next 20 years. If we aren't going to spend it on a timeshare, we'll allocate it to hotels instead. We pay our lodging expenses out of the fund each year, and as a result we have to invest the $100,000 more conservatively and put more money into cash. (After all, you shouldn't invest in stocks with money that you plan to use in the next five years -- who can predict the next market downturn?) We achieve a 4.5% annual growth rate, and as mentioned above, we subtract lodging expenses each year from that fund.

B) We withdraw money from the fund every year. The loss of that capital compounding reduces things by roughly $58,000.

C) Taxes further reduce our gains. Since we have to pay capital gains taxes each year on the amount that we sell out of the index fund, we pay an effective 15% surcharge every year on that money. That reduces returns by another $30,000 -- which is less than the $58,000 we pay in the scenario above, but only because our returns are so much lower.

Here's how that looks in chart form.

We still come out ahead compared to buying a timeshare -- by roughly $8,375.

Use the time value of money to your advantage

The time value of money doesn't just matter when you're buying a time share -- and it doesn't always work in your favor, either. When you take out a 30-year mortgage, that's three decades of payments and interest accruing against you.

Assuming you're charged a 4% annual interest rate on that loan (roughly average as of the time of this writing), then you'll end up paying a whopping $270,179 over the term of that loan.

The numbers get even uglier if you're paying interest on a credit card.

Time value of money is an incredibly powerful principle. The key is to understand when it's working for -- or against -- you, and what those costs entail.

I'm not saying don't ever buy the timeshare. But go into the timeshare negotiation recognizing what that money could be worth when invested -- and demand a price that makes it worth your while.

Recognize the implicit costs of these money decisions, and don't let some slick salesperson make you forget them. Most importantly, remember that time value of money, when properly used, can do amazing things for your wealth.