Shopify (NYSE:SHOP) is crushing the market right now. Shares of the cloud-based e-commerce technologist have soared 260% higher since the beginning of 2016, more than doubling in 2017 alone.

Investors hoping to match Shopify's returns are staring down a high bar. We asked three of our top Motley Fool contributors for their best ideas, and they came back with recommendations for PayPal (NASDAQ:PYPL), Fossil (NASDAQ:FOSL), and Universal Display (NASDAQ:OLED).

Read on to see how two technology stocks and a retailer could measure up to Shopify's massive returns. 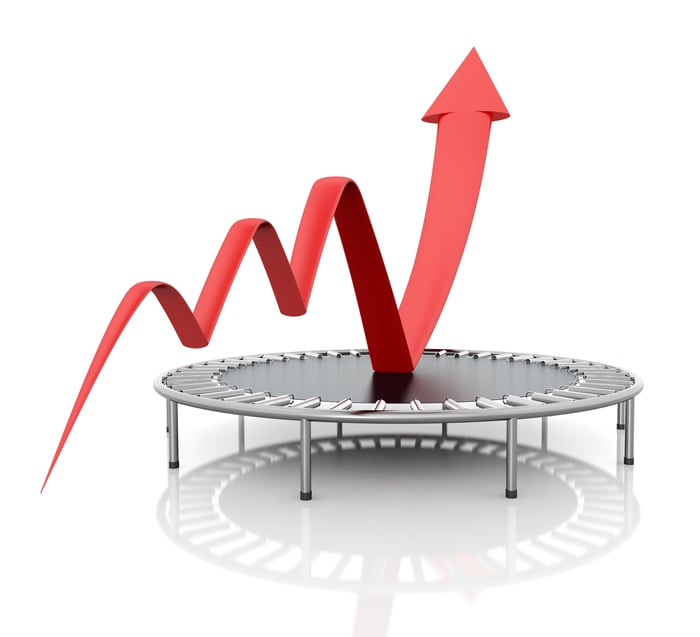 This OLED technologist is just getting started

Steve Symington (Universal Display): Shopify shares have more than doubled though the first five months of 2017 -- and that's after popping nearly 70% in 2016. That raises the question: How many people believed they missed the Shopify boat after last year's pop, only to watch shares deliver even better gains so far this year?

With Universal Display stock also having more than doubled year to date, I think shareholders of this maker of organic light-emitting diodes (OLEDs) are facing a similar predicament today. After all, Universal Display skyrocketed to new all-time highs in May, after its first-quarter results crushed expectations and led the company to increase its full-year guidance.

"With customers' mounting investments in new manufacturing capacity and the development of an array of new display and lighting products," added Universal Display CFO Sid Rosenblatt, "we expect our growth trajectory to be positive for the foreseeable future."

Universal Display's OLED display technology is being used in a plethora of electronics devices, notably including Samsung's Galaxy-series devices, LG's stunning OLED TVs, and even the Apple Watch. What's more, Apple is widely expected to introduce its first OLED iPhone later this year. And I've been patiently watching novel OLED lighting solutions become more pervasive for the past several years.

As it stands, I continue to think Universal Display's stellar growth remains in its earliest stages. And despite its recent climb, Universal Display stock could still put Shopify's impressive gains to shame.

Tim Green (Fossil): Shares of Fossil, which makes and sells watches as well as accessories such as jewelry and handbags, have been put through the wringer over the past few years. The stock is down an astounding 91% from its peak in late 2013, decimated by a combination of weak demand for its products and the general malaise plaguing much of the retail industry. 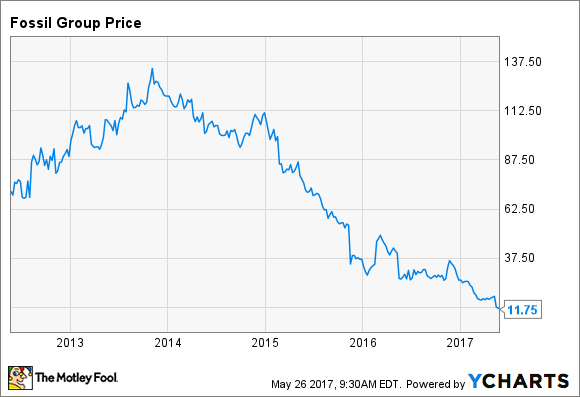 Fossil's plan to turn things around is built around wearables. The company is on track to launch 300 different wearable products this year, betting that consumers will gravitate toward devices with more functionality. Misfit, the fitness-tracker company Fossil acquired in 2015, plans to launch the $199 Misfit Vapor smartwatch, powered by Android Wear 2.0, in the next few months. This will compete not only with the more expensive Apple Watch, but also with Fitbit's upcoming smartwatch.

While Fossil stock is firmly in the doldrums, a massive recovery could be in the cards if the company can stabilize its business. The stock trades for less than 0.2 times sales and about 0.6 times book value, a valuation that's oozing with pessimism. There are good reasons to be pessimistic, and Fossil stock could go much lower if sales continue to slump. But at the same time, any sign of progress could mean big returns for investors.

Anders Bylund (PayPal): There's no denying that Shopify generates fantastic top-line growth, but it isn't that hard to find stocks with future return projections on par with this ticker. Shopify's stock is trading right in line with Wall Street's latest price targets. If the analyst consensus is correct, the stock should take a breather and trade sideways for a while.

In my view, PayPal offers stronger future gains while keeping the focus on back-end operations for e-commerce sales, as Shopify does.

Viewing some charts for Shopify and PayPal side by side can be an enlightening experience: 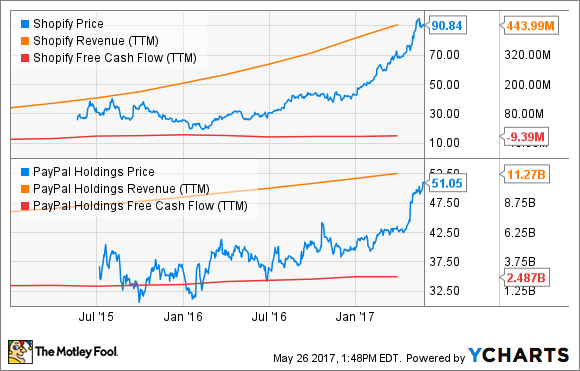 Both companies entered the stock market last summer and have beaten the market so far. Both show strong revenue growth and stable cash flows. So far, so good.

But when you look a little closer, you'll find that PayPal is a mature and monstrous cash machine right now, having generated $2.5 billion of free cash flow out of $11.3 billion in top-line revenue over the past year. At the same time, Shopify burned $9.4 million of cash based on just $444 million in sales.

Sure, Shopify is growing faster than PayPal at the moment. But the stock is priced for absolute perfection and would probably tumble at the first sign of slowing revenue growth. Shopify might earn its $8.8 billion market cap someday, but it remains a gamble until further notice. PayPal, meanwhile, supports every inch of its $61 billion market cap with modest sales growth and rich cash earnings, trading at just 12 times trailing free cash flows right now.

So if you want a direct play on e-commerce operations without picking a side in the eternal retailer wars, Shopify looks like a fun but speculative bet while PayPal is poised for predictable growth over the long haul. PayPal's investing thesis makes far more sense to me, though your mileage is free to vary.

n
This article represents the opinion of the writer, who may disagree with the “official” recommendation position of a Motley Fool premium advisory service. We’re motley! Questioning an investing thesis -- even one of our own -- helps us all think critically about investing and make decisions that help us become smarter, happier, and richer.