Few large-cap companies have had as grueling a last three years as Qualcomm (NASDAQ:QCOM).

Hit by a raft of fines and court cases the world over, Qualcomm stock has underperformed its benchmark, the Nasdaq Composite, by a whopping 55% over this time frame: 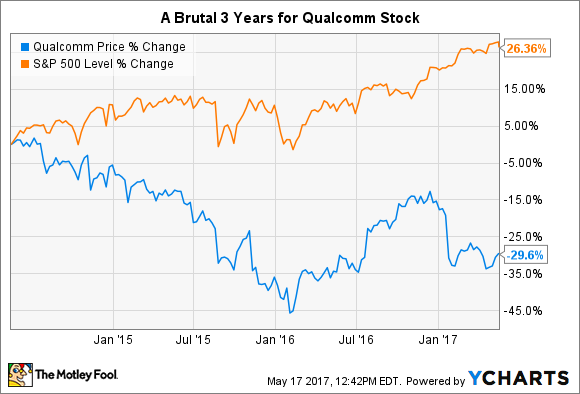 To be sure, the company has attempted to counter the seemingly permanent stream of bad news. However, cautious investors may want to think twice before purchasing Qualcomm stock, as the road ahead still appears fraught with risk for the mobile-chip giant.

First, and far less daunting, the possible financial sting would hurt but not kill Qualcomm. In fact, we can use Qualcomm's history of antitrust fines to estimate a plausible range of future costs, then apply them to the company's many ongoing legal battles.

We know Qualcomm already paid $975 million to settle an antitrust case with Chinese regulators in 2015. Similarly, South Korean regulators also fined Qualcomm $853 million at the end of 2016, though the company has yet to pay this, as it plans to challenge the ruling. So admitting a fair degree of imprecision here, we can reach a ballpark estimate that Qualcomm's fines may run about $1 billion each.

Since at last count Qualcomm had four anti-competitive legal cases underway -- South Korea, the U.S. Federal Trade Commission, the European Union, and Apple -- we can estimate that Qualcomm's legal fees might clock in somewhere around $4 billion, assuming that no more arise in the near future.

Qualcomm carried about $30 billion in cash and investments as of its most recent earnings report, though a large portion of it was likely earmarked for Qualcomm's pending $47 billion acquisition of NXP Semiconductor. However, given its ability to tap debt markets, Qualcomm can probably afford to meet its legal bills, barring some unexpectedly high fee from regulators.

This brings up the second, more ambiguous, and possibly more pernicious aspect of Qualcomm's legal issues: possible alterations to its patent-licensing terms. Though these are difficult to handicap, investors need to be aware that Qualcomm has been forced to modify its patent-licensing fees in the past; it did so as part of its settlement with Chinese regulators. This didn't materially affect Qualcomm; its revenues actually increased in China from 2015 to 2016.

However, the fact that Qualcomm's core business driver could possibly see its profit model weaken is absolutely essential for any prospective investor to realize, even if it's hard to apply a possible dollar value to this unseemly outcome. 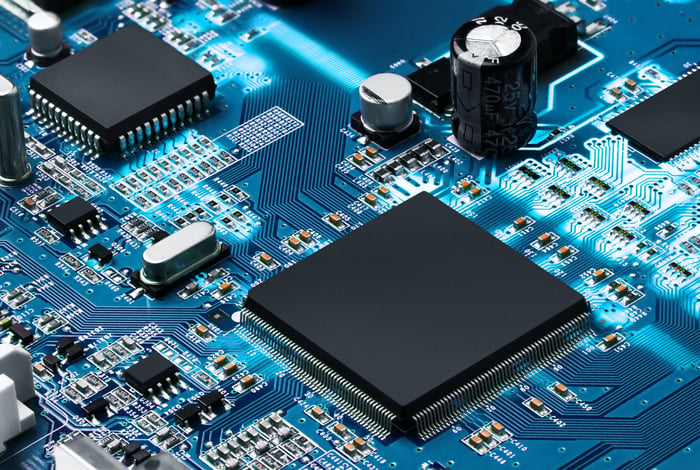 Qualcomm stock is both cheap and risky

So given all the risk clouding its business outlook, it should come as no surprise that Qualcomm stock has been bid down to temptingly cheap levels. For context, here's a quick snapshot of the beleaguered chipmaker's valuation metrics:

These metrics compare quite favorably to the market averages; the S&P 500 currently sports a P/E of 25 and a 1.9% dividend yield. However, given all the uncertainty surrounding Qualcomm, is this kind of discount to the market justified, or does it reflect an opportunity for investors?

Turning to the analyst community as a possible guidepost, the average of sell-side estimates expect Qualcomm's sales to fall 3.4% this year and rise 0.6% in 2018. More concerning still, they forecast its earnings per share to fall roughly 5% this year and 4% next year -- far from cataclysmic, but certainly not ideal.

Given the lack of clarity surrounding Qualcomm, it's extremely difficult to get a sense of what the future holds for the company's financial performance and, by extension, its share price. However, if the current lawsuits produce fines are limited to expectations discussed above, Qualcomm stock will likely have been an attractive buy in retrospect. On the other hand, since it's so hard to predict the most likely result for Qualcomm, investors might be best served by simply focusing their efforts on less risky areas of the tech industry until more evidence emerges.