In early April, World Wrestling Entertainment, Inc. (WWE 5.17%) held its WrestleMania 33 and set new records for online viewership of the event. More than 1.95 million households watched the event via the WWE Network, an internet TV streaming product owned by WWE. Additional viewers watched it as a pay-per-view (PPV) event through traditional TV distributors, though the company has not yet reported how many, and, for the first time, the event was made available to viewers in China on a PPV basis with a choice of English or Mandarin commentary.  WrestleMania, considered WWE's Super Bowl, is responsible for the company's highest viewership and strongest viewing quarter each year.

Let's take a look at how WrestleMania and the WWE Network play into World Wrestling Entertainment's game plan.

WWE set its sights on growth when it launched the WWE Network in February 2014.  It has a unique characteristic among streaming TV providers in that it owns all its content, 100% outright. By launching the WWE Network, the company went from being a content creator working with traditional distribution partners, such as cable and satellite TV providers, to launching its own network, effectively competing with its traditional distributors.

The fact that the company owns all the content gives it immediate global distribution rights, with the ability to launch its network in any country as it sees fit. The opportunity to enter China and expand in India would appear to provide tremendous growth opportunity going forward.

The company's decision to buck the tide and launch an internet-based product may well be one of the most important decisions in the company's 35-year existence.

As one might expect, a large portion of WWE's revenue is generated from its media group, which includes WWE Network subscriptions and pay-per-view fees. The pie chart below shows a breakdown of the various revenue segments for the company as well as the geographical numbers. With only 26% of revenue coming from outside of North America, that leaves a big runway outside the region. 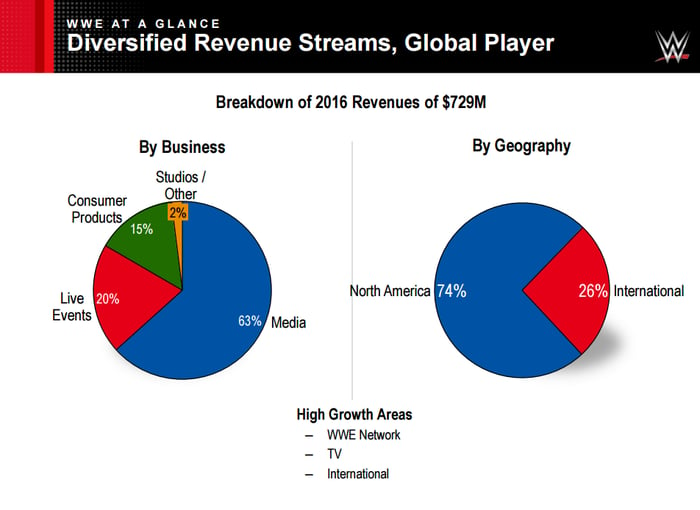 Speaking at the Needham Emerging Technology Conference on May 17, Chief Strategy and Financial Officer George Barrios explained that 75% of the consumption of WWE video comes from outside North America, which accounts for 26% of the company's revenue. The country that views the most WWE content on traditional television is India.

The chart below shows where and how 6 billion hours of WWE content were viewed in 2016. 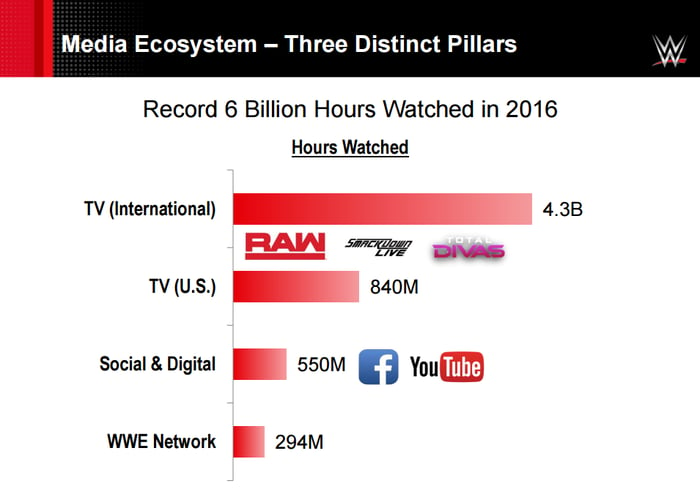 The disparity between where the content is being consumed and where the revenue comes from looks like a monetization opportunity for the company. The table below shows the ranking of the company's top four video revenue sources:

Here is how CEO Vince McMahon described WWE's international opportunity in early May in the WWE Q1 press release:

We are pleased with the continued growth of WWE Network, which is a critical building block of our content strategy. The recent production of WrestleMania set records for network viewership as well as digital and social engagement. As we leverage continuing innovation to extend our reach in India, China and around the world, we are confident that the enduring and increasing global power of our brands will provide a solid foundation for long-term growth.

Another indicator of the popularity of WWE content is the information investors can glean from social media. WrestleMania 33 was the most social event in WWE history, according to the company. It accounted for nearly 30% of all television-related social media interactions on the day of the event, according to the company, including 2.8 million Wrestlemanaia tweets throughout the day. 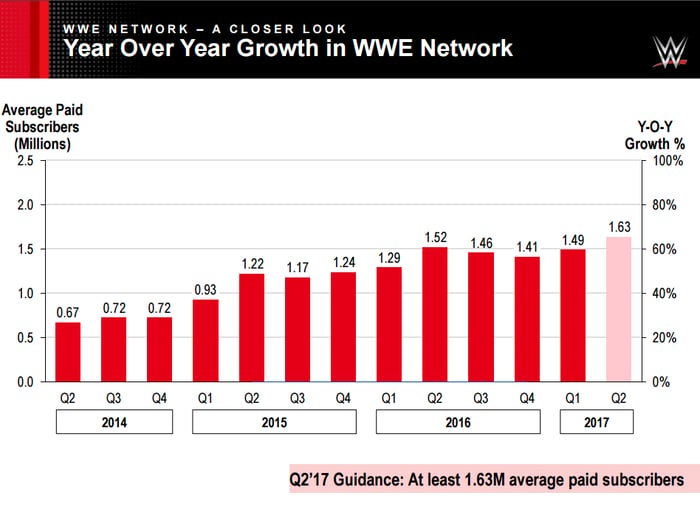 WrestleMania 33 was a great success. Investors need to keep a sharp eye on to how WWE can use events like WrestleMania to drive its growth. WWE Network paying subscriber additions coupled with the company's ability to drive monetization of its international customer base are two key areas to watch. If it can manage to win on both fronts, the company should be able to show investors solid growth going forward.