Please ensure Javascript is enabled for purposes of website accessibility
Log In Help Join The Motley Fool
Free Article Join Over 1 Million Premium Members And Get More In-Depth Stock Guidance and Research
By Steve Symington, Dan Caplinger, and Jason Hall - May 31, 2017 at 7:31AM

These three businesses are built to last.

Buying and holding shares of great companies is the best way to predictably generate wealth over the long term. But with thousands of choices in today's bustling stock market, finding those companies isn't as easy as it might sound.

So we asked three top Motley Fool contributors to each pick a stock they believe investors would be wise to consider holding for the long haul. Read on to learn why they chose Anheuser-Busch InBev (BUD -1.24%), Nucor (NUE 1.47%), and General Electric (GE -0.89%). 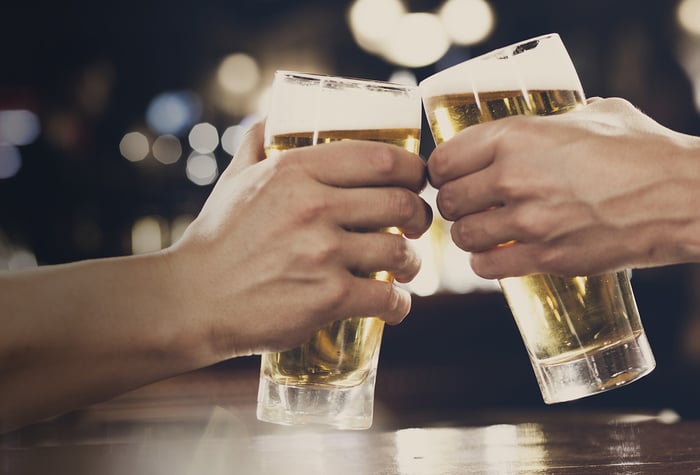 This industry will never die

Steve Symington (Anheuser-Busch InBev): If there's any product that will indefinitely entice consumers to keep coming back for more, it's beer. And in the investing world, arguably no company is better positioned to that end than brewing juggernaut AB InBev.

Following the completion of its more than $100 billion megamerger with SABMiller late last year, AB InBev commands an enviable portfolio of hundreds of beer brands, including many of the world's most popular varieties, such as Budweiser, Corona, Stella Artois, Beck's, Castle, Foster's, Michelob Ultra, Modelo, and Skol.

That's not to say it's all smooth sailing for AB InBev. Last year was a difficult one for for the brewing industry, with volumes declining amid increasing competition from larger and small brewers alike, as well as specific geographic headwinds from economic weakness in countries such as Brazil.

But AB InBev's core "global brands" -- that is, Budweiser, Stella Artois, and Corona -- have continued to prop up the company, delivering healthy 12.1% overall growth in its most recent quarter. In addition, AB InBev has yet to realize more than $1.7 billion in cost savings related to the merger, which management told investors in early May was "progressing well." So over the long term, I have no doubt that AB InBev will continue to survive and thrive.

The best steelmaker in the world

Jason Hall (Nucor Corporation): Steelmaking is a tough, cyclical business, and many of the biggest steelmakers out there can't make money when the cycle turns down. This situation can make for a rough investing environment, where understanding the industry and the demand cycle can make the difference between a winning investment and a loser that may never come back.

Nucor is the likely exception. For starters, Nucor is a low-cost producer and has proved capable of making money in almost any market condition, while its competitors can profit at the market top but often shift to big losses at the first sign of a slowdown.

Not only does this competitive advantage mean more steady earnings power, but it has also led to a very strong balance sheet, and that's something management has put to good use, improving operations and making smart acquisitions to build an even bigger and stronger company. This situation allows Nucor to routinely emerge from cyclical downturns even stronger.

And that's certainly the case today. Over the past few years, Nucor has spent billions on "bolt-on" acquisitions, adding capacity and capabilities in high-demand, high-margin steel products, widening its competitive advantage at a time when the steel market is starting to strengthen for North American producers.

Combined, this means Nucor is perfectly positioned for the recovery of the steel market, while also having the advantage over its peers of being able to ride out the next downturn. And if history teaches us anything about this company, it will probably emerge from that downturn stronger than ever.

Dan Caplinger (General Electric): General Electric is one of the oldest companies in the stock market, and it has done a good job of producing strong returns over the long haul for its shareholders. The company has reinvented itself several times, starting out as an industrial powerhouse, evolving into a business-savvy conglomerate, then specializing in the highly profitable finance arena, and finally casting aside its financial focus to return to its industrial roots. Along the way, General Electric has learned valuable lessons, and its investors have benefited from those learning experiences.

Many investors have lost patience with General Electric, largely because it has failed to regain the levels it hit before the financial crisis. Yet General Electric is working hard to fight through a cyclically challenging time for many of its businesses, especially its recent foray into the oil and natural gas industry. Now that energy has started to rebound, GE hopes that it will see better activity in its business there as well as positive momentum for equipment and power-segment sales. General Electric's turnaround will take longer than a couple of quarters to play itself out entirely, but the shareholders that have stuck with the industrial conglomerate through thick and thin can attest to the company's ability to survive and thrive over the long haul.