Looking for value stocks to add to your portfolio this quarter? We have some great suggestions.

Value investing is one of the surest strategies for building wealth: Find companies that are being priced below their true worth in the market, buy shares, wait for sentiment to change, and reap the rewards. In addition to trading at below-average multiples, these companies often pay dividends, so you're rewarded for your patience.

This quarter, follow in the footsteps of famous investors such as Benjamin Graham and Warren Buffett and scoop up shares of the best value stocks. To help identify them, we've asked three Foolish contributors to highlight their favorite value stock to buy right now. Read on to learn why Nike (NKE 2.80%), Apple (AAPL 1.21%), and Rush Enterprises (RUSHA -2.21%) are three great value stocks for the second quarter. 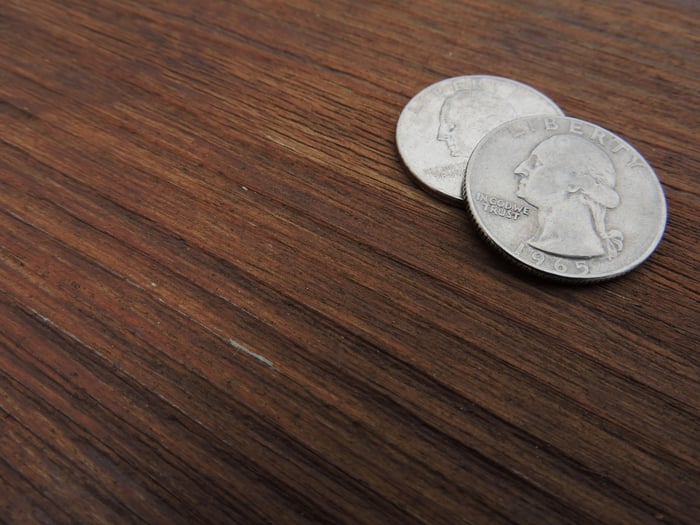 This powerhouse brand is on sale

Brian Feroldi (Nike): North American retail sales have been in a funk lately. Many big-box retailers have reported weak results and have decided to close down hundreds of stores. That weakness has caused investors to sell off shares of many companies that have North American retail exposure, which includes apparel giant Nike. Given the pullback, I think value investors should give this megabrand a closer look.

Nike's recent results show that the company is still firmly in growth mode. Total sales rose 7% on a currency-neutral basis, thanks to strong growth in international markets. While Nike's margin took a dip, the company's bottom line soared 24% higher from the year-ago period. Those are numbers that any retailer would kill for.

However, the market appears to be laser-focused on the company's futures orders. This figure declined 1% on a currency-neutral basis last quarter, which hints that future results won't be so rosy. While that may be the case for the next few quarters, I think the decline in understandable given the wave of store closings. After all, those big-box retailers have to right-size their inventory levels before they place reorders.

Despite the near-term headwinds, the company's results show that Nike's brand remains as strong as ever and that its international opportunity continues to be huge. With its shares trading around 21 times next year's earnings estimates, I think it's a fine time for potential shareholders to step up to the plate.

Most valuable value stock in the world

Kristine Harjes (Apple): Earlier this month, Forbes named Apple the most valuable brand in the world for the seventh consecutive year. With that kind of strength, it's no wonder the company has been able to sell its smartphones for an average price of $695, giving it a mighty 92% dollar share of this market. Some analysts have been criticizing Apple for a lack of innovation, but there's no denying that Apple is a cash-flow machine.

The iPhone, Apple's bread and butter, is responsible for roughly two-thirds of Apple's total revenue and raked in $33 billion last quarter alone. Despite having other well-known products such as the iPad and the MacBook, the second most important revenue driver is the services segment (think App Store), which has been seeing double-digit growth rates. I have a hard time believing the bears who say that Apple's glory days of innovation are behind it, and I'm optimistic that future revenue growth will be bolstered by any one of several innovative moonshots.

Apple has an absolutely monstrous amount of cash on its balance sheet -- in fact, its $67 billion of cash and short-term investments is larger than the GDP of two-thirds of the countries in the world. Jaw not on the ground yet? Consider that $67 billion is enough for a cash purchase of a company the size of Tesla. While that comparison is just for perspective, there is a great deal of speculation about whether Apple might use all that cash to make a splashy acquisition. At the very least, it's a huge asset to have the flexibility to go out and buy growth if management spots an enticing opportunity.

Looking for more proof that Apple's a buy? The company led by the world's best-known value investor, Warren Buffett's Berkshire Hathaway, has built a massive stake in Apple, making it one of Berkshire's largest holdings. Apple is currently trading at under 16 times free cash flow, making the second quarter a great time to buy shares of what could very well be the first trillion-dollar market cap company.

Rich Duprey (Rush Enterprises): Texas trucker Rush Enterprises continues to be pressured by a sluggish energy sector, a choppy freight environment, an excess of tractor-trailer capacity, and low used-truck values that are hurting truck and parts sales, as well as service revenue. That all makes it a great pick for value-oriented investors. 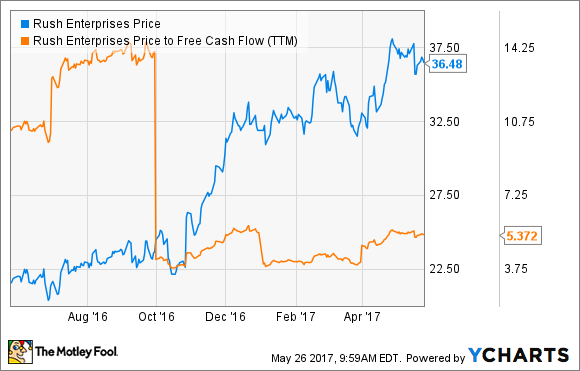 The truck market has been especially hurt by oil prices that remain at less than half their peak of $107 a barrel in June 2014, though they also recovered a lot of ground from their lows. But trucking fleets expanded during the oil boom years, as tractor-trailers were in high demand to transport oil and equipment. Today, not so much.

Those spasms hit heavy truck makers such as Rush hard, which led it to close numerous dealerships last year. Still, it operates the largest network of commercial vehicle dealerships in North America, and with the energy and construction sectors beginning to tick up, Rush Enterprises is looking for a better-than-expected year this year, which will help in its parts and service business that accounts for 67% of total revenue. Where it has been seeing some strength is in medium-duty trucks, particularly in the vocational area and small fleets, though they've been lower-margin ones.

Because the business looks like it's coming back in a healthy manner, if not overtly robust, Rush Enterprises stock looks particularly attractive even though its stock is up 70% over the past year.

Shares trade at 28 times earnings and 19 times next year's estimates, making it look fairly valued, but it also trades at a minuscule fraction of its sales and just five times the free cash flow it produces, making it exceedingly discounted. With analysts predicting Rush Enterprises can grow earnings at 18% annually for the next five years, it would the pullback its stock has experienced after hitting its 52-week high makes it a good candidate to watch this quarter.