Please ensure Javascript is enabled for purposes of website accessibility
Log In Help Join The Motley Fool
Free Article Join Over 1 Million Premium Members And Get More In-Depth Stock Guidance and Research
By Andrew Tonner - May 31, 2017 at 9:13AM

As Apple’s share repurchases have continued at a torrid pace even as Apple's stock price has risen, how should investors view this trend?

The short answer is that it's been extremely effective in enhancing shareholder value since its 2012 inception. The company has wisely spent money scooping up its undervalued shares, reducing shares outstanding and boosting EPS.

Yet stock repurchases have continued unimpeded in recent quarters, even as the Mac maker's stock price has soared in anticipation of the company's forthcoming redesigned iPhone. 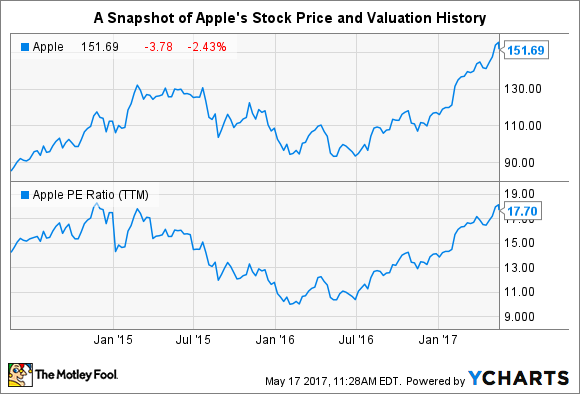 As great as Apple's buybacks have been, with the stock trading at highs is the company at risk of destroying shareholder value by overpaying for its own shares?

Let's look at the most recent update on Apple's buyback program and consider how investors should understand it in light of the market's increased bullishness on Apple stock.

In its recent earnings report, Apple supplied a supplemental update to its capital return program. The document shows that the pace of the tech giant's share repurchases continued at full steam during the company's fiscal second quarter.

Looking back by fiscal year, we see Apple increased the pace of its buybacks by $5 billion dollars in the company's two most recent quarters, even as its stock price continued to climb.

All told, Apple has repurchased a whopping $151 billion in shares since 2012. And in its latest earnings report, Apple's board of directors approved another expansion of its capital return program. The total dollar value allocation now stands at a cool $300 billion, $210 billion of which is earmarked specifically for share repurchases.

Apple's buybacks have been an unequivocal boon to its shareholders since it began. A major reason for that has to do with the fact that Apple shares have been fairly cheap, often at a P/E somewhere in the low-teens in recent years. In fact, Apple's buybacks are plainly the reason that the company's EPS increased 41% over the last five years, much faster than the 14% net income expansion over the same period.

But we have to ask again: With Apple's valuation metrics pushing against all-time highs, could Apple be destroying shareholder value, especially if shares continue to climb?

Are Apple shares still a buy?

Wall Street currently rates Apple stock as a buy, even as shares hover around the consensus 12-month price target of $154.36.

Yet Apple remains cheaper than the broader market, its P/E multiples remain well below those of the market, at 19 times current earnings and 14 times forward earnings, compared with 25 times earnings for the S&P 500. And that doesn't even back out the massive $158 billion net-cash balanceon Apple's balance sheet. The likely explanation behind the disconnect between Apple's valuation and growth potential lies in its size. As the largest publicly traded company in the world, Apple's sheer size will make growing its top line increasingly difficult in the coming years, though thankfully Apple seems have have plans in place to address this critical issue.

In the medium to long term, Apple is working to establish itself in many of tech's most important future growth markets. Areas like electric vehicles, smart home operating systems and hardware, healthcare, and more are truly massive global market. As just one example, the global automotive industry drives as much as $2 trillion in annual economic output. If Apple can grab even a fraction of some of such a market, it could dramatically increase the company's sales and profit bases. And in the short term, of course, the coming iPhone 8 should trigger a wave of upgrades and new purchases that will improve Apple's financial performance even further.

Truth is, investors only really have to worry about companies buying back shares if the stock is trading at an unsustainable valuation. With Apple, the story has always been management smartly buying up undervalued shares and boosting core financials. It doesn't look like that will change any time soon.