Uranium industry giant Cameco Corp (NYSE:CCJ) is near 10-year lows, down by more than 80%. There are some good reasons for that since low uranium prices have clouded the company's financial outlook. But the forecast isn't all bleak, in fact now could be a good time to consider buying Cameco, the best pure-play uranium stock.

Although the issue ultimately boils down to too much supply and too little demand, there are a number of issues restraining uranium prices. A key turning point was the Fukushima disaster in Japan that led that country to temporarily shut down all of its nuclear reactors. It also pushed other nations, notably Germany, to make plans to remove some or all nuclear power from their grids. That single event left a huge amount of uncertainty in the market and led uranium consumers to hold off on contracting for uranium. 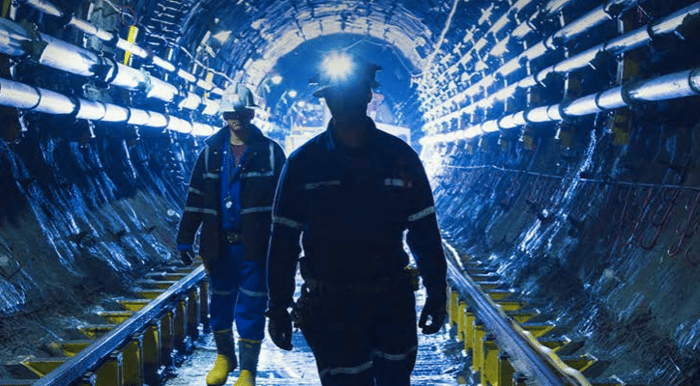 And with low prices, there's really no need for utilities to lock in prices with long-term contracts. They can get lower prices buying on the spot market. In fact, one of the other notable problems in the uranium market is that producers haven't curtailed production while the commodity's price was falling. According to Cameco, there's been a net increase in production since 2011.

Why even consider uranium?

With that background, it wouldn't be a surprise if you thought that uranium is best avoided. But there's a much brighter future. Nuclear power doesn't emit carbon dioxide, a key benefit in a world concerned with global warming. It provides reliable base-load power, which is always available and helps support alternative sources that are inherently more volatile (like solar and wind).

Oh, and the world's demand for electricity is expected to grow materially as emerging nations inch up the socioeconomic scale and developed nations increasingly rely on electricity to power their gadgets and toys. According to the International Energy Agency there's going to be a more than 50% increase in electricity demand between 2014 and 2035. Nuclear is going to be a big part of that. 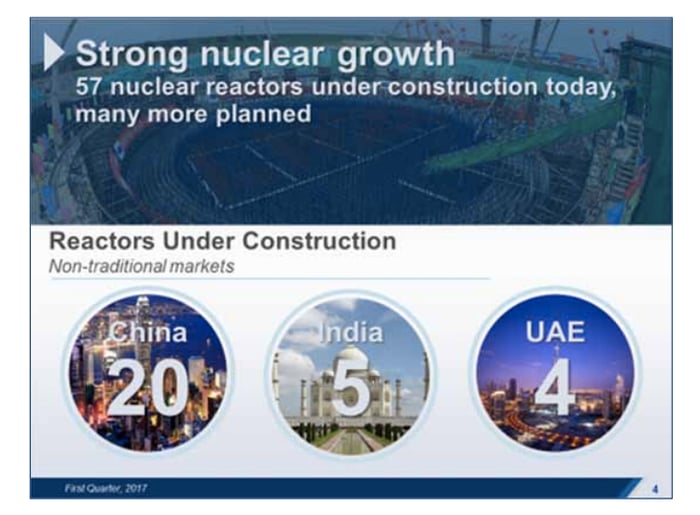 For example, there are over 50 nuclear power plants under construction around the world today. Roughly half are in Asia, with China and India leading the pack. New builds in developed nations, meanwhile, are expected to mostly offset retirements. And Japan is slowly starting to restart its nuclear fleet, with three up and running and expectations for around half of the pre-Fukushima fleet coming back online.

So there are some good reasons to have a positive outlook for uranium even though the current situation appears grim. Which is why Cameco is such a good option. For starters, it is the largest pure-play uranium miner. But that's not enough to pull the trigger.

Cameco also happens to be conservatively managed, with management willing to give up some upside potential for the benefit of increasing its resistance to downturns like the one it's facing today. A key part of that is a focus on long-term contracts, which allowed it to earn roughly $34 per pound of uranium in the first quarter compared to a spot price of roughly $24 per pound. For the full year, Cameco expects its average realized price to come in around $49 a pound.

And while Cameco lost money for the first time during the downturn last year, and has posted red ink in three of the last four quarters, those losses are largely related to efforts to adjust to the current market. For example, it's been shutting down production at higher cost mines. That helps keep costs in check and pulls supply out of the market. Both positive for the long term. 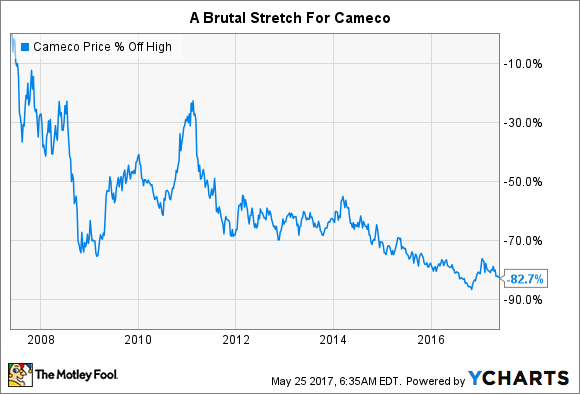 Despite that red ink, the company's foundation remains solid. Long-term debt, for example, only makes up around 20% (or so) of the capital structure. It has a current ratio, a measure of a company's ability to pay its near-term bills, of over 5. And the miner has maintained its dividend throughout the downturn, without a cut, showing a sign of commitment to shareholders. The yield is currently around 3%. Cameco easily looks strong enough to survive a troubled market.

If you are looking for a uranium investment, Cameco should be atop your list. Not only is it the largest pure-play in the space, but it's also one of the strongest financially. Yes, results have been weak, but this miner can take it. And with the long-term positives for electricity demand and nuclear power, now could be a good time to catch Cameco on the cheap.