If you’re looking to buy a rare earth stock, the pickings have become slim.

It has been nearly a decade since the investing world went gaga over rare earth stocks -- and six years since the world came to its senses and tossed most of these stocks in a deep, dark hole. Since peaking at 1812 in early January 2011, the MVIS Global Rare Earth/Strategic Metals Index has lost 82% of its value and was recently clocked near its all-time low, at 331.

Yet the situation today remains much as it was back when the rare earth hysteria began. China still controls 30% of estimated rare earth reserves worldwide. China still accounts for 85% of rare earth production (including nearly 100% of "heavy" rare earth), and still produces 7.5 times as much rare earth elements by volume as does the number two supplier Australia. China still outproduces America on these elements, which are so crucial to the production of sophisticated electronics for consumer devices, wind power, and advanced military weapons, by a ratio of 25 to 1. 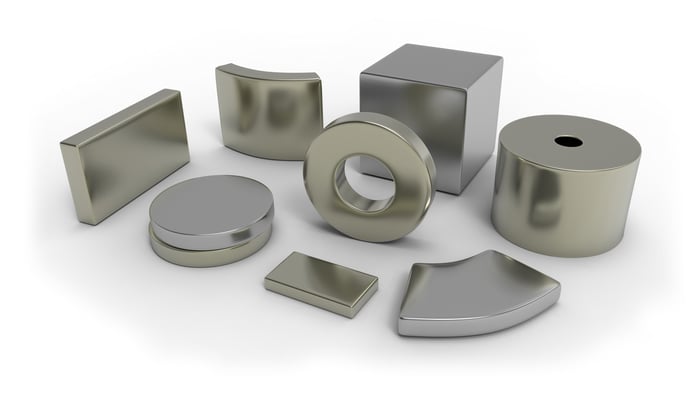 Eventually, you have to imagine that this is going to become an issue once again. You have to figure that China's stranglehold on rare earth supplies will again afford investors in rare earths produced "somewhere other than China" a chance to profit. The question is -- how?

Hold up a sec. Before you do that, what are "rare earth elements" anyway?

Rare earth elements, also known as rare earth metals, or simply "rare earths," are not especially rare -- they're just rarely found in pure form. They are often found in combination with radioactive elements, which must be removed in refining, making them costly (and often toxic) to produce. The list of such rare earths is long, and its exact configuration depends upon who is listing them.

But the general rule of thumb seems to be that if it ends in "-ium," it's probably a rare earth element.

Certain large mining concerns, such as Freeport-McMoRan and BHP Billiton, produce small amounts (relative to their core businesses) of rare earths. Pure-play, brand-name companies that focus on rare earths production, however, are basically non-existent at this point. Molycorp filed for bankruptcy in 2015, and Thompson Creek has been absorbed into Canada's Centerra Gold (CGAU -0.45%).

Where that leaves investors

Suffice it to say that this leaves investors with few remaining options for pure-play investing in rare earth metals. Basically, your choices boil down to buying shares of VanEck Vectors Rare Earth/Strategic Metals ETF (REMX -0.67%), a tiny ETF with only $57 million in net assets, which emulates the holdings and performance of the MVIS Global Rare Earth/Strategic Metals Index, or you could pick one of that ETF's larger holdings to buy stock in directly.

Should you choose the latter option, the VanEck's three largest positions (which presumably indicate its feelings about the stocks' relative attractiveness) are Australia's Iluka Resources (ILKAY), Orocobre (OROCF 1.78%), and America's Tronox Limited (TROX -3.74%).

Are these attractive investments? You decide:

Of course, this probably gives you an idea of why this sector is out of favor today. The fact that the best prospects for rare earths investing are a pair of unprofitable mid-cap companies and one small-cap selling for 100 times earnings gives you a very strong hint of how difficult it is to find worthwhile investments in rare earths.

On the other hand, you could always do what Centerra Gold did: invest in Thompson Creek by buying Centerra Gold stock itself. At a market capitalization of $1.7 billion, Centerra stock is cheaper than either Iluka or Tronox. Centerra is also profitable (earning $190 million over the past 12 months), and thus trading at a P/E ratio of less than 9.0. Granted, Centerra's projected growth rate is only an anemic 4%. But on the other hand, in addition to being a play on rare earth elements, it's got...gold!

Picking through a field of limited and unattractive options, I suspect Centerra Gold may be the least-worst option out there.