The wearable technology sector is projected to be worth $51.6 billion annually in just five years, according to MarketsandMarkets research, and in 2016, more than 102 million wearable devices were shipped, up 25% year over year.

There are plenty of wearable tech stocks for investors to choose from, but those looking to ride all of this growth and receive a dividend should consider these leaders: Apple (NASDAQ:AAPL), Microsoft (NASDAQ:MSFT), Garmin (NASDAQ:GRMN), Qualcomm (NASDAQ:QCOM) and Samsung (NASDAQOTH: SSNLF). Here's why: 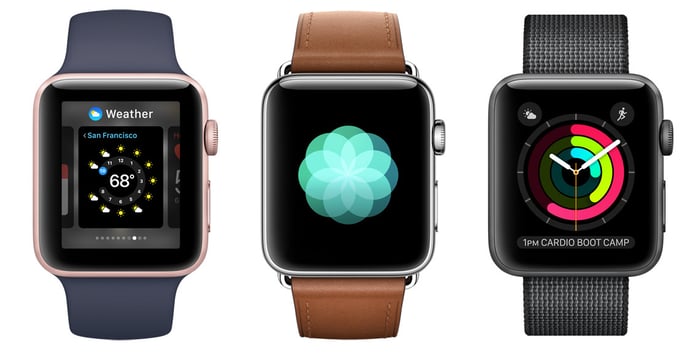 Apple has yet to overtake Fitbit as the wearable tech leader by shipments, but considering that Fitbit doesn't pay a dividend, Apple is one of the best plays on the market.

According to IDC's fourth-quarter 2016 data (the most recent available) Apple had its "best quarter ever in the wearables market" and shipped 4.6 million of its Apple Watch smartwatches, up 13% year over year. That was enough to give the company the No. 3 spot in wearable shipments, behind Fitbit and Xiaomi.

Apple pays out a quarterly dividend, which it has increased every year since it first issued one in 2012. The 10.5% boost it gave its dividend in its most recent quarter makes the tech giant an even more compelling buy for income investors.

Garmin has carved out its own niche among athletes in the wearable tech space, and currently falls just behind Apple in shipments. The good news for Garmin was that it boosted the average selling price (ASP) of its devices in Q4 2016 to $258, up from $200 last year. Additionally, its new Fenix 5 smartwatch should enhance the company's mass-market appeal, and boost its 2017 sales numbers.

On its fiscal Q1 2017 earnings call, the company said that despite a drop off in basic activity tracker demand, "we are very pleased with the performance of advanced wearables with GPS capability, which experienced robust growth during the quarter and nearly offset the steep decline of basic activity trackers."

Garmin has a trailing dividend yield of 3.92%, has raised its payout annually for the past five years, and sports a solid payout ratio of 58.29%. The company's combination of a strong position in the wearables space and generous dividend make its stock a good bet for investors.

If you're thinking "Microsoft doesn't sell wearables anymore!" you're right. After a poor response to the Microsoft Band 2, the company didn't even bring its Band 3 to the shelves, essentially exiting the market last year.

But recently, Microsoft announced that it was partnering with Trekstor to bring a completely new type of wearable to market. Instead of focusing on consumer devices (nearly the entire market right now), they will produce a yet-to-be-named wearable for the commercial market.

The only specs that have been revealed thus far are that it will have Wi-Fi and Bluetooth connectivity, voice messaging, a one-day battery life, and a 1.54-inch Gorilla Glass 3 display.

The device hasn't been unveiled yet, but if and when it arrives, Microsoft will have a first-mover advantage in a nearly untapped commercial segment of the wearables space. An additional benefit for Microsoft will lay in selling its software and services for the device, which it says will run Universal Windows applications and use the Azure cloud for services like Microsoft Cognitive Services.

If the speculative nature of that wearables bet makes you a bit nervous, remember that Microsoft has a current dividend yield of 2.2%, a 66% payout ratio, and 13 long years of annual dividend increases.

Qualcomm's processors are well-known in the mobile space, but the company is also a significant player in wearables. Its Snapdragon Wear processors can be found in more than 100 wearable devices, including over 80% of Android Wear smartwatches.

The company also announced earlier this year that its Snapdragon 835 chip would be used in a set of new smart, AR glasses for Osterhout Design Group (ODG). Qualcomm noted at the time that the new 835 was specifically designed for "experiences beyond mobile phones" and the ODG smart glasses were the first design win for the chip. It's worth noting that while there's a lot of potential for Qualcomm's processors in the wearables space, the segment is still small compared to the company's mobile and licensing businesses.

Income investors will be pleased with Qualcomm's strong dividend yield of 3.6%, and 14 years of consecutive dividend growth.

Samsung made it on to IDC's top-five wearable vendor list last year, shipping 4.4 million of its smartwatches and fitness trackers -- a 33.6% year over year increase from 2015.

Samsung differentiates itself from its rivals by offering some of the only LTE-enabled smartwatches on the market. This allows its devices, like the new Gear S3 and Frontier, to have full functionality without having to be tethered to a smartphone.

The company has a trailing 12-month dividend yield of 1.4% and a 16.6% payout ratio -- which leaves plenty of room for dividend improvements for investors looking to bet on a top wearable tech player.