Is there a more boring stock idea on the planet than Goodyear Tire & Rubber (NASDAQ:GT)? Boring and underperforming?

So far this year, Goodyear Tire stock has gained all of 3% in stock price, less than half the 7% average gain found elsewhere on the S&P 500. It's little wonder that, up until today, Morgan Stanley has counseled "underweighting" Goodyear stock -- and been right to do so. Curiously, though, Morgan Stanley took another look at Goodyear this morning and decided that maybe it's been reading the stock wrong all along. Spinning on a dime, Morgan Stanley took Goodyear stock all the way from an underweight rating (i.e., "sell") to overweight ("buy") -- and more than doubled its target price on the stock to $52 a share. 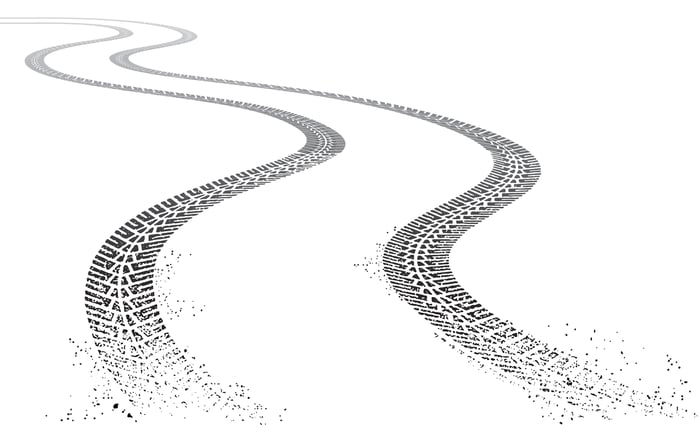 StreetInsider.com has the highlights from Goodyear's most recent quarter. When last we heard from Goodyear, the maker of Goodyear, Dunlop, and Fulda tires was reporting a down quarter featuring profits of only $0.65 per share, 4% lower than last year's first quarter. Saleswise, first-quarter 2017 was flat at just $3.7 billion in revenue. What's more, it took an "improved price/mix" to hold sales steady, because Goodyear's volume of tires sold declined 4% year over year.

2. Time for a tire rotation?

And yet, Morgan Stanley sees a much brighter future ahead for Goodyear Tire & Rubber. In its upgrade this morning, it lays out a vision of a "tech revolution in mobility" that will accelerate the growth in how far people travel in a year (vehicle miles traveled, or VMT).

According to Morgan Stanley, the confluence of electric-powered cars with ridesharing services such as Uber and autonomous driving technology like what Google is developing has the potential to grow VMT rates by "twice historic levels." Such a turnaround in travel, says the analyst, "would support tire volumes and pricing" -- and lift Goodyear Tires' fortunes along with them.

3. Potentially bigger than a blimp

And that's not all. Over the very long term, as consumers move from owning cars (and buying tires to ride) to renting rides in fleets owned by others, the analyst sees Goodyear's business model evolving. Ultimately, Morgan Stanley envisions Goodyear Tire & Rubber progressing into a sort of "transport services firm," and sees this benefiting the business immensely.

That makes sense. If Goodyear ends up selling tires primarily to companies operating fleets of electrically powered, autonomously driven, app-summoned smart cars, that would logically reduce the need to spend on advertising tires to consumers. It would simplify distribution networks and cut the cost of shipping. It would, in short, help to make Goodyear Tire & Rubber more profitable.

In the short term, therefore, while Morgan Stanley sees Goodyear earning only $3.71 per share this year (down from $3.76 previously), the analyst is raising its earnings farther out -- to $4.13 per share earned in 2018 and $4.46 in 2019. The analyst has even tripled its estimate of Goodyear's "terminal growth rate" to 1.5% earnings growth annually after the new growth spurt has ended.

All of this makes the future look pretty bright for Goodyear Tire stock, but the even better news is that Goodyear Tire looks like a mighty fine investment already today. Priced at a low 7.2 times trailing earnings, even analysts not named Morgan Stanley see Goodyear as capable of growing earnings at about 6.5% annually over the next five years. When you combine that growth rate with Goodyear's modest 1.2% dividend yield, you end up with a total return ratio of 7.2 divided by 7.7 equals about 0.9 -- a nice price to pay for one of the biggest names in tires, with a future growth kicker.

Granted, I'm not 100% convinced that Morgan Stanley is seeing the future of car travel accurately. I certainly don't expect to see entire fleets of autonomously driven cars carrying passengers around by 2018, or even 2019. But given the cheap valuation of Goodyear stock, I suspect even the chance that Morgan Stanley is right makes it a decent investment today.