Look beyond the short-term membership spike.

Let's get this out of the way early: The newest season of House of Cards will be a solid hit for Netflix (NFLX -2.12%).

As of this writing, it's the most popular television series on review aggregator Rotten Tomatoes. It boasts a huge base of built-in support from viewers who've become attached to the franchise over its prior four seasons. And Netflix will be heavily promoting the show to gain new fans with help from its $1 billion marketing budget for 2017. The potential for a blockbuster hasn't been lost on Wall Street. Netflix's stock is setting new highs and even managed to catch an upgrade in the past week from brokerage firm Loop Capital, which believes House of Cards will deliver significant subscriber gains this quarter.

That's a pretty safe bet. When the fourth season launched last year, it helped drive a blowout quarter for the streaming giant as Netflix added 2.23 million new members in the U.S., compared to management's forecast of 1.75 million. CEO Reed Hastings pinned the outperformance on the lineup of exclusive releases led by House of Cards. "Our forecast for the quarter was low," Hastings told investors, "because we underestimated the positive [member] acquisition impact of our major content debuts."

The executive team likely learned their lesson. This time around they're predicting subscriber gains of 3.2 million in the second quarter, which is almost double the growth pace Netflix set in the prior year. But even if the series catches fire and outperforms those high expectations, that doesn't say much about the long-term health of the business. After all, Netflix came in below its growth forecasts last quarter, and the beats and misses will tend to average out over time.

Operating margin is a better metric for investors to watch, since it reflects subscriber growth in the context of content spending and the prices that members are paying for their streaming service. That profitability number has been stuck at about 4% for the past few years, as Netflix plowed every excess dollar into its international expansion. 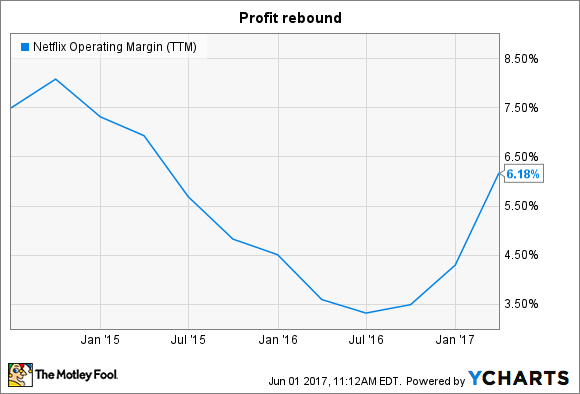 With that push in the past, the company now has the ability to let the figure climb back toward the double-digit level it enjoyed when it was mainly a DVD-by-mail service. Management is targeting operating margin of 7% this year -- close to double last year's result -- and steady expansion beyond that, as new markets mature, and as more of the user base migrates to higher-priced plans.

Also keep an eye on international subscriber gains, which are becoming the main part of Netflix's growth story. Markets outside of the U.S. were responsible for 75% of subscriber gains last year, up from 68% in 2015. Outperformance there made the key difference in the streamer's ability to post another year of accelerating growth. Member additions improved to 19 million in 2016 from 17.3 million. Netflix's first class of markets outside the U.S., including Canada, Latin America, Ireland, and the U.K., has now reached profitability, and the group is posting healthy growth. The latest crop of entries comes with significant challenges, like weak broadband penetration in places and widely differing tastes for local content, but the launches should follow the same basic profit and growth path. Soon, Netflix will count half of its subscriber base as coming from areas outside of the U.S., with plenty of room for that metric to climb toward two-thirds over the next decade.