For years, Under Armour, Inc. (UA 2.49%) (UAA 2.95%) was the sportswear industry upstart, and Adidas (NasdaqOTC: ADDYY) the laggard. Under Armour put together a streak of 26 straight quarters of revenue growth of 20% or better, signed big-name athletes like Steph Curry and Tom Brady, and passed Adidas to become the #2 sportswear brand in the US, behind Nike (NKE).

However, more recently things have changed. Under Armour has fallen into a slump both of its own making and due to outside trends, and Adidas has been resurgent thanks to a renewed push in the U.S., and the popularity of retro footwear styles like the Stan Smith and other Adidas Originals. 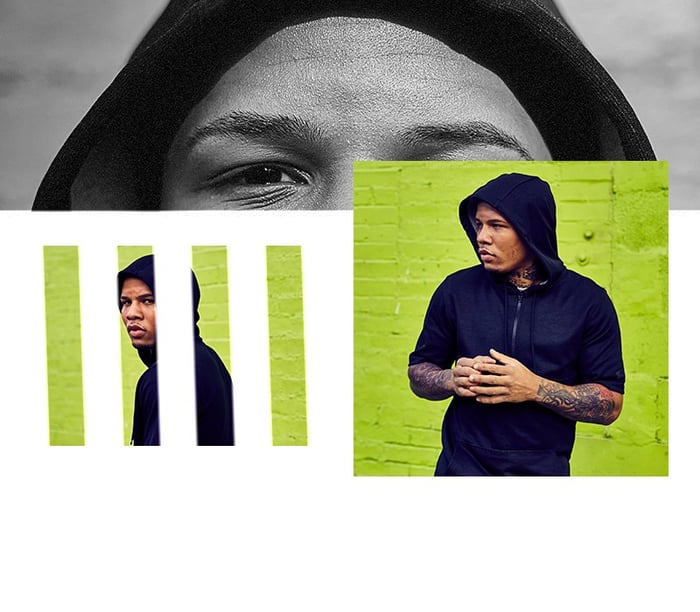 As the chart below shows, Under Armour and Adidas have gone in opposite directions over the past year. 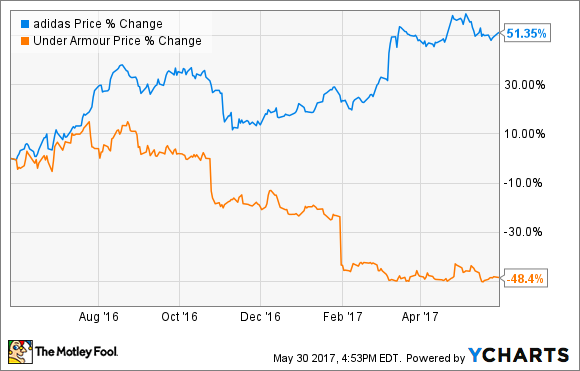 Adidas was the clear winner, but as we've seen, things can change quickly in this industry. Let's take a look at what each stock has to offer to see which one is the better buy today.

Growing pains at Under Armour

Under Armour stock has plunged over the past year as its performance has dramatically worsened. After delivering revenue growth of 20% or more every quarter like clockwork, top-line growth slowed to just 7% in the first quarter, and the company reported its first quarterly loss in its history as a publicly traded company with a loss of a penny per share.

A number of factors have contributed to the stock's demise. Growth in footwear, which is a bigger category than apparel and generates the majority of sales at both Nike and Adidas, has slowed to a virtual halt. In the most recent quarter, footwear sales increased just 2%, after jumping 64% in the quarter the year before. CEO Kevin Plank acknowledged that sales for the Curry 3 shoe had been disappointing in what may have been a style miss for the company.

The bankruptcies of The Sports Authority and other sporting goods chains have also put pressure on Under Armour, as the chain relies more heavily on such distributors than peers such as Adidas and Nike. Recent comments from Plank in support of President Trump also elicited jeers from Curry and some other Under Armour spokespeople, and hurt the company's image among many of its customers at a time when it was already struggling.

After aborting its 2018 goals of $7.5 billion revenue and $800 million in operating income, Under Armour is going through an investment phase, but it won't be easy for the company to get back to 20% revenue growth.

The comeback of a classic

While Under Armour and Nike have both struggled lately, Adidas seems to be winning all of the laurels. The German sportswear giant posted 16% revenue growth in the first quarter, with an 18% increase in Adidas brands sales.

Growth was particularly strong in North America, where sales jumped 31%. Under Armour may be losing sales due to retail closure and its own footwear missteps, but Adidas is riding a fashion wave, as its retro shoes have become popular once again. Last year, the Adidas Superstar was the top-selling shoe in the US, unseating Nike for the first time in more than a decade. Under Armour did not have a single shoe in the top ten.

An increased marketing push, sponsorships with athletes including NBA star James Harden, and a partnership with Kanye West have helped make Adidas a style icon once again.

The company expects growth to moderate for the rest year, calling for full-year revenue growth of 11-13% and operating income growth of 18-20%. However, Adidas is also planning a similar marketing push with the long-neglected Reebok brand, which could help the company continue to claw back market share from Under Armour and Nike.

It's clear that Adidas is in the better position today, as its stock is near an all-time high while Under Armour is trading at a three-year low. But even with all the momentum, the valuation equation still favors Adidas.

On a P/E basis, Adidas is significantly cheaper than Under Armour at a P/E of 32, compared to Under Armour's of 49. Adidas is executing at the top of its game, with EPS likely to grow around 20%. Under Armour, meanwhile, is expected to see its profits contract as it continues to invest in marketing and connected fitness. The Baltimore-based upstart may return to solid growth again, but it's far from guaranteed. Adidas, on the other ahead, is executing on a number of levels, and its shares are still significantly cheaper. It's the better buy today.

Could adidas Be a Millionaire Maker Stock?
405%