Read on to see how these three investment ideas from the IT services industry could fit into your portfolio.

IT services is a thriving industry. Enterprises and small businesses around the world are leaning heavily on high-tech solutions to their business needs and problems, and they often need professional help to set up and then manage the right systems. Market indices and exchange-traded funds tracking this industry have been beating the S&P 500 market barometer hands-down over the last five years.

For investors hoping to tap into the IT services industry in 2017, I put together the three best investment opportunities the sector can offer right now. Read on to see how IBM (IBM -0.04%), EPAM Systems (EPAM -0.80%), and ServiceNow (NOW -0.91%) earned their spots on this short list of top IT services names. 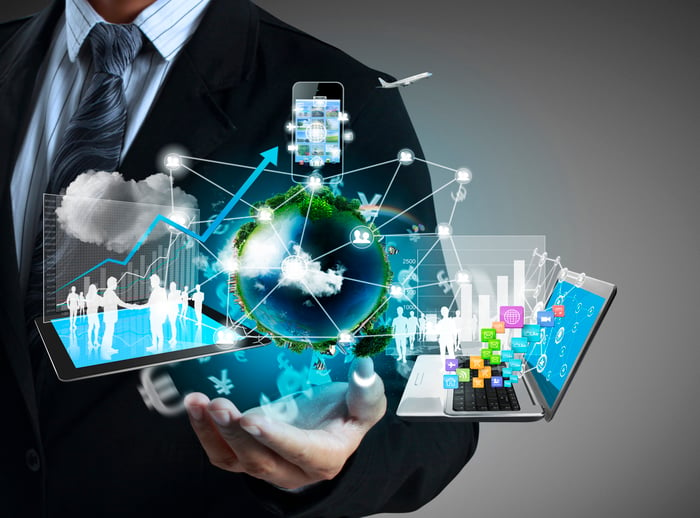 Bargain-bin deals on an evolving veteran

When Ginni Rometty took the CEO office at IBM five years ago, she immediately started taking Big Blue in a new direction. The old one-stop-IT-shop model that had worked so well under her predecessor Sam Palmisano is still being dismantled, In its place, you'll find an IBM with a much sharper focus on a small handful of core business operations.

That process has been drastic in some ways and painfully slow in others, leaving investors to question whether this train is going anywhere. As a result, IBM shares have traded sideways since 2012 while the S&P 500 more than doubled: 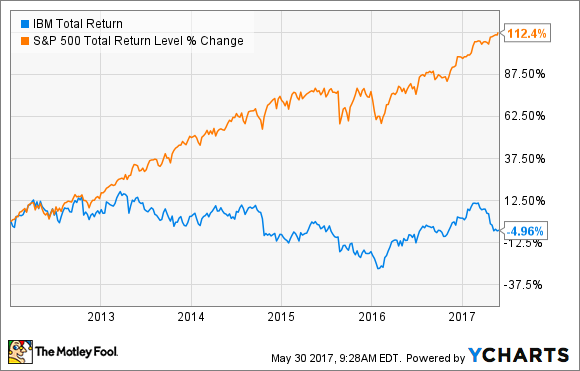 What we have here is an evolving giant, trading at a generous discount to its true value. And the strategic makeover is starting to pay dividends.

In the first quarter of 2017, IBM saw its so-called strategic imperatives deliver 13% revenue growth over the year-ago period, contrasted against an 11% decline in all other sales. Strategic imperatives includes IBM's products and services in the fields of cloud computing, data security, mobility, social media technologies, and data analysis under the Watson umbrella. These operations accounted for 42% of IBM's total sales over the last four quarters -- up from 37% a year earlier -- and will only continue to grow.

That's good news for IBM's revenue growth trends and profit margins in the long run. At the same time, IBM is establishing itself as an early leader in important new markets such as artificial intelligence and cloud-based data analysis.

Management expects several divisions to see a marked sales improvement in the second half of 2017, thanks to some technology service contract signings slipping into the later quarters and an upcoming refresh of Power servers and zSystem mainframes. And while those traditional operations work through their issues, strategic imperatives should continue to deliver strong growth and generous profit margins.

On top of that, Big Blue shares currently come with one of the highest dividend yields its investors have seen since the early 1990s. At 3.9%, IBM's dividend yield sits among the five highest yields among the 30 Dow Jones Industrial Average stocks. Locking in that yield while share prices are low will set you up for even greater long-term gains.

Watch for a short-term stumble, then pounce

If IBM is retooling itself to exploit the cloud computing market, ServiceNow was built from the ground up to live in that market sector.

The company specializes in moving unstructured data collections and workflows onto its cloud-based information sharing platforms. Its products are built around widely accepted industry-standard data protocols, making it easy to drop in ServiceNow's tools as a direct replacement of older and clunkier systems.

ServiceNow always looked like a potential buyout target for larger IT companies like IBM, especially since it was founded by a collection of tech executives coming together to start something new after their former businesses were bought out.

Until that day comes, ServiceNow is doing pretty great on its own. Annual sales have grown sixfold in four years to $1.5 billion, and the share price followed suit with a few drastic drops along the way. 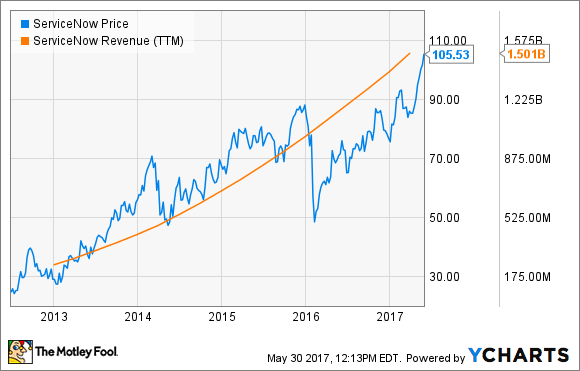 It's safe to say that ServiceNow runs a fundamentally sound business that should be able to withstand the occasional headwind. If the stock looks too expensive for your tastes today, just stock ServiceNow on your watch list and wait for an opportunity to pounce if share prices tumble again for short-sighted reasons.

Acres of growth runway ahead

EPAM Systems is a rising star in the IT services universe. The company has been around since 2002, but didn't joined the public stock market until 2012. In the five years since, EPAM has more than tripled its annual sales and quadrupled free cash flow. Investors enjoyed a sixfold return over the same time span, including a 30% surge in the first five months of 2017.

These massive growth figures are the result of a sprawling global IT services network with over 22,000 software engineers and IT consultants. The company also keeps an itchy trigger finger ready to make quick plug-in deals that expand EPAM's localized services in strategically important markets.

If you're looking for a smaller IT services company with a longer potential runway for growth ahead of it, EPAM delivers that alongside some high-octane growth and quality management. At the very least, this company and stock belongs on your watch list in the IT services space.