Both financially and in a greater sense.

A stock that provides a market-beating return over the long run can be financially life-changing. NVIDIA (NVDA 4.50%), Biogen (BIIB -0.16%), and JPMorgan Chase (JPM 2.76%) all have that potential. NVIDIA and Biogen could also be life-changing in other ways, with new technologies and life-saving drugs. Here's what three of our Foolish contributors think about these stocks.

A growth opportunity for the ages

Tim Green (NVIDIA): NVIDIA is best known for its graphics cards, allowing PC gamers to enjoy incredible visual effects. But the company has long been aiming to use its GPUs in other applications. One area of focus is the automotive industry. NVIDIA's Drive PX platform, essentially a supercomputer for the car, uses machine learning to enable advanced driver assistance features and autonomous driving. Tesla Motors now includes NVIDIA's Drive PX platform in all of its vehicles, and NVIDIA has partnerships with other automakers and Tier 1 suppliers. 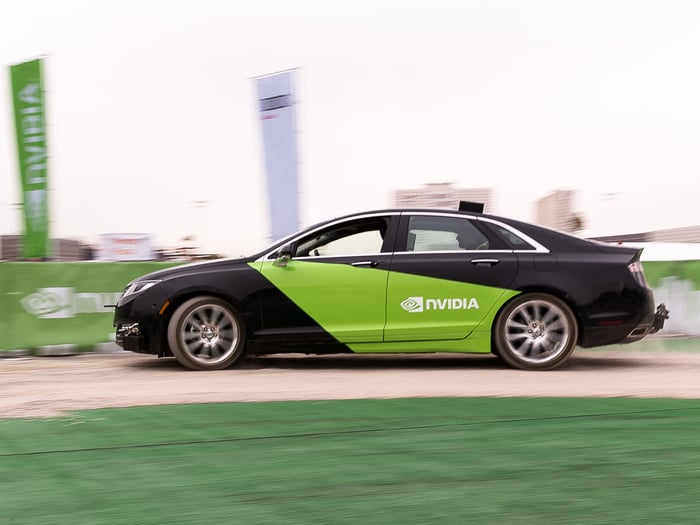 Autonomous vehicles have the potential to bring these numbers close to zero. For NVIDIA shareholders, the automotive business represents one of NVIDIA's great growth opportunities going forward. The business is booming, generating more than $500 million of revenue over the past year and growing at a 24% year-over-year rate during the first quarter. Automotive still represents a small portion of NVIDIA's total revenue, but it has the potential to grow much larger in the coming years.

Keith Speights (Biogen): There's no doubt that Biogen has changed the lives of investors who bought a lot of the stock when it first went public and held on. The biotech's share price has soared over 13,680% since then. However, Biogen has changed and likely will change many more lives -- and not just financially.

Many people across the world who have multiple sclerosis (MS) have had their lives changed by Biogen's drugs. Patients with spinal muscular atrophy (SMA) are just now beginning to experience the effects of Spinraza, a new product marketed by Biogen and originally developed by Ionis Pharmaceuticals . It's the first drug ever approved in the U.S. to treat SMA, a genetic disease that results in progressive, debilitating muscle weakness.

Biogen's aducanumab is one of the most promising experimental Alzheimer's treatments to emerge. The company reported very encouraging results last year from an early stage clinical study of the drug, with some evidence that aducanumab could improve cognition in patients with Alzheimer's disease by targeting amyloid plaques in the brain.

This early stage study provides hope that Biogen's late-stage study of aducanumab could be successful. If so, the world could actually have an effective Alzheimer's disease treatment by 2020. There have other experimental Alzheimer's drugs, though, for which people had high hopes only to see those hopes dashed. If Biogen succeeds, it will certainly benefit investors, but, more importantly, change the lives of millions of patients.

The big bank to buy and hold

Jordan Wathen (JPMorgan): Shares of this bank should be locked away and held for the long haul. Of the largest banks in the United States, I hold JPMorgan in the highest regard as a risk manager and competitor.

The bank is making inroads with consumer and corporate accounts alike. More than 60 million U.S. households have a relationship with JPMorgan in one way or another, from its highly rated credit cards to checking and savings accounts. Its credit card business has grown like a weed, attracting 10.4 million accounts in 2016, a 20% increase from the prior year.

JPMorgan benefits twice on many credit card swipes, as it is as much of a card issuer as it is a payments network (the company licenses Visa's rails to process about $1 trillion of annual payments volume).

Its commercial banking unit is finding similar success in attracting valuable small business clientele. The company had 2,220 middle market clients at the end of 2016, nearly three times as many as it had in 2010. The corporate and investment banking unit has a leading position, grabbing the No. 1 or No. 2 spots by revenue in mergers and acquisitions, equity, and debt capital markets.

Few banks are investing as heavily as JP Morgan for the future. With $1 billion of spending in the last two years to open new branches, improve its digital offerings, and to build out its Chase Pay merchant processing business, JP Morgan is plenty happy to forgo profits today for larger profits tomorrow.

It isn't the kind of stock that will double overnight, but JP Morgan is one of the few banks that I believe has a better-than-average opportunity to compound its investors' wealth at a rate that exceeds the market average for a very long time to come.