The bull market has helped pull shares of many stocks higher, but only a select few have managed to secure the biggest gains in the market. In particular, a handful of stocks have dramatically outpaced the market's major benchmarks, doubling in value in just the past 12 months.

Among that select group, fewer still pay dividends to their shareholders on a regular basis. However, CSX (NASDAQ:CSX), Tronox (NYSE:TROX), and STMicroelectronics (NYSE:STM) have all doubled since June 2016 and also pay respectable dividend yields. Below, you'll see a closer look at them to decide if they have more growth potential in the future. 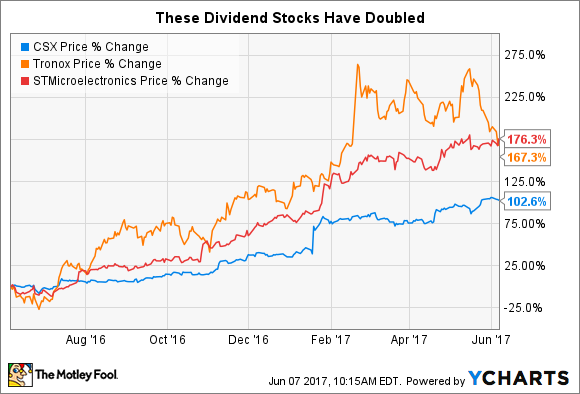 CSX chugs up the mountain

CSX has mounted a nice comeback over the past year, seeing its stock climb by more than 100%. What makes that performance especially impressive is that it has come even as investors have largely been left waiting for the major infrastructure and construction projects that they had hoped would come more quickly in 2017. Many of the industrial companies that would be tapped to make infrastructure improvements rely on commodity shipments from CSX and other railroads, and part of the share-price gains came as shareholders anticipated greater demand.

Nevertheless, CSX has been able to produce gains even in anticipation of those favorable factors. In its most recent quarter, CSX reported impressive sales gains in coal, which has historically put downward pressure on the railroad over the past several years. Shipments of minerals, metals, and equipment were also strong, and all of CSX's various segments saw flat to higher volumes from year-ago levels.

CSX's 1.5% dividend yield isn't huge, but it puts some money in shareholders' pockets quarterly. That should add to any future gains if the railroad industry benefits from future U.S. government investment in the nation's transportation system. 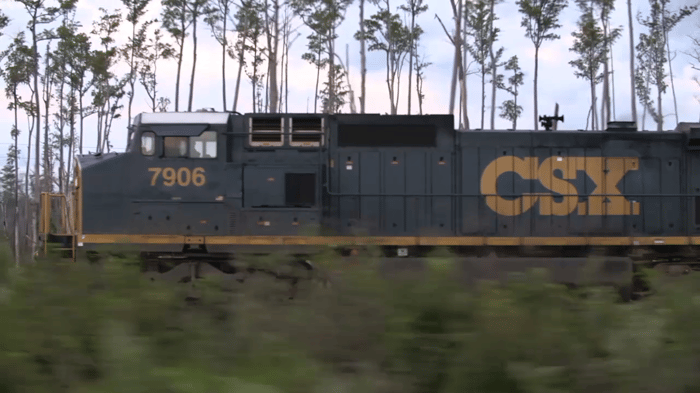 Tronox isn't a household name, but its products are present in many homes. The chemical company makes titanium dioxide, which is an important pigment that goes into many types of paint. After years of poor prices, titanium dioxide began its comeback in 2016, and Tronox benefited from the move.

More recently, Tronox has doubled down on the titanium dioxide industry, selling off its alkali business and, instead, making an acquisition of one of its peers in the pigment market. By doing so, Tronox aims to be the biggest supplier of titanium dioxide in the world. Investors like that idea, and the fact that the stock also pays a modest 1.2% dividend is icing on the cake compared to what they hope will be rising demand for paint pigment in the years to come.

STMicro chips away at the competition

Finally, STMicroelectronics has enjoyed the biggest gains of these three stocks, climbing 176% since June 2016. The major catalyst for STMicro's gains has been the rise of the virtual-reality, augmented0reality, and mixed-reality markets. Investors anticipate that demand for the products that make these markets viable, including gyroscopes and accelerometers that help measure what users are doing with their bodies to integrate those movements into programming content, should lift the prospects for component suppliers like STMicro, which currently yields about 1.5%.

STMicro also has plenty of other growth opportunities. As a provider of chips for the auto, industrial, security, and consumer-electronics spaces, STMicro is benefiting from innovation in all of those industries. Some of its biggest prospects include self-driving cars with fully functional entertainment systems and the greater levels of interconnectedness that the Internet of Things initiative has brought on. With consumers making ever-larger demands for interesting products, STMicro will have its customers scrambling to help them deliver the things that people want.

It's rare for stocks to double in a single year, and few of those that do pay a dividend. Yet STMicro, Tronox, and CSX have all benefited greatly from improving conditions in their respective industries, and they have the capacity to keep moving higher if a favorable environment for investment persists in those areas.