Shareholders of Ford Motor Co. (NYSE:F) are turning their eyes overseas in search of good news after a rocky May and a leadership shakeup at its Dearborn headquarters. Unfortunately, sales in China are off to a slow start during the first half of 2017, but it appears Ford is starting to dig itself out of the hole. Here are the highlights from Ford's May sales data, and where it sits for the year so far.

Ford's sales in China dropped 3% last month compared to May 2016, down to 87,733 units. Of those, 59,276 units came from Changan Ford Automobile (CAF) -- the Ford joint venture that produces the mainstream vehicles we're familiar with in the U.S. market -- for a 12% year-over-year decline. Unfortunately, the EcoSport continues to drag on those results -- sales are down 47% year to date -- which is unfortunate, because it was designed to thrive as a lower-priced SUV in markets such as China. The decline in the CAF results was partially offset by Ford's Jiangling Motors Corp. (JMC) joint venture, which mostly produces commercial vans and other multipurpose vehicles. JMC vehicle sales were up 15% to 22,706 units. 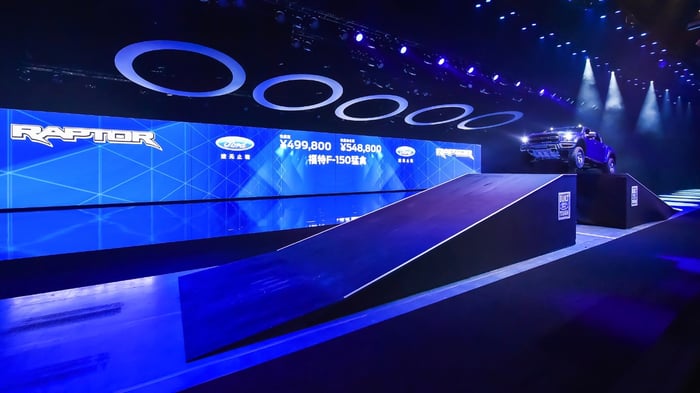 "We remain on track to deliver sales growth in the second quarter. For May, Lincoln and JMC achieved their best May sales result ever," said Peter Fleet, Ford's vice president of marketing, sales, and service for the Asia-Pacific region, in a press release. "We've strengthened our marketing plan in China for the second quarter, with new and exciting customer promotions for Ford-branded vehicles."

Speaking of Lincoln's strong May, let's take a deeper look into that marque's results for the month. Lincoln recorded 4,112 sales in China, a significant 73% jump compared to the prior year. That's a trend that's held true all year, as well, with year-to-date sales doubling compared to 2016. Two main forces are driving Lincoln's surge in China: the MKZ and MKC. Sales of the MKC are up 76% this year to 7,536 units, making it the best-selling Lincoln vehicle in China. Right behind the MKC was the MKZ, which has recorded a 159% increase over the prior year to 5,050 units.

The Lincoln brand has made significant progress in a short time in China -- the brand's first full year on the market there was 2015. And while its progress is encouraging, its year-to-date sales of 20,376 lag well behind those of General Motors' (NYSE:GM) Cadillac brand, which has been sold in China far longer. For comparison's sake, 14,154 Cadillacs were sold in China last month alone, and the brand has recorded more than 67,000 deliveries year to date. Not only is that total impressive, Cadillac is gaining momentum, with its sales up 86% through May compared to the prior year.

Looking forward, investors should hold out hope that Ford can continue to recover from its slow start in China this year, which we'll hear more about during the second-quarter conference call in late July. But the more important factor to watch will be the fate of the company's longer-term efforts to increase sales of higher-margin vehicles, such as the Ranger, which will go on sale in China next year, and the F-150 Raptor, which is currently selling in the country, albeit in low numbers. If Lincoln continues to gain traction, and higher-margin trucks gain some momentum, investors will have reason to smile about Ford's near-term outlook in the world's largest automotive market.