Please ensure Javascript is enabled for purposes of website accessibility
Log In Help Join The Motley Fool
Free Article Join Over 1 Million Premium Members And Get More In-Depth Stock Guidance and Research
By Daniel Miller - May 13, 2017 at 10:26AM

China is the world's largest automotive market, but it's been far less profitable for automakers than the U.S. A new strategy aims to change that.

It's pretty easy to understand the reasons automakers are so energetically vying for larger shares of the Chinese market: In fact, there are 28.2 million reasons. That's the total number of new-vehicle sales Ford Motor Company (F 8.52%) predicts will occur in the world's largest auto market in 2017 -- about 11 million vehicles more than are forecast to be sold in the United States.

However, despite this gap in volume, the U.S. market remains far more lucrative in terms of profits, thanks to Americans' demand for full-size trucks and SUVs. In China, by contrast, consumers lean heavily toward smaller, less profitable vehicles. But if one thing became clear at April's Shanghai International Automobile Industry Exhibition, it's that automakers are looking to open the eyes of Chinese consumers about the virtues of full-size trucks.

Based on what was on display at Auto Shanghai, automakers are going to start pushing more profitable trucks into the Chinese market, and sooner rather than later. However, auto shows are a leading indicator of where the market is probably heading, not an accurate picture of its current state. On the roads of Shanghai, you'd be hard pressed to find a pickup -- a night-and-day contrast to the auto show, which showed off a multitude of new trucks. 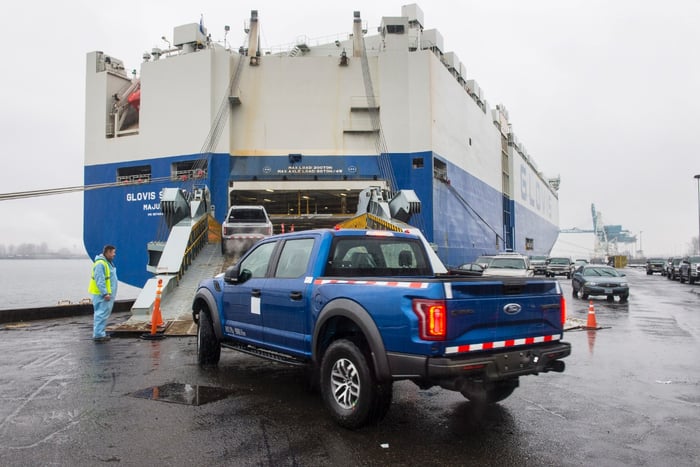 Ford showed off its F-150 Raptor, which went on sale in China just before the auto show with a steep price tag of $72,435, or just under 500,000 yuan. It also introduced consumers to the Ranger, which sells in other overseas markets and could become an everyday vehicle in China's future. Of course, Detroit wasn't solely represented by Ford. General Motors (GM 7.45%) joined the party and showed off its Chevrolet Silverado and Colorado. Here's the kicker: At least 10 Chinese automakers introduced new pickups of their own, which is far more truck brands than we have in the U.S. market.

What's more, these pickups are radically different from the very few pickups Chinese consumers have been buying.

"For years, pickups have been seen as low-end, no-frills vehicles in China that farmers and construction workers use to haul agricultural products and building materials," wrote Yang Jian, managing editor for Automotive News China. "And they carry value-oriented price tags that typically start at 50,000 yuan [about $7,240]."

How much potential is there?

It's fair to question whether or not these more expensive and larger trucks will generate meaningful sales in China, but Ford is optimistic. The company estimates that pickups generate only about 2% of Chinese sales, but due to the country's massive size, that still makes it the fourth-largest truck market in the world -- and one that grew 14% in 2016. That growth rate is even more impressive when you consider that demand for passenger cars, rather than larger vehicles, surged last year thanks to China's vehicle purchase tax being halved from 10% to 5% for vehicles with engines smaller than 1.6 liters.

The increased focus on selling pickups in China is simply to improve margins. General Motors generated $3.4 billion EBIT-adjusted in North America during the first quarter on 940,000 wholesales (when revenue is recorded for automakers). Meanwhile, in China, GM's joint ventures recorded 992,000 wholesales, but generated just $504 million. Ford has a similar story with its Asia-Pacific segment, driven in large part by China. Arguably, the fastest way to close the gap between those profit levels is to sell more trucks and SUVs in China.

Unfortunately for investors hoping for a quick rise in China's profitability, which would certainly add to a bullish thesis for Detroit automakers, there are a couple of factors that might prevent such a scenario. China's pollution problem isn't going away, and it won't be helped by putting more full-size trucks on the road there. Hand-in-hand with that point, China has imposed stringent fuel-economy standards, making it more difficult and expensive for automakers to expand the truck market there.

Investors can expect automakers to push trucks into China, and it could help move the bottom line, but don't expect anywhere near the sales volume or value generated by the U.S. market. There's no magic bullet here, sadly.