TransCanada (NYSE:TRP) is one of the largest pipeline companies in North America, owning several oil and gas pipeline systems across the continent, as well as other energy-related infrastructure assets. However, at its core, it's a natural gas pipeline company that currently controls a 56,900-mile network that supplies more than a quarter of that gas consumed across North America each day.

These gas pipelines also provide the bulk of the company's income each quarter. During the first quarter of 2017, for example, its three gas pipeline segments accounted for 65% of its earnings before interest, taxes, depreciation, and amortization (EBITDA): 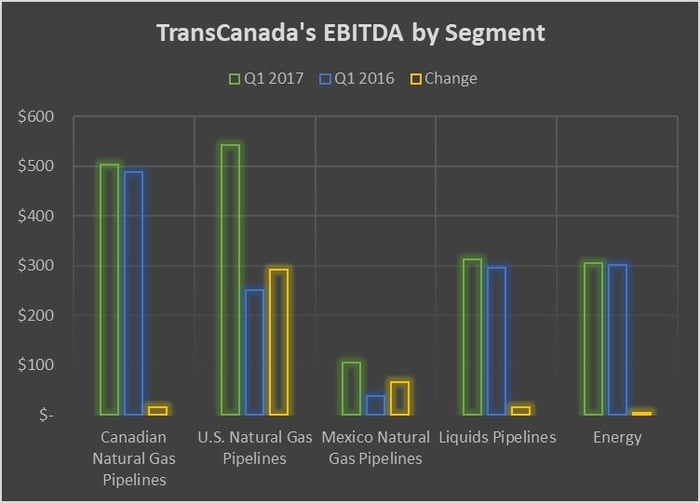 Data Source: TransCanada. Chart by Author. In millions of Canadian dollars, except the U.S. and Mexico segments, which are in U.S. dollars.

Here's a closer look at how each of its natural gas pipeline segments makes money.

The largest earnings contributor last quarter was the U.S. gas pipeline unit, which benefited from the recent acquisition of Columbia Pipeline Group and its associated MLP. That transaction added a slew of assets to the company's U.S. gas pipeline portfolio, including Columbia Gas Transmission, which transports gas from New York State all the way down to the Gulf Coast, earning fees on the volumes its ships.

It's worth noting that the Columbia network represents one of the largest growth drivers in the company's backlog, with $7.1 billion of near-term capital projects in development, including $2.3 billion expected to enter service this year. Because long-term contracts underpin each of these projects, TransCanada should collect a growing stream of steady cash flow as these pipelines start flowing gas.

Another major contributor is TransCanada's legacy ANR Pipeline, which transports gas from production centers in the middle of the country to the upper Midwest, including Chicago. Like Columbia Gas Transmission, TransCanada gets paid a fee to transport these volumes, with those fees regulated by the Federal Energy Regulatory Commission (FERC). The company recently won approval from FERC for new rates on the system, which represent a 34.8% increase from prior rates and will help pay for $837 million of maintenance capital to keep the system operating safely.

In addition to these major systems, TransCanada owns stakes in several other U.S. gas pipelines, some of which it co-owns with its MLP TC Pipelines (NYSE:TCP). In fact, it just recently sold stakes in two more pipelines to TC Pipelines, which will continue to be a strategic source of funding for TransCanada's expansion projects.

TransCanada operates two major Canadian gas pipeline systems, NGTL and the Canadian mainline. The NGTL system gathers three-quarters of the gas produced from the Western Canadian Sedimentary Basin in Alberta and northern British Columbia, and ships it to markets in North America. The company collects fees for gathering this gas and transporting it out of the region.

The other major pipeline system is the Canadian mainline, which moves gas from production basins in western Canada to market centers in the east. The company makes money by signing shippers up to long-term, fee-based contracts for capacity on the system.

For example, earlier this year, the company agreed to new 10-year contracts with several customers at 77 Canadian cents per gigajoule, which is half its normal rate, because it wanted to utilize more of its existing capacity. As a result, higher volumes of gas will flow through the system, which will lead to additional cash flowing into TransCanada's coffers. 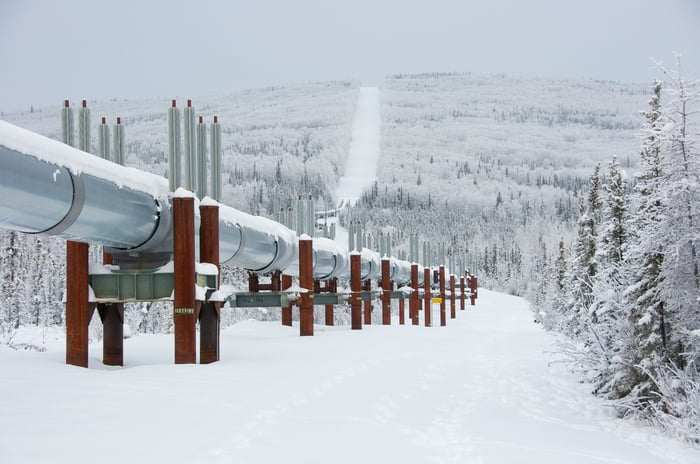 The final leg of TransCanada's gas pipeline trifecta is its growing presence in Mexico, which currently includes four revenue-generating pipelines in the country. In addition to that, the company has three more projects under construction that should enter service next year, including its 60% interest in the Sur de Texas joint venture with Sempra Energy's IEnova subsidiary. Underpinning all these pipelines are long-term contracts with Mexico's state-owned power company, which will provide TransCanada with stable cash flow for years to come.

All of TransCanada's gas pipeline systems have one thing in common, which is that they generate predictable revenue from fee-based contracts or regulated rates. Because of that, the company has a stable base of cash flow that supports both its dividend and growth projects that will increase future cash flow. It's that combination of steady revenue and visible growth that gives TransCanada the confidence that it can grow its dividend 8% to 10% annually through 2020.