A lot of tanker companies reported first-quarter earnings in April. For those that reported in May, the news was not great.

These three companies reported their first-quarter earnings in a bunch midway through May, and while their shares had already been declining in the first half of the month, it was after their reports that they really fell off a cliff.

Navios Maritime Acquisition Corporation went first on May 16 -- reporting a $0.04 per-share Q1 profit that met Wall Street expectations, but was nonetheless 73% below the $0.15 per share that it had earned in the year-ago quarter. Sales declined 20% to $64.5 million.

Teekay and its subsidiary, Teekay Offshore Partners, reported simultaneously two days later. The parent company reported results somewhat better than Navios'. Revenue, for example, declined "only" 15%. On the earnings front, it showed improvement, if not profitability -- moving from a $0.67 per-share loss in Q1 2016 to a $0.53 per-share loss in Q1 2017.

Curiously, while Teekay Offshore Partners suffered the biggest stock losses of the three tanker companies, its revenue declined the least, falling only 10% year over year. Even more curiously, Teekay Offshore was the only one of the three companies to book a profit in the quarter -- $21.3 million -- results that the CEO said "were better than our expectations," despite the company running into a contract dispute. 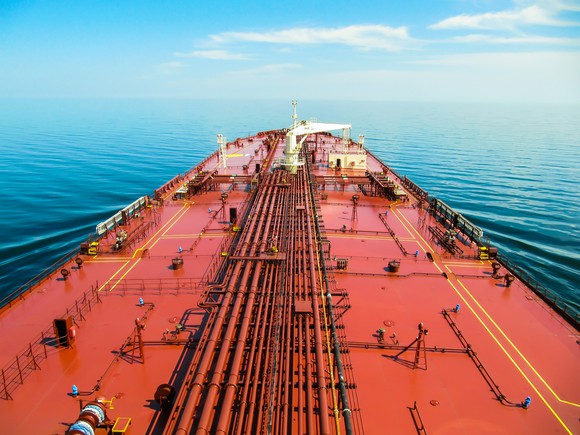 Shareholders in both Teekay and Teekay Offshore Partners will want to keep an eye out for developments regarding their contract dispute with Brazilian oil company Petrobras, which is attempting to terminate a charter for Teekay Offshore's Arendal Spirit "flotel." More generally, the price of oil will determine the companies' future, as higher prices will encourage more customers to lease their vessels -- while lower prices will depress both demand for their vessels and the rates they're able to charge for chartering them.

In this regard, things may begin looking up for both the parent company and the subsidiary. Teekay Offshore noted in its report, for example, that it is enjoying both higher contracts of affreightment fleet utilization and an rise in charter rates -- although admittedly, apparently not enough of either yet to turn a profit.

Meanwhile, at Navios, fleet utilization is holding steady at a high level of 99.8%. The main concern there, it seems, is that the rates Navios is able to charge for its ships are dropping, with time charter equivalent rates falling 14% in Q1 to $19,475.