What do video streaming and coffee have in common?

When someone talks about Netflix (NFLX -0.27%), you might hear it compared with Amazon.com (AMZN -8.43%) or Hulu or cable. But it'd be a big surprise to hear Netflix and Starbucks (SBUX -4.44%) in the same sentence. (Unless the sentence is "I was watching Netflix in Starbucks.")

The two businesses seemingly couldn't have less in common. One slings delicious coffee and whatever a Unicorn Frappucino is made of. The other serves up critically acclaimed originals and a film called Leo the Lion, which one Metafilter user described as "literally the worst thing created by humans as a species." Apparently that Metafilter user never had a Unicorn Frappucino. 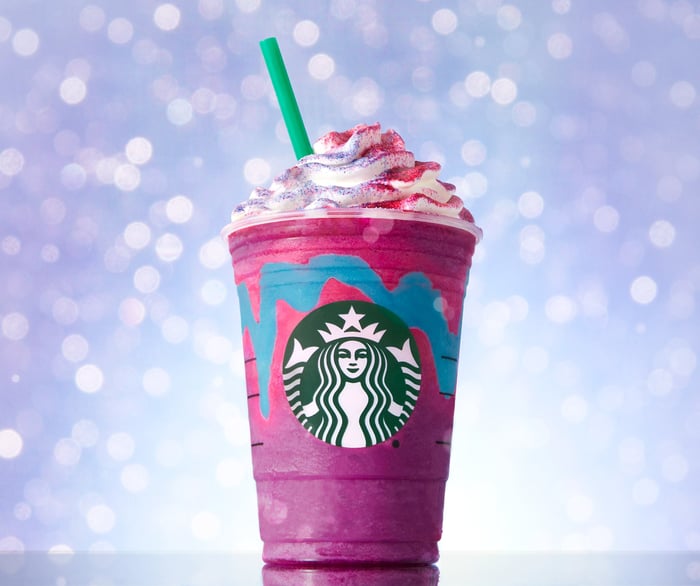 When asked at Re/Code's Code Conference if Netflix would ever get into streaming live sports, CEO Reed Hastings said:

We're not trying to meet all needs. ... What we can be is the "emotional connection" brand, like HBO or Netflix. So think of it as [Amazon's] trying to be Wal-Mart; we're trying to be Starbucks. So, super-focused on one thing that people are very passionate about.

Both Netflix and Starbucks work to differentiate their products.

Starbucks is a leading innovator in the coffeehouse market with its espresso and frappe drinks. It also makes good use of technology to make ordering faster and easier for customers. It also distinguishes itself from large competitors by offering a pleasant environment to sit and drink -- a "third place," as founder Howard Schultz called it.

Likewise, when Hastings was asked about sports, he noted that Netflix can't do anything to add value to what's already available through other channels. It adds value to the television- and film-watching experience by allowing subscribers to binge-watch from the beginning of a series. Subscribers don't have to worry about payments for on-demand video because everything is included in a single monthly subscription. Internet delivery doesn't add anything to the sports-viewing experience.

Amazon, notably, just signed a deal to stream 10 Thursday-night football games this season. The streams will be available exclusively to Prime subscribers, but people in the U.S. can still watch the regular broadcasts on network television -- it's the same content, save a couple of commercials every hour.

But Amazon isn't trying as much to differentiate its content and service from its competitors. It's trying to aggregate the best parts of everything into one service. Netflix can't hope to compete with that -- it doesn't have the money. It can, however, focus on making its on-demand experience better than Amazon's -- and everyone else's, for that matter -- just as Starbucks focuses on making its coffee-drinking experience better than its competition that's often focused on much more than just coffee and pastries.

Netflix and Starbucks are niche products with mass appeal

It's something of an oxymoron, but Netflix and Starbucks are niche products with mass appeal. They cater to consumers who want a premium service. They just happen to have the scale that they're able to charge a very affordable price for their premium products.

Apple's iPhone would be another example of a niche product with mass appeal. It's a luxury item priced at a premium to the market, but it sells over 200 million units per year.

By focusing on what it does best, and not going into things like sports or building movie theaters (the way Amazon's doing with bookstores), Netflix is able to stay ahead of the competition and keep growing subscribers. As soon as Netflix starts doing things outside of its core competencies, that's when investors should worry about the competition.