Despite all the excitement currently in the world of liquefied natural gas, shares of LNG transport companies GasLog Partners (NYSE: GLOP) and Golar LNG Partners (NASDAQ:GMLP) both declined by double-digit percentages in May. Their respective parents -- GasLog (NYSE: GLOG) and Golar LNG (NASDAQ:GLNG) -- dropped 7.2% and 8.7%, respectively, as well.

Three factors most likely drove those declines: GasLog Partners' earnings report, which came out April 27; that company's announcement on May 8 of a new preferred share issuance; and an general oversupply in the market for LNG vessels, which has been pushing down spot charter rates recently.

Let's start off with the easy one: GasLog Partners' earnings. Overall, the company's results were roughly what analysts expected. While revenue did rise slightly, increases in operational costs outpaced revenue growth, leading to lower overall earnings. To make matters worse for current shareholders, management announced its intent to sell redeemable preferred shares. The proceeds of that sale will finance the acquisition of vessels from its parent company. 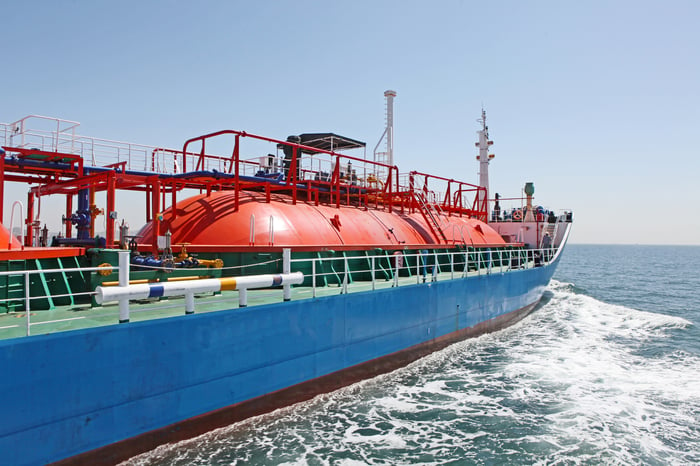 The other thing that likely caused these stocks to drop in May was the operating environment for LNG vessels. While most work on long-term contracts, some are hired out for the occasional spot delivery. According to research group and shipbroker Poten & Partners, there is a surplus of about 20 LNG carrying vessels out there, and that is pushing spot rates lower. This has less of an impact on GasLog Partners or Golar LNG Partners because most of their vessels run on long-term contracts. However, any vessel being signed to a long-term charter today is likely getting a slightly lower rate.

Investing in LNG is an intriguing idea. Growth rates for the LNG trade are well above any others in the fossil fuel industry, and the lower carbon emissions of natural gas suggests it will have a much longer window of use than other fossil fuels. 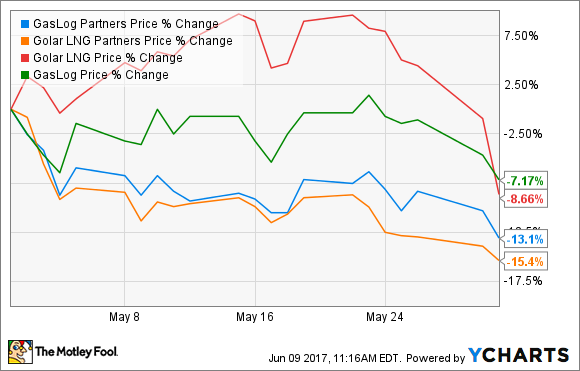 What makes Golar LNG in particular even more intriguing is its investment in floating LNG liquefaction and regasification facilities. Its joint venture with oil services giant Schlumberger aims to offer producers and resource-rich countries a way to monetize their "stranded" natural gas reservoirs -- offshore gas deposits that aren't large enough to justify building stationary LNG terminals. More than 40% of the world's natural gas deposits are classified as stranded, so this is an immense market opportunity just waiting for Golar and Schlumberger to capture it.

One element that should give investors pause when looking at LNG vessel operators, though, is their corporate structure. Both GasLog and Golar have master limited partnerships to which they drop down assets in exchange for cash or additional shares in the partnership. Those partnerships are also raising capital through debt or equity to make those deals happen.

This structure has proven to be a pretty effective way for younger companies to quickly raise cash, develop capital-intense assets, and drop them down to a subsidiary that will operate them under long-term contracts. The downside of this general partner/ limited partner model is that the cost of capital increases over time and inhibits growth. The general partners have incentive distribution rights over the partnerships, which means they get a larger percentage of available cash as per share distributions increase. In other industries, we have seen companies eventually do away with this dual entity structure to lower their cost of capital.

Also, management teams using this kind of corporate structure have been known to be quite cavalier about issuing debt, which can lead to solvency problems and significant payout cuts.

Investors looking at these stocks as possible plays on the LNG market will want to watch how their respective management teams balance the conflicting priorities of growing their fleets, increasing distributions to investors at the partnership level, and maintaining healthy balance sheets. Not many management teams have been able to succeed on all of those fronts simultaneously, so Golar and GasLog would be exceptional if they can do so.