In 2010, Saudi Arabia signed on to the single biggest foreign arms contract in U.S. history, agreeing to buy $90 billion worth of American weapons. Last month, the Saudis upped the ante, securing a deal with President Donald Trump -- who was in town on his first world tour -- to purchase $110 billion worth of U.S. arms.

Granted, considering that it can take years to fulfill a contract after its signing, the truth is that the latest "biggest foreign arms contract in U.S. history" probably covers a lot of the same weapons covered in the last "biggest foreign arms contract in U.S. history." Be that as it may, $110 billion is still an awful lot of money. And the Middle East in general is an awfully good place to be in the weapons business. 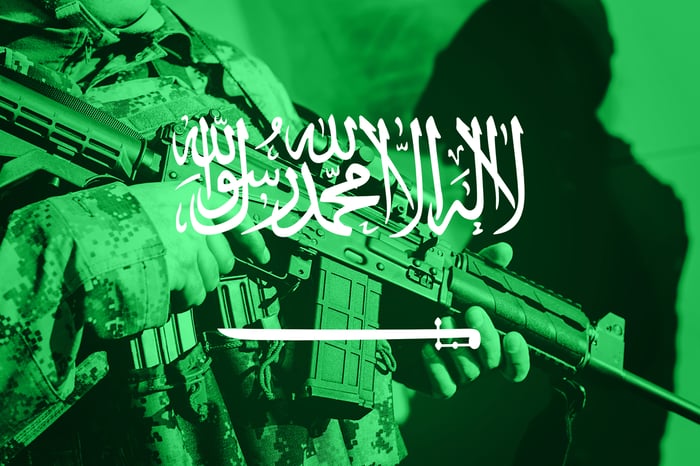 The inscription from the Saudi flag. Image source: Getty Images.

How good is it? Data provided by the Stockholm International Peace Research Institute, or SIPRI, show that from 2007 through 2016, Saudi Arabia alone grew its "military expenditure" by 25%, to $63.7 billion last year. Israel, the next biggest spender in the region, grew spending 20% during the same period. Oman, one of the countries "arming up" fastest in the region, increased defense spending 60%. Meanwhile, Iraq, deep in the throes of its fight against Isis, nearly doubled its weapons spending -- up 98.5%!

Clearly, if you're in the defense business, the Middle East is the place where you want to do business.

Who's who in the Middle East

It's been more than a year since we last checked in on how America's various big defense contractors are doing at capitalizing on this crucial export market. It's high time we take another look, and see if the pole positions have changed. Luckily, all the major players have now filed their full-year fiscal 2016 financial statements, giving us good data on the winners and losers.

Here's how they stack up, based on the latest data from S&P Global Market Intelligence:

What these numbers mean

There are a few broad conclusions we can draw from this data. Most notable is the fact that Raytheon and General Dynamics are increasing their leads in the Middle East. In addition to growing the percentage of their revenues originating there, Raytheon grew its sales to Middle East and North Africa customers by 9% in 2016, while General Dynamics posted a 6% sales gain in the region. In contrast, the recently renamed L3 Technologies is falling behind, with sales to key customer Saudi Arabia declining 21% year over year in 2016.

At the same time, with the U.S. defense budget increasing modestly in 2017, three of these large defense contractors -- L3, Northrop Grumman, and General Dynamics -- are drawing more revenue from Pentagon contracts, reducing their exposure to international markets by 240 basis points, 110 basis points, and 80 basis points, respectively. With President Trump proposing a $54 billion increase in U.S. defense spending in 2018, it will be interesting to see if this trend continues.

One notable exception to this trend is Lockheed Martin. America's largest defense contractor may be increasing its reliance on the Middle East -- or it may not be. Lockheed is less diligent than its rivals in breaking out the sources of its sales by region, so it's hard to be sure. But the 620 basis-point increase in the percentage of its sales drawn from outside U.S. borders in 2016 suggests that Lockheed, too, may be benefiting from the Middle East market. And with 26.9% of its sales now coming from abroad, Lockheed has leapfrogged General Dynamics to take second place on the list of defense contractors enjoying international success in arms sales.

Whether or not the U.S. continues to grow its own defense spending, that's a good place for Lockheed to be.