This June will mark the two-year anniversary of Carl Icahn closing out his Netflix (NASDAQ:NFLX) investment. Lauded by the financial press as a genius trade, let's take a closer look and see what happened behind the scenes and after the media finished covering the story.

Taking to social media, Carl Icahn announced that he had acquired 10% of Netflix, paying an average price of $58.00 per share ($8.29 split adjusted) for a total investment of $321 million. He used both options and direct share purchases to amass his control of 5.5 million shares. Investors cheered the announcement, causing Netflix shares to spike higher on the news and finish the day up 14%.

As it turns out, Icahn credited his son Brett with the idea for the investment, although Dad used his public profile to help boost the share price. Why did Icahn purchase shares?

For proper context, you must remember what was happening to Netflix back in 2012. The company's share price had plummeted from over $300 per share after its disastrous attempt in Sept. 2015 to separate the DVD and streaming services with the formation of Qwikster -- on top of price increases. CEO Reed Hastings would eventually go on to admit the company had made a mistake, dropping the Qwikster idea as a result of uproar from subscribers and investors.

Despite the reversal, Netflix stock lost more than 80% of its value at the time, so when Icahn announced his large stake, this was by no means a "sure thing" investment. But the younger Brett believed that the stock was being punished unfairly for a strategic misstep in the company's rearview mirror. Looking ahead, the future of streaming television was bright, and Netflix was going to play a key role in its development.

As the story goes, Icahn sold half his position the following year against the advice of his son. His initial profit was approximately $825 million.

Meanwhile, Brett and his investment partner David Schechter remained bullish on the company:

Given this opportunity set and the company's management team, which we view as exceedingly competent, we believe Netflix's valuation is still relatively low. In our experience, there are few companies at any given time in history that represent the pure life blood of a colossal secular growth category, and even fewer where the CEO of that company instills deserved confidence among the company's investors by repeatedly exhibiting both vision and the ability to execute on that vision.

In June of 2015, Icahn closed out the remainder of his Netflix holdings. The announcement of the sale came on Twitter, and the business media went into a frenzy. In less than three years, Icahn had made an estimated $1.9 billion from his Netflix position.

The billionaire said he decided to sell his stake based on increased competition and his desire to exit the trade with a big profit on the books. 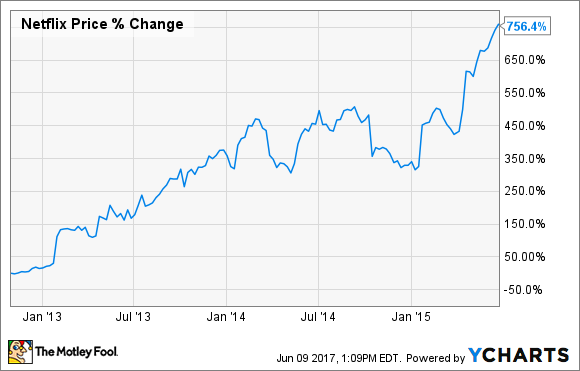 That is where the story ends ... except the bullish run for Netflix stock soldiered on. The company has continued to grow its subscriber count, add content, and expand to almost every country on the planet.

The day Icahn announced that he had officially closed out his position -- June 24, 2015 -- the stock was trading at $96.94 per share (taking into account its 7-for-1 stock split). Two years later, the stock has since gained another 70%. Cue the "I told you so" from Brett.

If Icahn had simply held onto his initial position of 5.5 million shares -- split for 38.5 million -- the stake would be worth about $6.4 billion.

What can we learn from this episode?

Following high-profile investors can be entertaining, but mirroring their every move is not a viable investment strategy -- Fools need to stay focused on long-term stories.

In the case of Carl Icahn and Netflix, the business media may have stopped following the trade, but by digging a bit deeper, investors are reminded of how important it is to let your winners run. For this Wall Street mogul, it meant leaving $4 billion on the table.