These bargains all look appetizing. But please don't drool.

And right now, some of the biggest and best-known companies on the stock market are also some of the lowest P/E stocks on the planet. But are they good values? To find out, I've screened the NYSE in search of large-cap, blue chip companies. Focusing exclusively on the top 10 (or maybe "bottom 10" is more accurate) deep-value "bargains," I've come up with three stock ideas that might be worth buying.

Here they are for your review -- three of the lowest P/E stocks today. 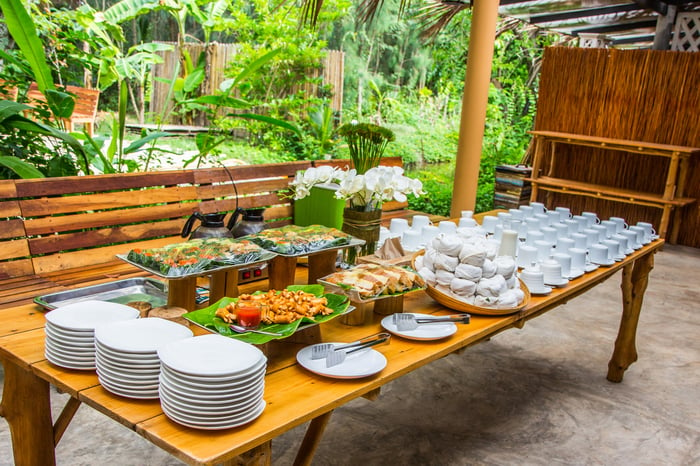 Today, for your investing pleasure, we offer up a Warren "Buffet" of low P/E stocks. Image source: Getty Images.

Priced at a low 7.1 times earnings, Vale S.A. (VALE -0.80%) isn't the cheapest stock on the market today -- but it's pretty close, and it is one of the 10 cheapest large-cap stocks listed on the NYSE.

Now, there are reasons for this. For one thing, questions regarding the health of China's economy have big implications for Vale's business of mining (and exporting) iron ore and coal to Chinese factories. For another, Brazilian authorities have sued Vale over its role in the 2015 Samarco mine disaster in that country.

However, at last report that lawsuit was being suspended and a settlement was being worked out, which suggests that the danger to Vale stock now is not as great as it once was.

The good news is that this "bad" news has Vale stock trading at a cheap P/E -- possibly too cheap, given analyst projections for Vale to enjoy a near-15% long term annual earnings growth rate, and given the stock's high quality of earnings and strong free cash flow. Throw in a strong 3.9% dividend rate as a bonus, and Vale looks like the kind of value stock that pays investors handsomely while they wait to see its P/E expand.

For its part, Fiat Chrysler (FCAU) owes its low P/E (7.7 times earnings in this case) to a different problem -- namely, that years into a bull market for automakers, the car-buying cycle appears to have finally reached its peak and begun heading back down.

Last month, Fiat Chrysler turned out to be one of the worst performers among major automakers, reporting a sales decline of 1% compared to May 2016. (Only General Motors' numbers were worse, while half the big automakers reporting sales figures saw their number increase.) Still, people say that car-buying comes in cycles for a reason, and what's going down today will eventually go back up.

Despite sales declines, analysts who track Fiat Chrysler's fortunes expect to see the company grow its profits this year -- and next year, too. In fact, S&P Global Market Intelligence forecasts show Fiat Chrysler averaging a 19% annual earnings increase over the next five years. And already, Fiat Chrysler is reporting much stronger free cash flow ($5.1 billion over the past 12 months) than its reported earnings ($2.1 billion) suggest.

Unlike Vale, Fiat pays its shareholders no dividend. But with its expected growth rate in the high teens, investors shouldn't need a dividend to profit mightily from this ultra-low-P/E stock.

Turning our gaze now to the tech industry: While it may seem that everybody and his brother already has more flat-screen TVs, laptops, tablets, and smartphones than they need, analysts still see LCD-glass maker Corning (GLW -1.11%) growing its earnings at a respectable 8% clip over the next five years. That may not be as barn-burning a pace as Fiat Chrysler (or Vale) is setting. But 8% growth should be plenty to justify Corning's low 8.0 P/E ratio -- especially with Corning supplementing that earnings growth with a tidy 2.1% dividend yield.

Will Corning deliver the growth that analysts are expecting? Fellow Fool Steve Symington laid out the facts for us earlier this month, describing how Corning's glass sales grew only "modestly" last quarter, but how the drastic drops in glass prices of recent years have "moderated" as well, making it easier for Corning to maintain earnings growth even without strong sales growth.

My hunch: With a low price-to-earnings ratio and a strong balance sheet featuring nearly $1 billion more cash than debt, Corning stock is going to work out just fine for investors.

Why Shares in Corning Soared Nearly 15% This Week
405%