Which name comes out ahead in the showdown of online advertising titan?

Facebook (META -1.19%) and Google -- now part of parent company Alphabet (GOOG -3.29%) (GOOGL -2.75%) -- are perhaps to the two most powerful internet companies in the world today. Only Amazon.com could make a similar claim of dominance.

As two of the most visited websites in the world,  Facebook and Google capture the majority of online advertising spending, and each produces billions in profits every quarter. However, if you could only own one of these two stocks, which would it be? Let's assess Facebook and Google through a three-part framework that examines critical aspects of the companies' investment prospects.

Facebook and Google each enjoy deep and sturdy financial foundations. Take a look at these four common measures of solvency and liquidity:

That said, Google stands far above Facebook in terms of its net-cash balance and cash-flow generation. Their near-term liquidity metrics are large enough to be immaterial for this analysis. Their bank accounts are like Jupiter and Saturn: They're both massive, but one is still larger than the other.

As the two companies at the forefront at the digital revolution in advertising, Google and Facebook enjoy meaningful competitive advantages. In fact, the two loom so large within this growth market that Forbes has referred to them as a duopoly.

Though they compete in the same digital-advertising market, they have come to dominate different large-scale verticals within the space. For example, recent data from research firm eMarketer predicted that Alphabet's Google search engine will increase its share of the U.S. search ad market to 78% this year, primarily thanks to Alphabet's ubiquity in mobile search. 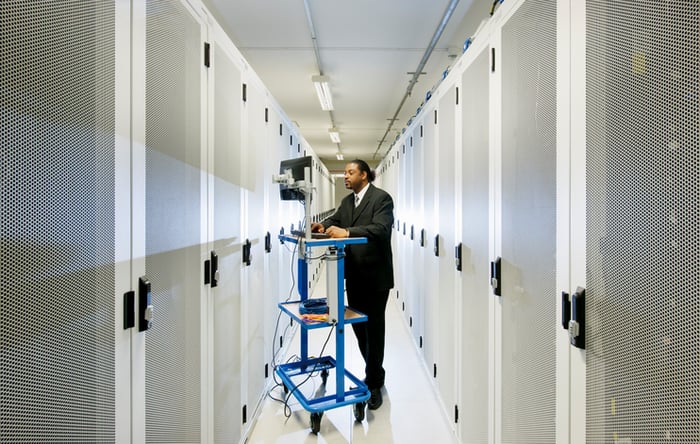 In the same report, eMarketer also predicts that Facebook's share of the U.S. digital display market will grow by 32% this year, to a total market share of 39%, stealing share from Alphabet, Twitter, and Yahoo! in the process.  Of course, the eMarketer data applies only to the United States, but as the most popular search engine and social network in the world, this general market dynamic holds worldwide -- save for China, where both are blocked -- even if the exact numbers aren't the same.

Further extending their similarities, Facebook and Alphabet each continue to invest heavily to remain at the top of the constantly changing global technology industry. Both see major social and financial opportunities in inventing solutions to connect the remaining 4 billion people without Internet access. Both have spent heavily to advance their capabilities in artificial intelligence, augmented and virtual reality, and much more.

As the two most powerful companies online today, it's difficult to say which one enjoys the more robust competitive advantages, so let's call this section a tie and move on.

The strength of their businesses means Google and Facebook trade at premium valuations relative to the rest of the stock market. Here's a snapshot of three commonly used valuation metrics for the two companies:

As we've seen, the long-term growth tailwinds powering Facebook and Alphabet make it very likely that both companies will grow at above-average rates for years to come. Viewed this way, Facebook and Google shares are classic examples of growth stocks. The companies may not appear to be obvious values today, but their potent long-term growth trajectories make them strong candidates to grow into and beyond levels captured by their near-term valuations. To me, this is by far the most important takeaway from this discussion of valuations, so let's also call this section a tie.

Edging Facebook out in terms of its financial resources, Google could be given the win here. However, that would gloss over the more substantive investment takeaway. Collectively, Facebook and Google represent the new guard of the internet. As such, they both should be viewed as core stocks in any interested tech investor's portfolio.