Please ensure Javascript is enabled for purposes of website accessibility
Log In Help Join The Motley Fool
Free Article Join Over 1 Million Premium Members And Get More In-Depth Stock Guidance and Research
By Demitri Kalogeropoulos - Jun 14, 2017 at 10:00AM

Here's how the retailer's success story could unravel.

It's easy to find reasons to be bullish about Home Depot (HD 1.35%). To name just a few, the home improvement giant has been soaking up market share for years while boosting its profitability and building an e-commerce business that's the envy of its retailing peers.

I'm a long-term shareholder, and I see a decent chance that the company will continue its winning ways over the next decade. If the business stumbles, though, here's how I see the bear case playing out.

Home Depot managed the exact same market-thumping revenue growth pace last year that it did in 2015. Its 5.6% comparable-store sales gain trounced the 4.8% boost at rival Lowe's (LOW 2.12%) to mark another solid year of share gains for the industry leader. 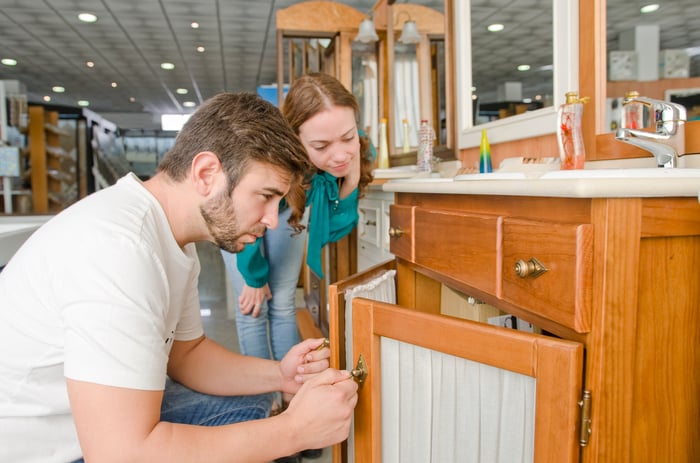 But look deeper into the comps figure and you'll see a worrying sign. Customer traffic growth dove from 4.1% the prior year to 2.9% in 2016. The trend continued into 2017, too, with traffic gains falling below 2% in the most recent quarter.

Home Depot has managed to offset the traffic slowdown by boosting average spending. Its professional customer segment is leading the way higher and helping big-ticket transactions -- those totaling over $900 -- rise at a 16% pace recently. If traffic growth keeps declining or turns negative, though, the professional niche won't be strong enough to keep sales rising, and Home Depot's momentum will stall.

Investments in the e-commerce sales channel are paying significant dividends for Home Depot. It owns one of the biggest online retailing sites in the country and has done a better job than rivals at connecting that channel with its physical stores. In fact, many e-commerce orders today involve a trip to a Home Depot store for the shopper, which helps lift both digital and traditional sales. The online business grew at a market-beating 23% last quarter and is worth 6% of Home Depot's overall business. 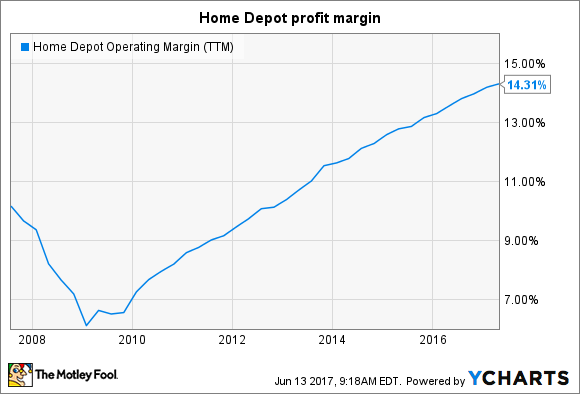 Yet there's a growing risk that the company will have to sacrifice its impressive profit margins to continue winning in the online space. Now that customers can order online and have their products shipped directly from their local store, for example, they might opt out of visiting a Home Depot location. Increased competition might force generous shipping and pricing terms, too. Thus, as e-commerce grows to a greater share of the business, the retailer's profit margin expansion -- net margin jumped to 8.4% in 2016 from 7.5% in 2014 -- could end.

Home Depot's management team has an unusually aggressive capital allocation posture that might come back to haunt shareholders. Rather than the conservative 35% of earnings that Lowe's promises in a dividend payout, for example, Home Depot's target is 55%. The retailer hasn't been shy with taking out loans, either, as its debt level is over $22 billion, compared to $9 billion in 2011. Home Depot has spent $7 billion in each of the last three years on stock buybacks, as well, translating into about 90% of earnings in 2016.

The good news is that these bold financial moves have helped make the company one of the most efficient on the market. Yet they also expose the retailer to more risk. Home Depot had to pause its dividend raises during the worst of the housing crisis even as Lowe's kept its raises going. Another downturn might similarly catch Home Depot by surprise and lead to a period of below-average financial returns for its shareholders.