Jaguar plans to put its all-electric I-PACE into production later this year. Here's what we know about it.

Tesla's (TSLA 0.91%) fans and foes have been waiting years for the big automakers to step up to the challenge put forth by CEO Elon Musk: To start building great electric vehicles that will give Tesla some serious competition.

A few automakers are known to be working on long-range premium electric vehicles that could rival Tesla's (and a few more may be doing so in secret). But as of right now, it looks like the first vehicle to give Tesla some serious competition will wear a Jaguar badge when it begins arriving at dealers later this year.

The vehicle you see here is called the Jaguar I-PACE Concept. It's a show car, but it's said to be very close to the model Jaguar plans to put into production. Jaguar first revealed it at the Los Angeles International Auto Show last November.

Like Tesla's Model X, the I-PACE (which might end up being its name) is sort of a cross between an SUV and a luxury sports sedan -- an in-between vehicle that takes advantage of the packaging possibilities of its electric drivetrain. It was designed from the ground up (by Jaguar's vaunted design chief, Ian Callum) as an electric vehicle. 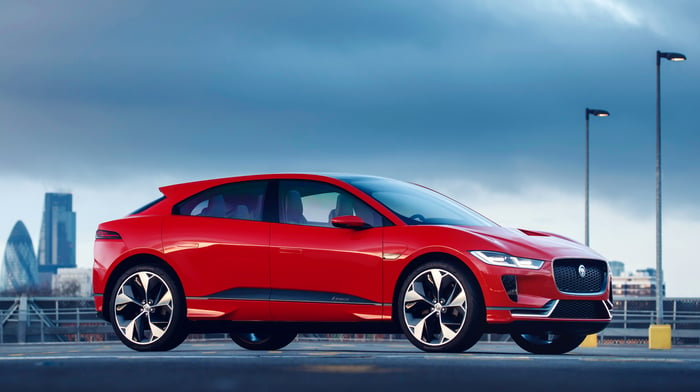 What do we know about the upcoming Jaguar I-PACE?

Jaguar, which like its corporate sibling Land Rover is owned by India's Tata Motors (TTM), hasn't told us much about the production version yet. But we know it's all-electric with a dual-motor, all-wheel-drive drivetrain that was developed by Jaguar in-house. The I-PACE's battery cells will be made by LG Chem (NASDAQOTH: LGCLF), probably in the factory LG will soon open in Poland.

The Concept had a 90 kilowatt-hour battery pack that Jaguar said would enable a rated range of "over" 220 miles on the U.S. Environmental Protection Agency's testing cycle. That's not bad, but it's not quite competitive with the higher-end Teslas. It's possible the production version will do better. Inside, the Concept had some show-car touches but looked mostly like its was intended for mass production, so it's probably safe to expect that the production I-PACE's interior will look similar. It's quite roomy for its size, taking advantage of the flat floor and "cab forward" shape to seat four adults in comfort. Trim is as you'd expect in a Jaguar, albeit a futuristic one: Good leather, dark wood, and a driver-focused dashboard. On the road, it's probably safe to expect that the production I-PACE will share the virtues of other recent Jaguars, with a quiet interior and suspension tuning that offers both a smooth ride and nimble handling (traditionally a difficult compromise, but one Jaguar has often managed.)

It's also safe to expect that -- at least in top-tier versions -- its acceleration will give Tesla's "Ludicrous Mode" a run for its money.

Recharging? The I-PACE will be compatible with fast-chargers that use the DC Fast standard, Jaguar has said. DC Fast isn't quite as fast as Tesla's Superchargers now, but faster chargers are on the way.

When will the I-PACE go into production?

Production is expected to start soon -- within a few months. The first production versions will go to dealers in Europe and should arrive by the end of the year. Jaguar plans to roll it out here in the United States next year.

But there's an interesting twist: Jaguar won't built the I-PACE in its own U.K. factory. Instead, it has hired contract manufacturer Magna Steyr to build it. Magna Steyr is the contract-manufacturing unit of industry supplier Magna International (MGA -0.83%). It added a new "body shop" section to its Austrian factory in order to build the I-PACE. 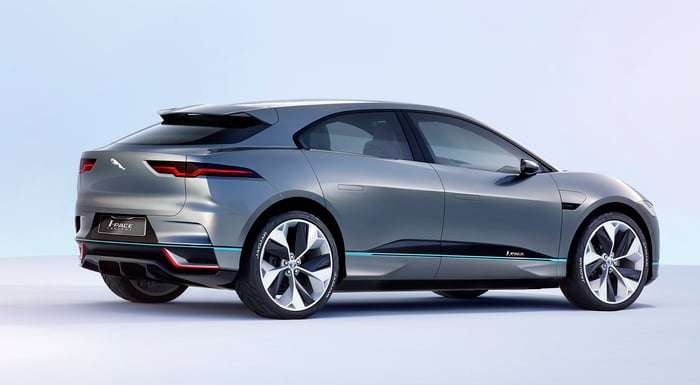 The new factory section was needed because the I-PACE has aluminum body panels and requires different construction techniques and tooling than steel-bodied vehicles. Magna Steyr got involved in the development of the I-PACE early on and helped Jaguar take manufacturing considerations into account as it designed and engineered the vehicle.

Magna Steyr has extensive experience building vehicles for brands like Porsche, Mercedes-Benz, BMW, Aston Martin, and other prominent names. It should do a fine job with the first electric Jaguar.

How much will the Jaguar I-PACE cost?

We don't know yet. The Model X starts at $82,500 before tax credits; I won't be surprised if the I-PACE's base price is a bit lower, but we'll have to wait to be sure.

If it's priced right and has competitive specs, it should sell quite well -- but probably not in Tesla-like numbers. Compared to the German luxury giants, which sell in the millions every year, Jaguar is a small player: It sold just 148,730 vehicles (of all kinds) globally in 2016. And even if huge demand materialized, I suspect Magna Steyr's factory isn't set up to build hundreds of thousands of I-PACEs.

Still, if its specs are even close to competitive with the Model X's, I'm confident that the I-PACE will find plenty of buyers, at least by Jaguar standards. It's gorgeous, it's distinctive, it should have a terrific interior (a Tesla weak point), and in terms of ride, handling, interior noise, and overall fit and finish, it should compare well with the Tesla.

We'll know a lot more once the first reviewers get a chance to drive the production version of the I-PACE -- hopefully soon.