There are reasons to think other drugmakers might see Mallinckrodt, Tesaro, and Incyte as tempting acquisitions, which makes them potential opportunities for risk-tolerant investors.

Biotech firms Mallinckrodt PLC (MNK), Tesaro Inc. (NASDAQ: TSRO), and Incyte Corp. (INCY -0.36%) could all be M&A targets, and if buyers appear for them, owning their shares could pay off. However, these are risky stocks, and there's no guarantee that deals are coming. Are they right for your portfolio? Here's what you need to know.

First up is Mallinckrodt, the much-maligned generic drug and specialty drug manufacturer. Shares have fallen over 40% this year, and the decline is prompting the company's board of directors to consider their options. 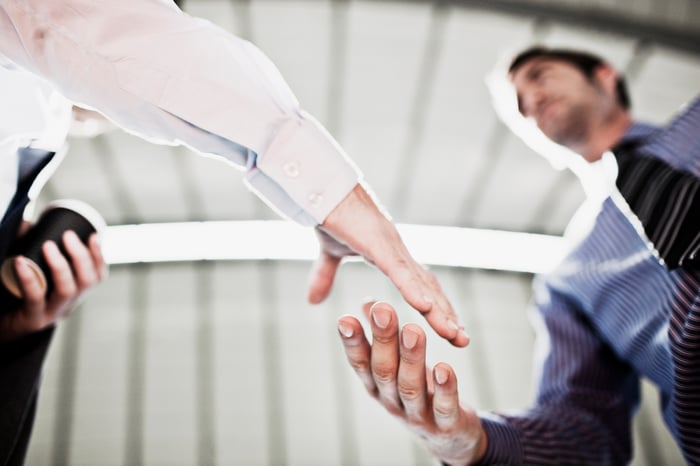 The company is best known for generic opioid medications for pain, and the ultra-overpriced H.P. Acthar Gel, a decades-old treatment for rare autoimmune conditions. Unfortunately for management, demand for those products has seen better days.

Opioid prescriptions are falling dramatically as concern mounts over their abuse, and recently, the FDA recommended the removal from the market of rival Endo International's opioid drug Opana ER. The decline in prescriptions for opioids was largely to blame for a nearly 9% year-over-year drop in Mallinckrodt's generic drug business.

Unlike opioid revenue, sales of Acthar Gel are still growing, but growth is slowing, and its status as one of the world's costliest medicines has put Mallinckrodt in the hot seat as payers push back against runaway drug prices. Though the drug has been on the market for decades, Acthar Gel's price per vial -- just $40 in 2001 when it was acquired by Questcor, which itself was later bought by Mallinckrodt -- is now 950 times that, at $38,000.

There are risks aplenty here, but that doesn't mean private equity wouldn't be willing to buy this company -- at the right price. It was still bringing in sales at a $3.6 billion annualized clip exiting Q1, and if a cash infusion was used to eliminate its debt and fund R&D, its profitability could benefit.

It's anyone guess, however, what price would be fair for Mallinckrodt considering those risks, and for that reason, it could be the chanciest of these three companies to invest in.

Lonnie Moulder made a splash when he sold MGI Pharma for $3.9 billion in 2007. Now, Moulder's at it again at Tesaro, a cancer-drug company that has launched two products since 2015.

Tesaro markets Varubi, a long-lasting drug to treat chemotherapy induced nausea and vomiting (CINV), and this year, it won FDA approval for Zejula, a next-generation treatment for ovarian cancer.

Varubi's sales are a trickle, but it sells into a billion-dollar market, and its market share could climb if the FDA approves an IV formulation of it later this year. Its closest competitor is arguably Emend, a drug that generated $133 million in first-quarter sales. Since Emend was developed by his old company, MGI Pharma, Moulder knows a thing or two about the indication, so investors might not want to count Varubi's peak sales potential out just yet.

Zejula is the company's crown jewel, however. A PARP inhibitor, Zejula became the first drug in its class to win FDA approval in ovarian cancer patients regardless of their BRCA mutation status. Zejula competes against Lynparza, which had sales of $57 million in Q1, and Rubraca, which had sales of $7 million in Q1 (its first quarter on the market). Zejula's sales could significantly eclipse those of its rivals, because those drugs can only be used in BRCA positive patients, who amount to only 15% to 20% of all ovarian cancer patients.

Assuming Zejula trials expand its use to even earlier in this indication, it could rack up hundreds of millions of dollars in annual sales. Revenue could benefit from a positive performance in trials evaluating it as a  breast cancer treatment, too.

A Tesaro acquirer would also nab its new PD-1 checkpoint inhibitor. Studies evaluating it are underway, and if successful, it could compete in a multibillion-dollar market for this class of drugs.

Because Tesaro's already got two FDA-approved drugs on the market, and the sales opportunities for them could be big, industry watchers think a M&A deal could value the company at $10 billion. Given its market cap of about $7.5 billion today, a deal at that price would be a nice payday.

Incyte Corp. is developing epacadostat, an IDO-inhibitor that disables cancer's ability to use the IDO protein to suppress the immune system.

Epacadostat isn't FDA approved yet, but it's shown promising results in clinical trials, and that has folks thinking IDO-inhibitors could be the next big thing in cancer treatment. Studies evaluating its use alongside Merck & Co.'s Keytruda in melanoma and lung cancer are particularly encouraging.

In a small, early-stage melanoma study, the objective response rate (ORR) was 58% and the disease control rate was 74%. That's pretty good considering that Keytruda won FDA approval as a monotherapy in this indication after delivering an ORR of 33%. In non-small cell lung cancer, pairing up epacadostat with Keytruda boosted objective response rates into the mid-30% range. For comparison, the ORR on Keytruda monotherapy is below 20%.

Incyte is already conducting a pivotal trial for epacadostat and Keytruda in melanoma, and results are anticipated in 2018. Various trials that could expand epacadostat's addressable patient population will provide a steady stream of data beyond that.

The use of epacadostat plus PD-1 could become a standard of care, so peak sales for it could be substantial. In Q1, the two best selling PD-1 drugs were Opdivo and Keytruda, and their sales were $1.1 billion and $584 million, respectively.

Any acquirer would would also get Incyte's Jakafi, a fast-growing drug that's used to treat myelofibrosis and polycythemia vera. Jakafi's sales were $251 million in the first quarter, putting it on pace to achieve billion-dollar blockbuster status this year. A pivotal study evaluating it in graft-versus-host disease and thrombocythemia are beginning soon, so sales could continue to grow from here.

Because epacadostat has a lot of potential and Jakafi's already hauling in big money, this may be the most intriguing of these three take-out stocks. Unfortunately, its shares aren't selling at a cheap valuation, and with a market cap of around $25 billion, it may simply be too richly priced for anyone to buy, at least until epacadostat proves it can secure FDA approval.