Two of the world's most valuable brands will merge strengths to sharply challenge competitors in the U.S. grocery market.

Activist investor Jana Partners is presumably ecstatic, and judging by their stock prices, one can guess that major grocery industry chains are left feeling bludgeoned by the announcement that Amazon (AMZN 2.07%) is scooping up natural and organic foods pioneer Whole Foods Market (WFM) for $13.7 billion in cash.

Perhaps not the most intuitive of business combinations, the deal represents a potentially tremendous unlocking of value, and at a pace which well suits the current management team. According to the joint press release issued today, CEO John Mackey will continue to run Whole Foods. This signals that, at least in the near term, Amazon isn't out to make drastic changes to Whole Foods' business model. But significant evolution is certainly on the horizon. Below, let's walk through the implications of the merger.

A transaction Amazon shareholders should applaud 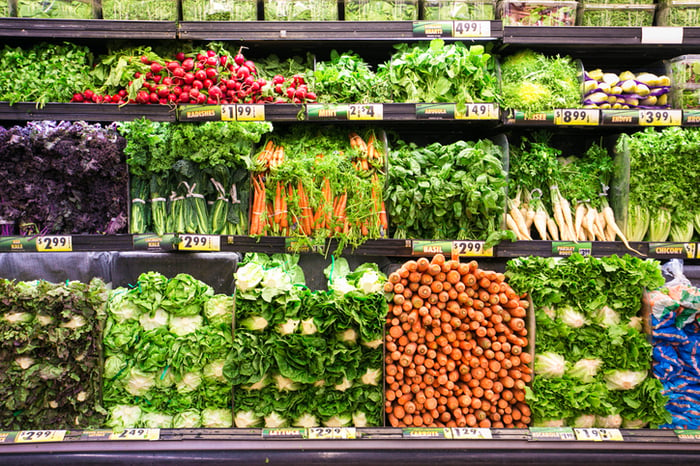 Forget for a moment what this deal means to Amazon's grocery ambitions. Investors should note that the acquisition represents an extremely efficient use of Amazon's capital.

Despite fierce encroachment on its market share by all comers over the last several years, Whole Foods still generated a net profit margin of 3.2% on its $15.7 billion in sales in fiscal 2016.

That's well above the overall grocery industry's average profit margin, which hovers between 1% to 1.5%, and above Amazon's own profit margin last year of 1.7%.

As of its most recent quarter end, Amazon held nearly $26 billion of cash and marketable securities on its balance sheet. So the online retailer is employing its idle resources in an acquisition which exceeds its own historical internal rate of return, and also opens up access to a market it has long wanted to disrupt.

Now, by supplying Whole Foods with its logistics, distribution, and automation expertise, it's conceivable that Amazon can help push the chain's profit margin slightly past its peak profitability in the last decade of 4.5%.

Amazon will also likely be able to enhance Whole Foods' digital platform with its own online technology to boost incremental sales. And it will certainly supplement the grocer's top-line by dispensing with Whole Foods' fledgling delivery relationship with Instacart, in favor of its own Prime Now grocery delivery service.

With its deep pockets, and multiple tools to improve operations and lift traffic, Amazon is the perhaps the most strategic buyer Whole Foods could hope for. But Amazon will also reap an ever-growing yearly profit contribution from the purchase: Last year, Whole Foods generated an impressive $1.4 billion of EBITDA on its nearly $16 billion in sales.

A boost to both value and premium strategies

Whole Foods' "365" value concept has seen only a handful of locations developed over the last year, as management has taken care to remain in improvement mode before opening stores in earnest. But under Amazon's ownership, we're likely to see a much more rapid expansion of this "capital light" version of a normal Whole Foods venue.

The 365 stores carry a higher proportion of private label goods, and a leaner labor component than sister stores. They're ripe for experimentation which Amazon can facilitate, from diminishing human touches of inventory from the loading dock to the shelf, to investment in multiple cold-storage warehouse and distribution centers.

Notably, Whole Foods has an opportunity to stack its 365 locations in dense urban areas, where foot traffic is high, but delivery opportunities through Prime Now also abound.

Whole Foods' larger flagship stores will also benefit from Amazon's technological prowess. But don't expect wide-scale changes to the model which full-size locations operate under. Amazon certainly understands that despite the decline in Whole Foods' revenue growth, its margins are impeccable, and it boasted 2016 sales of an incredible $915 per square foot.

Rather, Amazon will find specific efficiencies which will enable Whole Foods to "give" some pricing as it protects its market share. And that must be a unsettling thought for Whole Foods' competitors, who have been pinching the grocer's market share by cutting the margins on their own organic products to the bone.

For the last two years, Whole Foods has operated under a shadow, as comparable store sales growth has flatlined. This deal brings the Whole Foods brand back under sunlight. Simply, Jeff Bezos grasps that the intrinsic value of the company, that is, the discounted value of its future cash flows when you consider both tangible and intangible assets, is much higher than the market realizes, particularly when combined with Amazon's strengths.

Let's go back to that 1% to 1.5% which conventional grocers expect as annual net profit in a good year. It's perhaps folly to think that Amazon should avoid wading into this space given the lack of available margin. Rather, the grocery industry -- worth $800 billion annually according to Bloomberg News – will offer additional percentage points of profit to the companies which can bring powerful optimization to a decades-old model.

Amazon is fit for this task, and it's going to finish the last segment of its food learning curve by studying the crown jewel of the grocery industry from the inside. As for all the other players in this space? They won't disappear overnight, but some familiar names are now seriously threatened by the tie-up of a natural foods behemoth and a ruthless retail innovator.