Thinking about retirement used to be enjoyable, but these days, people are more likely to feel stressed and worried when they consider their golden years. Given all the negative factors that are converging on future retirees, it's not surprising that people are concerned. But don't give up yet -- it's still possible to have a happy, well-funded retirement.

Every generation faces challenges when it comes to funding retirement, but this time, a number of different challenges are all coming together at once. First, the baby boomers are beginning to transition in large numbers from work to retirement, putting an unusually severe strain on Social Security and Medicare. Second, workers of all ages are lagging behind on where they should be with regards to their savings, meaning that when they retire, they'll be even more dependent on Social Security then past retirees.

Third, the Great Recession and its associated market crash did enormous damage to a lot of retirement portfolios. In fact, some workers' retirement savings accounts have yet to recover the value they lost due to the crash. And fourth, the huge drop in the stock market scared many workers into switching their retirement savings out of stocks and into other investments, which means that they missed the subsequent market rebound -- and their savings are now in assets that produce far lower returns than stocks do. 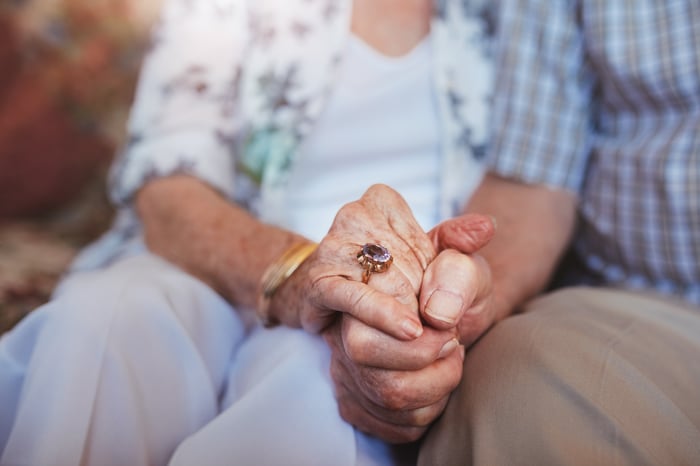 As it stands today, Social Security benefits are rarely enough to fully fund anyone's retirement. The average Social Security benefit in 2017 is $1,360 per month, which isn't exactly enough to provide a comfortable living. And future retirees may not even be able to depend on having that much money from the program. As more and more Baby Boomers retire, the balance switches from having more workers paying into Social Security than it does retirees receiving money, to the other way around. If nothing changes, by the year 2034, Social Security trust funds will be depleted and benefits will drop to 79% of their current level.

As for Medicare, the trust that pays for Medicare Part A benefits will be depleted by 2028. However, these grim figures are based on how these programs are currently funded. Should the government intervene by raising the taxes that fund Social Security and Medicare -- which is the most likely scenario -- the forecast could change drastically for the better.

Americans have never been very good at saving, and when you combine that characteristic with a major economic crisis that crushed returns on investments for years, the inevitable result is retirees who have little or no money saved to fund their retirement needs. A GoBankingRates survey earlier this year found that 29% of seniors age 55 and up had no retirement savings whatsoever, another 15% or so had saved less than $10,000, and roughly 8% had between $10,000 and $49,999 saved. That means over half of the seniors in the survey had less than $50,000 saved up, which doesn't even begin to be enough to fund a reasonable retirement.

Second, start working on a retirement plan for yourself. Various retirement calculators can help you figure out your likely expenses and determine how much you need to save now in order to meet your goals. Third, if you're behind on where you should be in terms of retirement savings, consider delaying your retirement date by a few years. Not only will that give you more time to save, it can increase your Social Security benefits check and thereby reduce the amount you need to have in your own savings.

Taking these steps may be all you need to do to avoid your own personal retirement crisis.